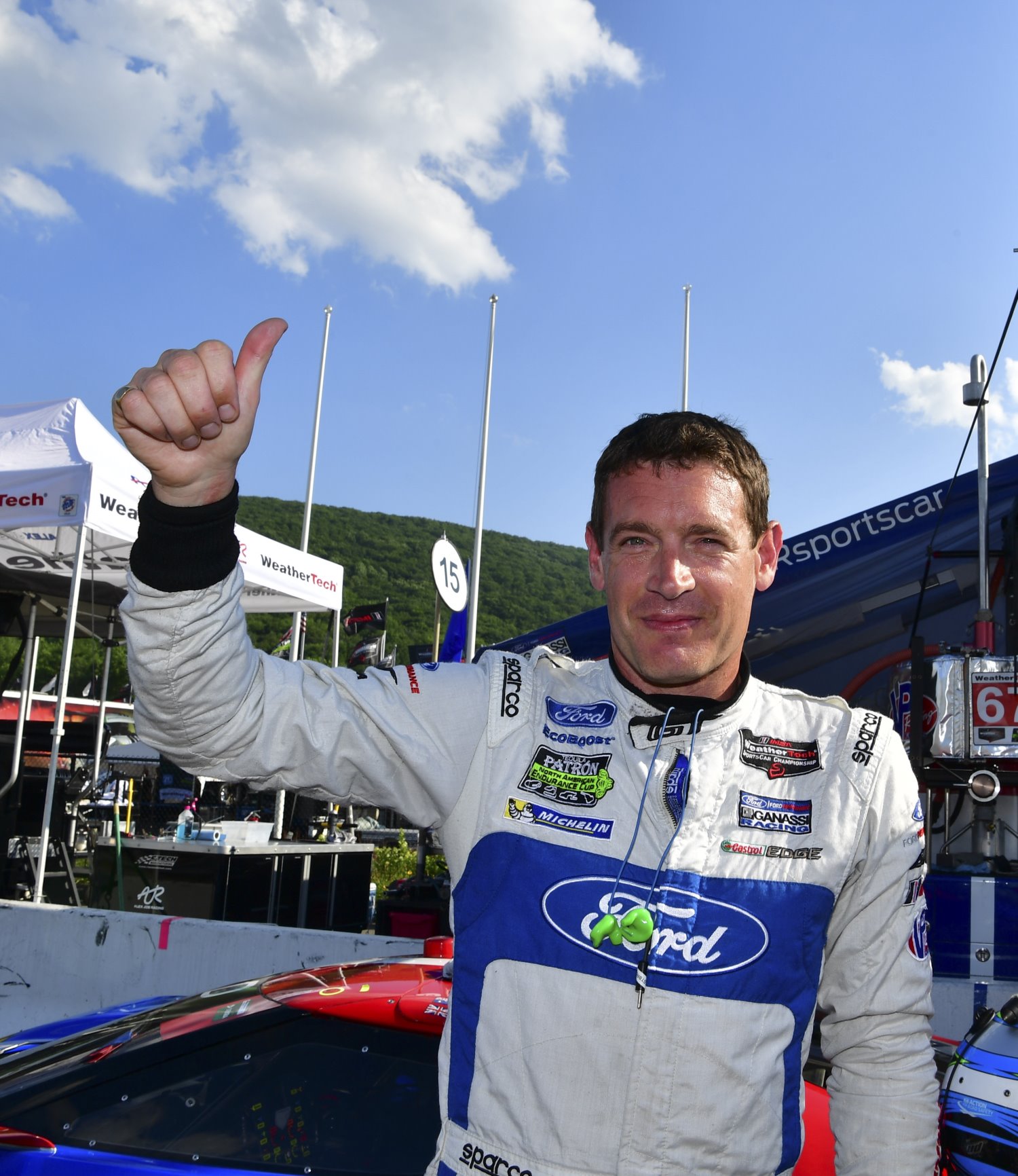 LAKEVILLE, Conn. — Apparently, the idea that it might be coolish in New England this time of the year is a cruel rumor, as the temperature at Lime Rock Park in Lakeville, Connecticut, was officially 95 degrees just after 4:30 p.m. Friday — at the same time, it was five degrees cooler in Atlanta and Orlando.

In GT Le Mans — the first time this class has been at Lime Rock since the American Le Mans Series era ended in 2013 — Richard Westbrook took the pole in the No. 67 Chip Ganassi Ford GT with a time of 50.748 seconds. The Ford GT has dominated GT Le Mans class since its first win May 1 at Mazda Raceway Laguna Seca — including winning the 24 Hours of Le Mans — but the session here closed under a red flag when the No. 66 team Ford GT driven by Joey Hand stopped on track, out of gas.

Second in GT Le Mans was the No. 25 Team RLL BMW M6 GTLM of Dirk Werner, which he shares with Bill Auberlen. Werner’s best lap was 50.835. Third was the No. 4 Chevrolet Corvette of Oliver Gavin and Tommy Milner, with Milner qualifying at 50.834.

The central concern Saturday, Westbrook said, is tire management. Michelin has three compounds, and the ultra-short 1.5-mile track has only one left turn, so mixing compounds could be the key.

As for the No. 911 and 912 Porsche North America 911 RSRs, which were strong in 2015 but have just one win between them this year: The team requested permission to return to the 2015-spec tires they used for medium-temperature conditions, and that permission was granted by IMSA last week.

But with the expected high temperature for the race Saturday, it remains to be seen if the ability to run last season’s rubber will be a factor. High- and low-temperature tires remain 2016 specification, but the good news is the Porsches respond well to the current high-temperature spec tire. It’s just that few here were expecting that to be the overriding consideration. The No. 911 qualified seventh, while the No. 912 was ninth in the nine-car class.

[adinserter name="GOOGLE AD"]It’s possible — perhaps probable — that some cars in GTLM could mix-and-match medium- and hot-temperature compounds, not only on the left and right side, but on the front and rear. And should the race come down to a final pit stop with a handful of laps left, it’s conceivable even a low-temperature setup might work as a Hail-Mary play at the end. Indeed, the tire engineers will be some of the most important people in the pits Saturday.

Spencer Pumpelly, fastest qualifier in the GT Daytona class driving the No. 15 Change Racing Lamborghini HuracÃ¡n GT3 with a lap of 53.148 seconds, said he could definitely feel tire grip fading fast toward the end of the relatively brief 15-minute qualifying session.

“I couldn’t believe there was anyone left on track at the end," Pumpelly said. His best time came on Lap 6, which was barely five minutes into the session.

Weather on Saturday is expected to be a bit cooler, but for Pumpelly and co-driver Corey Lewis, it will be a long, hot day — they are competing in the Continental Tire SportsCar Challenge race as well as the IMSA WeatherTech race, which is a total of five hours and 10 minutes of racing. “It’s a challenge," Pumpelly said, “but that’s why we train for it."

Andrew Davis was second in GTD qualifying in the Stevenson No. 6 Audi R8 LMS GT3 he co-drives with Robin Liddell, with a best lap of 53.222. Third was the sister Stevenson Audi, the No. 9 of Matt Bell and Lawson Aschenbach, with Bell laying down a lap of 53.222.

And in Prototype Challenge, to no one’s surprise, Colin Braun put the No. 54 CORE autosport Chevrolet-powered ORECA FLM09 on the pole with a lap of 48.824 seconds in the car he shares with Jon Bennett. Robert Alon was a close second at 48.840 in the No. 52 PR1/Mathiasen car he splits with Tom Kimber-Smith. Third was James French in the No. 38 with a time of 48.930 in the Performance Tech entry he shares with Kyle Marcelli.

Tomorrow, said Braun, will definitely be about tire management, but not to the degree it will be for the GT Le Mans class, because the PC cars have only one compound of Continental rubber available.

And hydrate. Be sure to hydrate.

The Northeast Grand Prix will air live on the FOX network Saturday at 3 p.m. ET.

"We needed to use qualifying as a test session. We had limited track time. The race is during the middle of the day in really high heat and this was a good opportunity in similar track conditions to evaluate what the car is like and see what the setup is like. I’m happy to get the pole. It wasn’t our primary goal for the session; Saturday is really the important one.

"There will be a lot of traffic tomorrow. For me as a driver, it’s fun. There will be frustrating moments for sure, but then there will be moments where it goes your way and you can make a pass and it kind of falls in your lap. Tomorrow will be about managing your tires and traffic more than it will be about raw speed and performance. It’ll be more about being smart and staying out of trouble and being aggressive when you need to be in traffic but knowing when it’s smarter to fight another day."