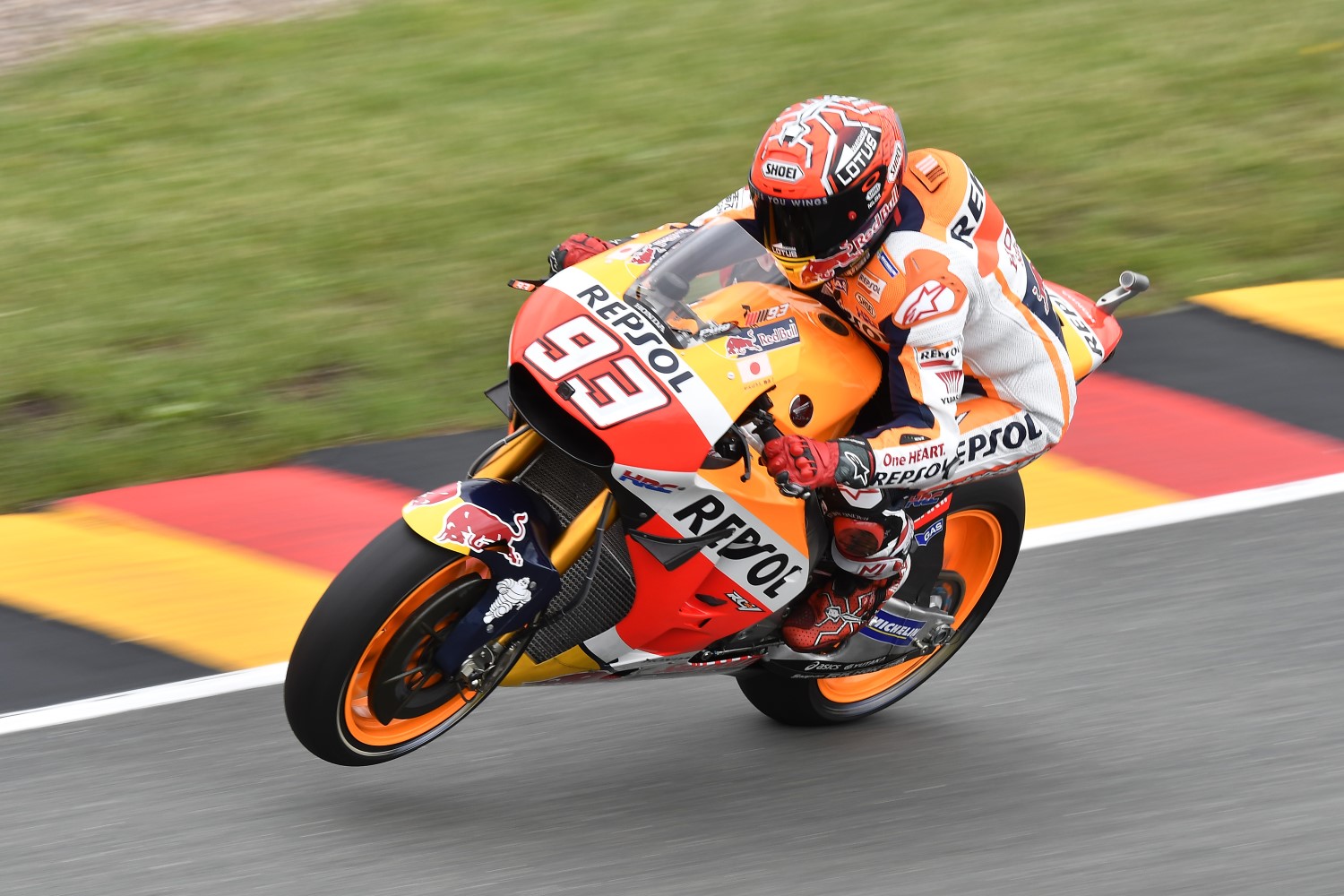 Marc Marquez’s incredible 1’21.160 lap time in today’s qualifying session at a much warmer and sunnier Sachsenring circuit earned him the 62nd pole of his career and the seventh in a row at the German track across all classes.

The Repsol Honda man has been among the top three in widely varying conditions this weekend, and he made a further step forward in qualifying after finalizing some additional details to the settings of his RC213V.

Most riders elected to do two runs, the field roaring out of the pits with under five minutes remaining. It was with this that the king of Sachsenring made himself known, Marc Marquez (Repsol Honda Team) setting a 1’21.160 to take his fourth straight pole position in the premier class in Germany. The Spaniard is looking to continue his perfect record at the Sachsenring, having won from pole for the last three years in the premier class and setting the fastest lap along the way. His incredible record extends even beyond that, having not stepped off the top step in Germany since his first win there in 2010.

Behind him was a marvelous Hector Barbera (Avintia Racing), the Spaniard taking his second ever front row start in the premier class. His first came back in 2012 at the Italian GP, on a Ducati for that race as well. Not only was he the leading Independent Team rider, but also the leading Ducati and the only Ducati man on the front row. Second place is Barbera’s best grid position in the premier class and his best Qualifying result since his last race in the 250cc class at Valencia in 2009.

[adinserter name="GOOGLE AD"]Valentino Rossi (Movistar Yamaha MotoGP) will complete the front row for the German GP, half a second off pole position. 'The Doctor' was pleased to stay on the front row after traffic got in the way during his second run on track with new tires. Rossi’s race pace looks strong enough to challenge Marquez and he’ll be hoping to end Honda’s domination of the German circuit. Having already failed to score on three occasions in 2016, he needs to get back on the podium.

Setting an identical time to Rossi, Danilo Petrucci (Octo Pramac Yakhnich) will lead the second row of the grid ahead of Pol Espargaro (Monster Yamaha Tech 3). Marquez may have had a distinct advantage with his pole time, but both Espargaro and Petrucci were within a tenth of second place.

Just as sectors started to flash red Jorge Lorenzo suffered his second crash within 30 minutes, coming off at Turn 1. His day could hardly get any worse, the factory Yamaha man set to line up in 11th. This is his worst grid position since he was 12th at the Dutch GP in 2013 after breaking his collarbone.

Andrea Iannone (Ducati Team) fell just five minutes into the session at Turn 1 as he began his second flying lap. It was a small crash but took valuable time away from the session and forced him to use his second bike.

Marc Marquez
“I’m happy to have set the fastest time today, because we’re better here than at other circuits. I have a fairly good pace and am riding comfortably. The final free-practice session wasn’t one of the best of the weekend, as I didn’t feel completely right but we made a change for the qualifying session, which went much better. We need to study the data this afternoon, but in qualifying we managed to take that step forward that we needed. We'll see what happens tomorrow, because the weather forecast is for conditions to be quite unstable. In any case, we’ll try to finish on the podium, which is our goal. It seems that Valentino [Rossi] is very strong, and we’ll also have to keep Dani [Pedrosa] in mind; I don’t know what happened to him in qualifying, but his pace is very close to ours and he’s very strong here."