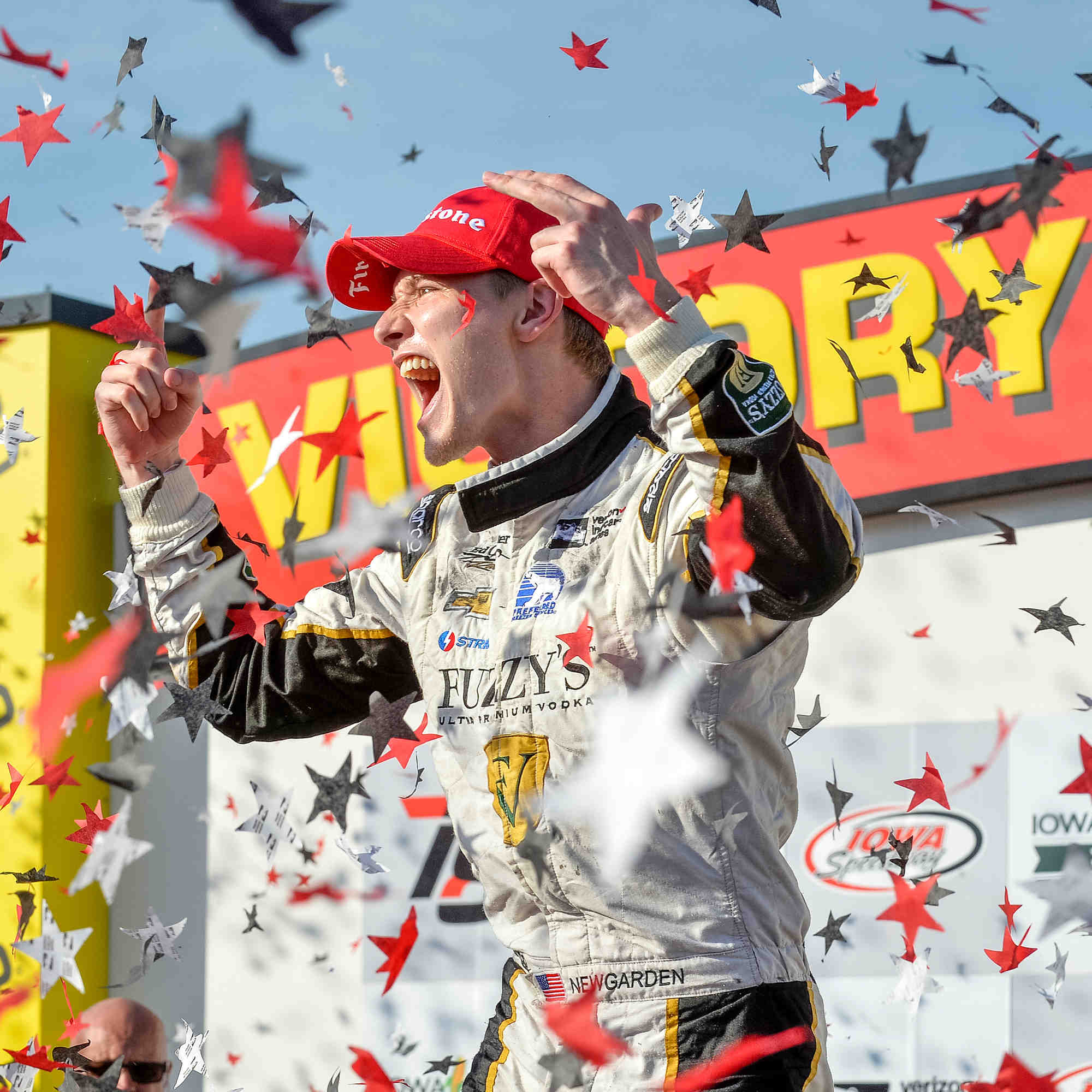 The Verizon IndyCar Series made its 10th annual pilgrimage to picturesque Iowa Speedway this past weekend. With its progressive banking and multiple grooves, the unique bullring nestled in the heart of America's Corn Belt has long produced very entertaining Indy car races.

And while the 2016 edition of the Iowa Corn 300 did feature a number of entertaining scraps, such battles were not to be found at the front of the field. Simply put, Josef Newgarden had other plans.

By now, you know the story. On June 12th, Newgarden suffered a broken right clavicle and small fracture in his right hand in a scary crash at Texas Motor Speedway. Defying any reasonable timetable for his return, the 25-year-old Hendersonville, TN native was back in the car less than two weeks later for the recent Kohler Grand Prix at Road America. Battling discomfort more in his wrist than shoulder, Newgarden soldiered home to an 8th-place finish in Wisconsin.

While his performance at Road America was admirable, Iowa promised to be a whole different kettle of fish. With drivers pulling up to 5 Gs every 4-5 seconds, at best, the most anyone could reasonably expect from the driver of the No. 21 Fuzzy's Vodka Chevrolet was another soldiering type effort a la Road America.

Of course, we got a lot more than that. Newgarden, starting on the outside of the front row, powered past pole sitter Simon Pagenaud at the start, and checked out from there. Only surrendering the lead during pit stops and at one point lapping all the way up to third-place, Newgarden led 282 of the 300 laps and managed something we rarely seen this era of spec cars, and rules favorable to competitors behind the leader: complete and thorough domination.

[adinserter name="GOOGLE AD"]The timing of Newgarden's dominant performance certainly was not lost on the TV broadcast team. This is of course, the time of year, when people at least begin talking about potential driver movement for the following season. And although this applies to most drivers in the series, it was repeatedly stated during the broadcast team: Newgarden is a free agent for 2017.

Of course, given everything from talent in the car to an all-American likability and polish outside of it, Newgarden seemingly checks every box of appealing attributes a top race team. Thus, many have treated his move to a power team as something of an eventuality for the past few years.

And it still probably is. However, if young Josef is to make a move in 2017, a simple question must be asked.

Let me be clear, that what follows is what I would call informed speculation, and not to be taken as Gospel. That said, any discussion of Newgarden's future begins with the series top two teams: Ganassi and Penske.

Although some people mention Andretti Autosport (how bad were they this weekend btw?), as a possible landing spot, one has to think that if Newgarden does in fact have options, he will opt for a Chevrolet team, Thus, it could be argued (assuming everyone stays with current manufacturers), Honda-powered Andretti Autosport – unlike when Ryan Hunter-Reay resigned with the team a few years back foregoing a reported opportunity to join Penske – is currently a lateral or even backward move from the Chevy-powered Ed Carpenter Racing.

Some have also suggested that it is better for the series for and perhaps even Newgarden himself to stay with Ed Carpenter Racing, where he is the clear Face of the Franchise, if you will. The part about it being good for the series could be a discussion, but is in my opinion, irrelevant. Nothing against the strong team ECR has built, but if you're an IndyCar driver and Penske or Ganassi come calling, you make the move. Period.

Therefore, for the purposes of this discussion, we will center on Ganassi and Penske.

To start, two of the Ganassi cars (Nos. 8 & 83) are very much tied to sponsorship attached to the respective drivers. Presuming Newgarden hasn't raised money for a ride (he's never been thought to have significant backing), those two seats would be eliminated. Also, the thought of Scott Dixon, still only 35, leaving Ganassi any time soon, is for a variety of reasons, unimaginable.

That leaves the only logical landing spot at Ganassi for Newgarden as the No. 10 car currently occupied by Tony Kanaan. At 41, the 2004 series champion likely won't be driving for Ganassi in five years. Still, the Brazilian remains very competitive and is thought connected at least to some degree with the NTT Data sponsorship on the car.

I suppose its possible Ganassi could arrange a deal in which he opts for Newgarden over Kanaan. But going off what we know, there is no clear vacancy at Ganassi for Newgarden.

The first question regarding Team Penske in my opinion is will he remain at four cars for the foreseeable future? Without knowing the sponsorship situation, this is impossible to answer, and The Captain has yet to contact me with the exclusive story (contact info below, Mr. Penske).

Also, we know Penske plays things VERY close to the vest, as we saw in the Pagenaud and Montoya signings. But assuming four cars, I doubt The Captain plans to part with Power and Pagenaud anytime soon. Like Dixon, both are elite-level drivers in the prime of their careers. That leaves Helio Castroneves and Juan Pablo Montoya, both on the north side of 40, as the possible drivers to make way for Newgarden.

Now, if you apply regency bias it would be Montoya, not Castroneves to give way. While the Colombian seemed rejuvenated joining Penske in his return to IndyCar a few years ago, a tough stretch since winning the opener at St. Pete leaves the Colombian outside the top-10 in points, and showing signs of the apathy he is known for when things aren't exactly going his way.

That said, the situation is far from clear. For one, although he can be something of a grump, I doubt Montoya will just walk away on his own accord from a Penske ride. Also, while Castroneves and Montoya are like Kanaan in that they probably won't drive five more years, two-three more years isn't unreasonable. Plus, Castroneves and Montoya unquestionably offer Penske the chance of something we know he craves more than anything else: winning the Indy 500 in any given year. Yes, both have a sparkling record at Indianapolis, a race Newgarden was competitive in for the first time this past year.

The above may have been a little long-winded. But let the record show: while Newgarden landing at Penske or Ganassi may be an inevitability, that doesn't mean it will happen in 2017.

The win vaulted Newgarden to second in the championship, which not surprisingly, also reignited something that is fast becoming a tired conversation. I'm talking of course, about the paused race at Texas, in which the afore-mentioned crash between Newgarden and Conor Daly knocked both cars out on lap 42. The ensuing caution, which coincided with a rain delay, meant the race would be paused on lap 71.

INDYCAR made the decision to restart the race, which began June 12th from the point of interruption and complete the final 172 laps on August 27th. James Hinchcliffe will be the race leader when the green flag is thrown on lap 72. Due to their damaged cars, Newgarden and Daly will not be allowed to restart the race.

Numerous people have called for INDYCAR to simply start the race over on August 27th, a central argument being that the spectators deserve a full race. Also, the 21st-place finish that Newgarden will sustain is a definite blow to his championship hopes.

And let's face it: Texas is a very unique situation. I can't recall a racing series leaving a facility mid-race to come back and finish the race 11 weeks later. Granted, this isn't a criticism, as circumstances dictated the decision. Further, circumstances are dictating that teams will be allowed to change fuel, engines, tires, setup, etc.

Because of that, I see no reason why Newgarden and Daly wouldn't be able to do the same and start 29 laps down. While Daly would have little to gain, Newgarden could potentially make up a few positions for his championship charge. I could also see the logic in the series extending the race distance to say 200 laps, giving the paying customer a little more bang for the buck.

All that said, one thing I am firmly dead-set against is the notion of restarting the race from lap one. The series waved the green flag on June 12th, and 22 cars assumed the risks that come with racing competitively. Most notably, of course, Newgarden, essentially rolled across the track on his head. For the series to simply pretend those laps didn't exist and not acknowledge the fact the drivers took the green flag with the intent of racing would be a shortsighted precedent.

Yes, there might be one or two things I'd tweak about the paused race at Texas. But generally speaking, I think INDYCAR has handled an incredibly unique situation correctly. And in all honesty, many of the loudest yelpers banging the drum to start the race over, should know that.

Due to a family function, I didn't make the pilgrimage to Iowa, as I have the past three years. However, having seen both day and night races there, let me tell you: night races are better. The race will also be Sunday afternoon in 2017 and 2018.

While I get why the race was during the day (avoiding a head-to-head with the Kentucky NASCAR race), I'd like to see track president Jimmy Small and INDYCAR corroborate on a plan for a night race going forward. Simply put, Iowa Speedway was made for night racing. And while you can say that is just my opinion, from what I can tell, many potential ticket-buyers expressed that sentiment as well.

I've maintained for much of the season that although he doesn't' have the results to show for it, Simon Pagenaud aside, Helio Castroneves has been the most consistent driver in INDYCAR in 2016.

At Iowa, Castroneves ran in the top-five most of the day. However, due to early pit stops in 2 sequences, Castroneves lost laps. This, of course, is a danger at Iowa where the average pit delta is two laps.

Granted, no one was catching Newgarden. Still, Iowa was another example of a theme we've witnessed throughout 2016: Castroneves is getting KILLED on pit road.

No, I'm not bearing the responsibility of meeting payroll and keeping the lights on in a racing shop in this difficult economic climate.

That said, aside from adding one car to the grid, someone such as Pastor Maldonado in my opinion actually does more harm than good for the series. If IndyCar wants to develop REAL fans, who follow the series, they must give people a reason to CARE, which means giving fans people to CARE about. And people have never and will NEVER care about marginal drivers backed by corrupt third-world governments.