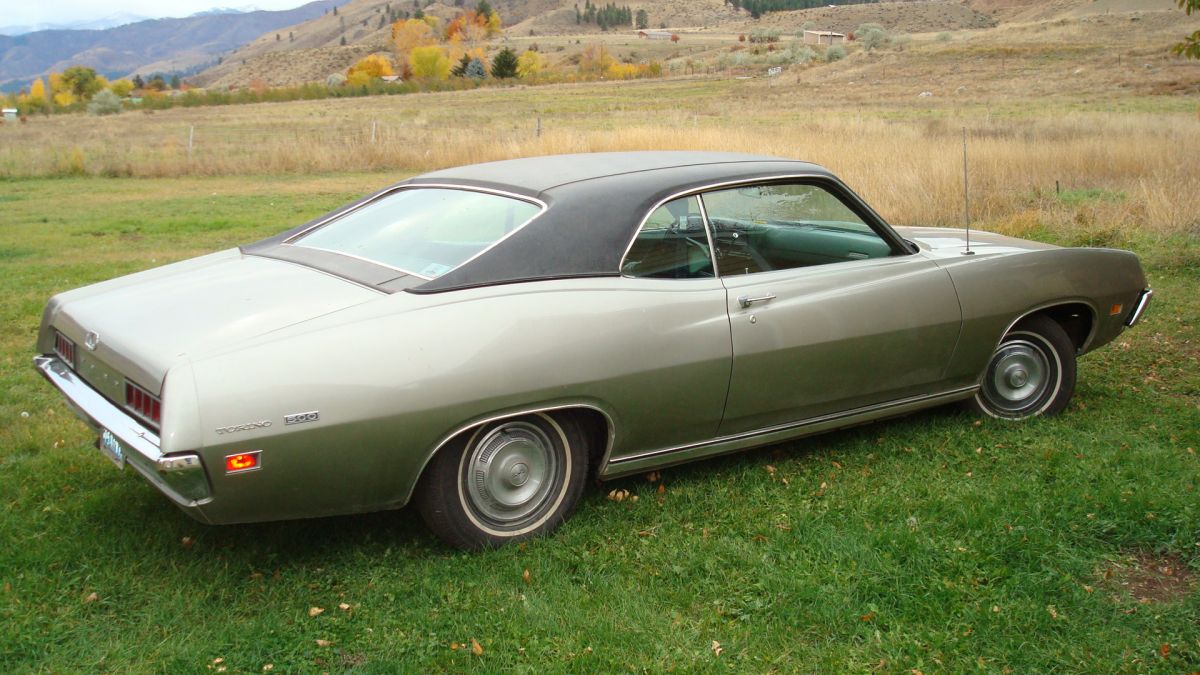 In 1970, everyone took a two week vacation once per year. It was as American as apple pie. Two of the era's great, economical mid-sized cars perfectly suited for such epic road trips were Ford's Torino and the Cutlass from Oldsmobile.

Both can be purchased today on the collector car market at prices that Average Joe can afford. Either model is a prime candidate for your upcoming road trip adventure on legendary thoroughfares like Route 66, so I couldn't resist a head to head comparison.

My '67 Cutlass was equipped with a 330 cubic inch engine (which would give way to the famed 350 small block the following year) and GM's 2-speed Jetaway transmission. I drove this car daily for two years along Indiana's famous US Route 40 and Highway 144 and found it fun, a bit quirky and very reliable.

Oldsmobile's edge in horsepower was immediately evident. Even when strapped with a Rochester two-barrel carburetor it managed a sturdy 250 horses compared to the Torino's 210, sufficient to break rear wheel traction with a stomp of the throttle in low gear.

No one will mistake the slushy, 2-speed gearbox as a performance tranny. But in fairness, this is a road trip comparison not a drag race. And I must say that the Jetaway transmission was truly a joy for standard touring duties. It pulls strong through any reasonable rev range required for a road trip.

[adinserter name="GOOGLE AD"]Thou shall not want for cargo storage either, as the Cutlass offers a cavernous 20 square feet of trunk space. As with most cars of its era, the front bench seat in the Olds feels as wide as an aircraft carrier. Driver controls, and the AM radio in particular, are amazingly ergonomic for 1967.

When tilting the front seat forward in a two-door Cutlass of this era, the throw is greater and the distance is shorter than on the Torino. The Ford makes you bend more and reach further to place luggage in the rear seat.

However, the Oldsmobile drives like a truck. It's big. Really big. The Cutlass sits high on its tires and its springs are tightly wound, giving the driver a solid but disconnected feel even for a 1960's design. That's not to say it's uncomfortable. On the contrary, the car is driver friendly and stays even-tempered over silky smooth roads and potholes alike. But be warned. A truck-like ride is the price you pay.

I've owned multiple Ford Torino's but for the sake of comparison my first one was used for this test. It's a common formal hard top coupe with a 3-speed automatic and a small block 302 engine.

Let me say right up front that while the 302 is a legendary power plant with enough oomph to move the Torino at satisfying velocities, its 210 horsepower is simply outclassed by the Oldsmobile 330. Further, the Ford suspension feels soft and cushy compared to the Cutlass, especially during spirited cornering.

But after two hours of driving on Old State Road 135 north of historic Corydon and into Louisville, the Torino begins to win your heart. The steering wheel sits lower, within easy reach. The car has plenty of body roll while cornering, but that same suspension travel eats up small road bumps for a pleasant ride. The old fashioned foam-rubber-over-coil-spring seat sits lower than the Olds and works seamlessly with the Jello-like suspension to make the car endlessly drivable

With or without air conditioning the Torino remains easy to inhabit. The hard top's design facilitates magnificent air flow; simply roll all four windows down and enjoy a comfortable ride even on a warm day.

The radio controls are a bit low and too centered for easy reach, but if your wife is a channel surfer she will appreciate the passenger's easy access. Overall, the Torino provides comfort, impeccably designed internal air flow when the windows are rolled down and generous gobs of 1970's style.

And the winner is…

The claim “There are no losers" is usually a coward's way out, but in this case it's the absolute truth. If one of these cars was clearly better for a 1970-style road trip down Route 66, I would say so. There's just not.

Oldmosbile fans will point out the classic lines, superior engine power and the sturdy feel of the Cutlass. And they'll be right.

Ford fans will recall that the Torino's spectacular version of “Coke bottle" styling won Motor Trend's Car of the Year award when it was introduced in 1970 and it held the nation captive with its breathtaking good looks and forward-thinking design. They're right, too.

You'll have to make up your own mind. I've owned them both for years and I still can't decide.