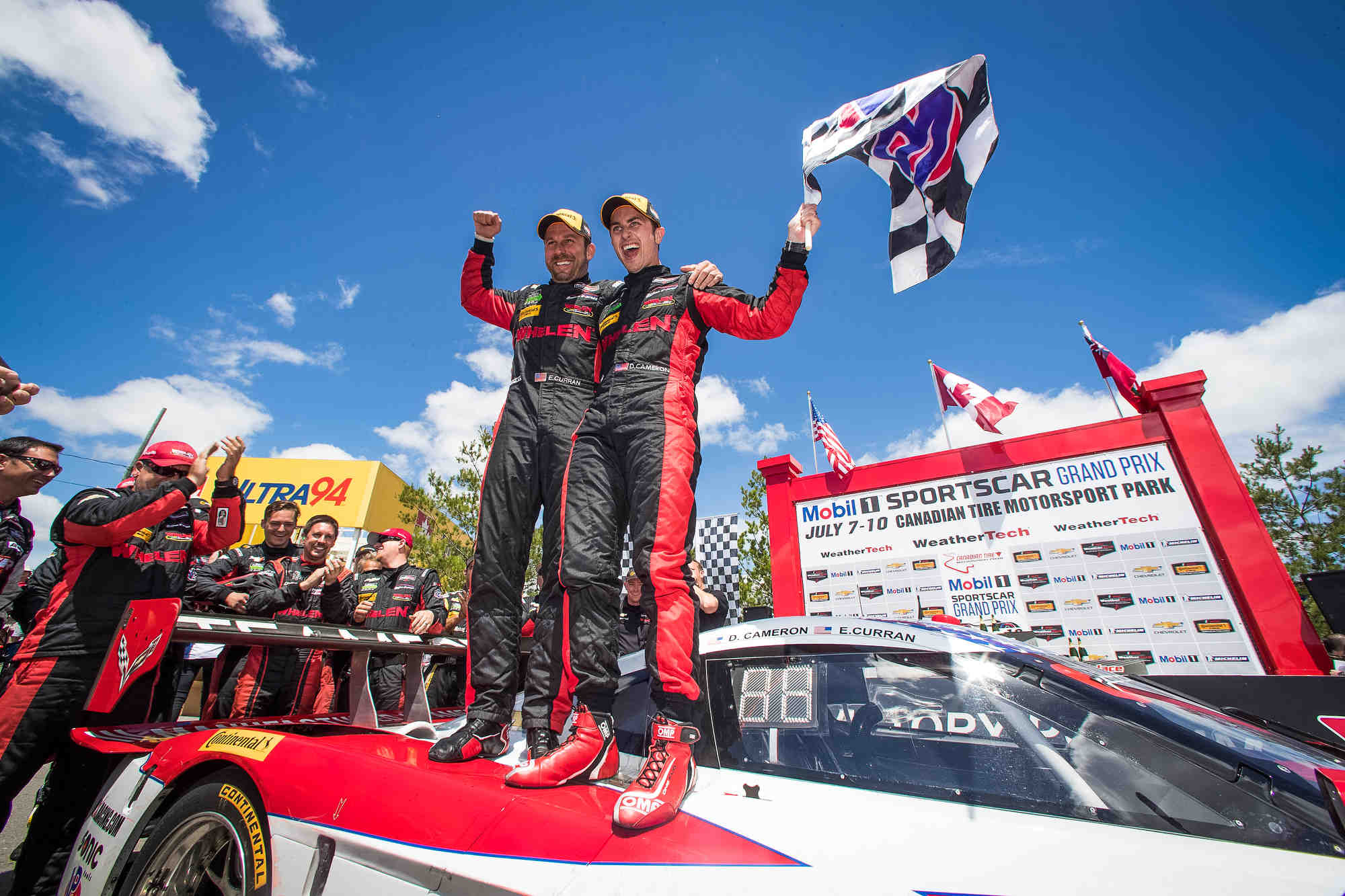 It was another one-two finish for the Action Express Racing Chevrolet Corvette Daytona Prototypes, this time at the Mobil 1 SportsCar Grand Prix at Canadian Tire Motorsport Park in Bowmanville, Ontario.

The finish was reverse that of last week’s Sahlen’s Six Hours at the Glen. The No. 31 Whelen entry of Dane Cameron and Eric Curran finished just ahead of the team car, the No. 5 Mustang Sampling Corvette of Joao Barbosa and Christian Fittipaldi, which remains in the Prototype points lead, with the No. 31 car close behind.

The top four cars were all Corvette DPs, as the No. 10 Wayne Taylor Konica Minolta entry of brothers Ricky and Jordan Taylor was third, and fourth was the No. 90 Visit Florida car of Ryan Dalziel and Marc Goossens.

In Prototype Challenge, the No. 54 CORE autosport Chevrolet-Oreca FLM09 started from the pole thanks to the qualifying run of Colin Braun, who finished out the race in front, too, after a starting stint by Jon Bennett. Second was last week’s winner at Watkins Glen International, the No. 8 Starworks car of Renger van der Zande and Alex Popow. Third was the No. 52 PR1/Mathiasen car of Robert Alon and Tom Kimber-Smith.

It wasn’t as easy as it looked, said Braun. “We had mechanical problems at Watkins Glen and didn’t finish," he said, so the team had less than a week to prepare their backup car. They made a lot of changes on setup, but it was consistently the fastest car in the class.

Between last week’s race and this week’s, sanctioning body IMSA made some rules changes in the GT Le Mans class regarding weight and engine power that were designed to slow the Ford GTs a bit, and speed up the Corvette Racing C7-Rs and Porsche North America 911 RSRs, which were about a second and a half slower per lap than the Fords and BMWs at Watkins Glen.

[adinserter name="GOOGLE AD"]It worked, but pit strategy still gave the No. 67 Ford Chip Ganassi GT its third straight win in the IMSA WeatherTech series, which is four straight for the team if you count the No. 66’s class victory at the 24 Hours of Le Mans. Richard Westbrook and Ryan Briscoe managed to run the last hour and 20 minutes on one set of Michelin tires, which gave them track position over their main competition, which took fresh tires. “It was a great call by the crew," said Westbrook. “Winning becomes a habit, they say, and it feels like it now."

Second was the No. 4 Corvette C7.R of Oliver Gavin and Tommy Milner, who still have the points lead, but the No. 67 drivers are closing in. Third was their team Corvette, the No. 3 of Antonio Garcia and Jan Magnussen.

In GT Daytona, it was the first class win the year for BMW, courtesy of the No. 96 Turner Motorsport BMW M6 GT3 of Jens Klingmann and Bret Curtis. “The race just fell to us," Curtis said, as some of their central competitors had problems, such as the polesitting No. 23 Alex Job Racing/Team Seattle Porsche 911 GT3 R of Mario Farnbacher and Alex Riberas, which lost a left front wheel on the track. “The car was solid, so we just kept our pace and stuck to it."

Second was the No. 6 Stevenson Motorsports Audi R8 LMS GT3 of Robin Liddell and Andrew Davis, followed by the No. 48 Paul Miller Racing Lamborghini Huracan GT3 of Brian Sellers and Madison Snow.

Once again, it was heartbreak for the Mazda Prototype team. The No. 55 of Tristan Nunez and Jonathan Bomarito qualified on the pole, and Nunez kept the car either in front or close to it until he turned the car over to Bomarito. But with an hour and 25 minutes left in the two-hour, 40-minute race, Bomarito pulled off the track with a right rear suspension failure. The No. 70 team car of Tom Long and Joel Miller finished a respectable fifth, but never threatened for the win.

It’s the first time the IMSA WeatherTech SportsCar Championship has hosted all four classes at the relatively short 2.459-mile road course, and with 37 cars competing, drivers found themselves either passing or being passed in traffic almost constantly.

The last few minutes of the race saw crashes by both the No. 0 DeltaWing Prototype with Sean Rayhall driving, and Andy Lally in the No. 44 Magnus Audi GT Daytona car. Both cars went into the tire wall in separate incidents – the DeltaWing was able to drive away, but the Audi couldn’t move, and the yellow flag flew.

Next up for the IMSA WeatherTech SportsCar Championship is the Northeast Grand Prix at Lime Rock Park in Connecticut, on the even-shorter 1.5-mile road course. The race is scheduled for July 22 and 23. Visit IMSA.com for more information.

DANE CAMERON, ACTION EXPRESS RACING NO. 31 WHELEN ENGINEERING/TEAM FOX CORVETTE DP – PROTOTYPE RACE WINNER: “It’s certainly a nice feeling to feel like we’ve gotten the monkey off our back here at Canadian Tire Motorsport Park. Throughout my career, I don’t think I’ve ever been off the podium but I had never won here. It’s a really nice feeling to finally get that. Last year we came so close with an extra pit stop and a small issue but still nearly won the race. It’s really nice to get some redemption from all those ‘what ifs’ and ‘almosts’. Our Corvette DP was awesome all day; it was so good in traffic and so good in clean air. Once the Action Express boys got us to the front, we could really set the pace with our Whelen Corvette. Once we got to the front, no one could touch us and we could control it from there. It’s really fantastic day for Action Express to be 1-2 again. We inched our way toward the front in the Driver’s Championship, which is the goal. A big thanks to Whelen Engineering and Sonny Whelen for the chance to drive this car."

ERIC CURRAN, ACTION EXPRESS RACING NO. 31 WHELEN ENGINEERING/TEAM FOX CORVETTE DP – PROTOTYPE RACE WINNER: “What a day! It’s so much fun to move up one position from last year after finishing second. This Whelen Engineering Corvette DP was spot-on. It was a tough start to the weekend with all the rainy conditions, and qualifying was tough. I had a reasonable run at the beginning of the race but traffic was tough. The pit stops were unbelievable. The Action Express guys just nailed the pit stops. We kept jumping cars on every stop. Dane did an amazing job right to the end. I feel like I have the best team, the best crew, the best sponsors and the best teammate. I’ve won a lot of races here in a red-and-white Whelen Corvette, so it’s nice to get back up on that top step. I love coming to this track; it’s so much fun. Hats off to the crew, Whelen Engineering, Sonny Whelen and Team Chevy. It’s nice to have a 1-2 finish again for the second week in a row."