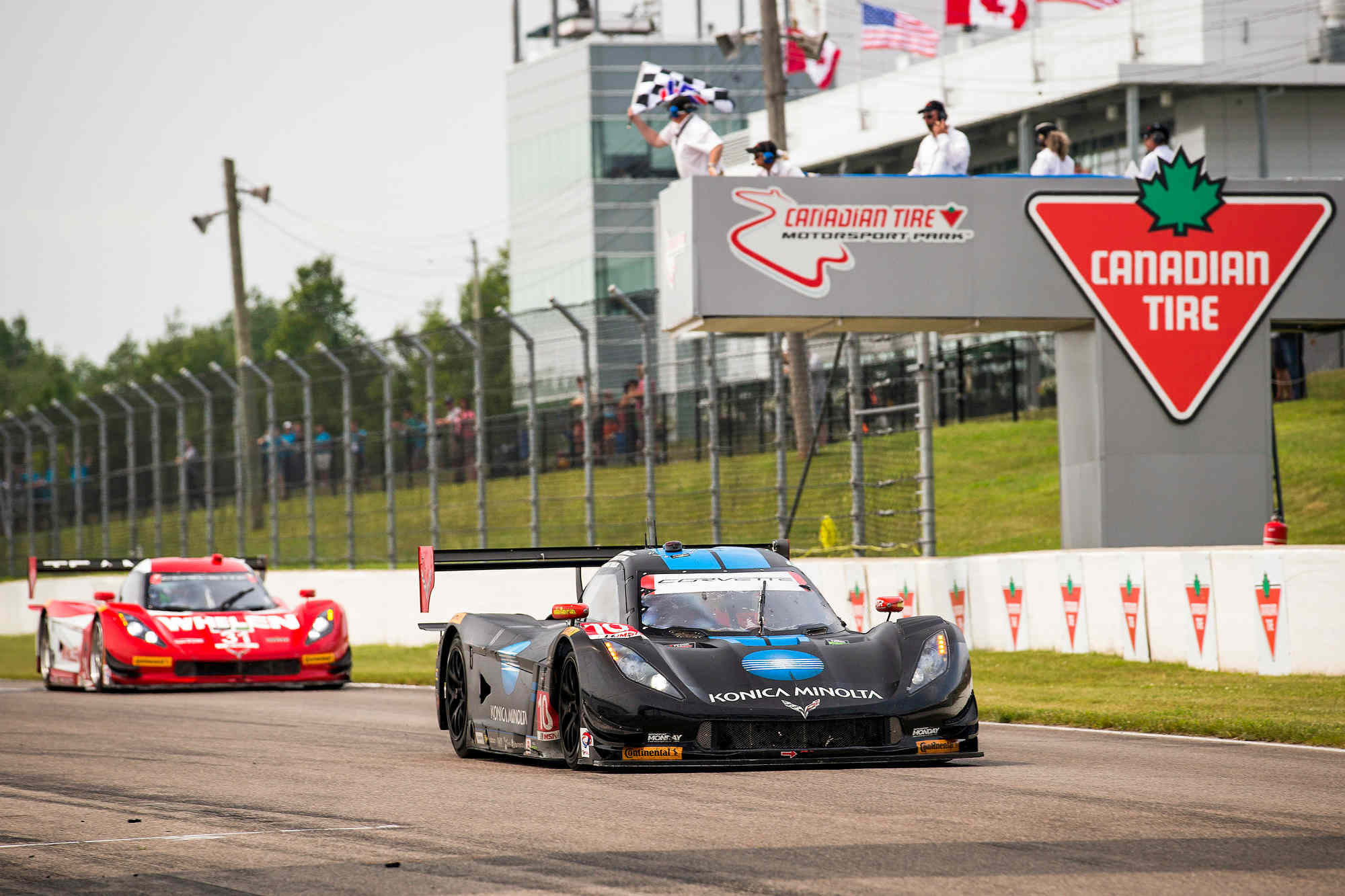 DAYTONA BEACH, Fla. – Teams in the IMSA WeatherTech SportsCar Championship are far smaller than teams in series that typically race every weekend, like the NASCAR Sprint Cup Series, so getting ready for this weekend’s Mobil 1 Sportscar Grand Prix at Canadian Tire Motorsports Park in Ontario, less than a week after the checkered flag fell after the grueling Sahlen’s Six Hours at the Glen, is a challenge.

Sprint Cup teams typically have one crew back at the shop readying cars for next week’s race, often loading them into a separate truck bound for that track, rather than waiting for the truck and car to return from the last race. Sports car teams don’t have that luxury.

This is the only time in the 12-race WeatherTech Championship season that events are scheduled back to back, so expect to see some tired faces at Canadian Tire Motorsport Park, especially on the crewmembers who work on cars that did not fare well at Watkins Glen International.

One of those was the CORE autosport No. 54 Prototype Challenge car, which suffered a suspension problem at Watkins Glen.

“Back-to-back races are a challenge for the crew to prepare the cars and get everything turned around within a few days," said Colin Braun, co-driver with Jon Bennett. “For the drivers though, it’s pretty straightforward. We’re staying on the road and not going back to the shop, which adds to the challenge. The guys had to be prepared and organized as they left the shop so that they were not only ready for Watkins Glen but for Mosport, too."

[adinserter name="GOOGLE AD"]The good news is that when the teams do get to Canadian Tire Motorsport Park they’ll be at a track most everyone loves. It’s a 2.459-mile road course with 10 corners, some of them extremely fast.

And it isn’t easy. “It’s a very physical track where, the G-loads affect your neck and back," said Tom Long, co-driver of the No. 70 Mazda Prototype. “Your core must be very tight to hold your body up. Even though the seatbelt holds you in and the seat is wrapped around you, you still have to hold the helmet up and keep your body in the right stance to control the throttle and braking correctly.

“It’s really tough on the cars, too. I’ve seen power steering systems fail because of the strain from the immense G-loads. It takes a lot of strength and a lot of endurance for the car and driver. That plays into a full team effort to have success there."

While the P2 Prototypes – such as the two Mazdas and the Honda-Ligiers of the No. 60 Michael Shank Racing team, and the No. 2 Tequila Patron ESM team – were typically the fastest cars at Watkins Glen, in the end, the victory went to the Daytona Prototypes of the Action Express stable, which finished first and second.

First was the No. 5 Mustang Sampling Chevrolet Corvette DP, followed by the No. 31 Whelen Corvette DP team car. The high speed of the Canadian Tire course is expected to favor the extra downforce of the P2 cars, but don’t count out the Daytona Prototypes. The No. 5 of Christian Fittipaldi and Joao Barbosa was leading the event last year until a cut tire with just 11 minutes to go put them out of contention.

With the win at Watkins Glen, Fittipaldi and Barbosa took possession of the points lead, with the two drivers in the No. 31 car, Dane Cameron and Eric Curran, tied for second with No. 10 Konica Minolta Corvette DP co-drivers Ricky and Jordan Taylor, who won at Canadian Tire Motorsport Park last year.

In the GT Le Mans class, the Ford GTs will be looking for their fourth straight sports car victory, having won at Mazda Raceway Laguna Seca, the 24 Hours of Le Mans, and last week at Watkins Glen, they finished 1-2. It won’t be as easy, though, as the IMSA sanctioning body is slowing the dominant Fords with an extra 33 pounds of weight, and less turbo boost. And it’s giving the Corvette C7.Rs a weight break of 22 pounds, and larger air restrictors to the engine. The Porsche 911 RSRs also get a 22-pound weight reduction.

At Watkins Glen, the Corvettes and Porsches lagged well behind the Ford GTs, with the fastest lap time recorded by a Ford GT about a second and a half quicker than the fastest Corvette. Still, the Corvette team of Tommy Milner and Oliver Gavin carry the GTLM points lead into Canada, but the margin is shrinking.

[adinserter name="GOOGLE AD"]In the GT Daytona class, the Audi R8 LMS GT3s and the Ferrari 488 GT3s will have to carry an extra 33 pounds, and the Porsche 911 GT3 Rs must add 22 pounds. At Watkins Glen, a Ferrari won, followed by an Audi and a Porsche. Christina Nielsen and Alessandro Balzan were driving the winning Scuderia Corsa Ferrari, and are the points leaders.

In Prototype Challenge, expect no changes, as the Starworks No. 8 ORECA-Chevrolet, which won the pole and the race, could be as dominant in Canada with drivers Renger van der Zande and Alex Popow as it was in New York. That team is also leading the points.

Sunday’s Mobil 1 SportsCar Grand Prix will be presented live on FS1, beginning at 11 a.m. ET. IMSA.com and the IMSA mobile app will stream WeatherTech Championship qualifying along with the Continental Tire Challenge race, and also will carry IMSA Radio plus live timing and scoring throughout the weekend.