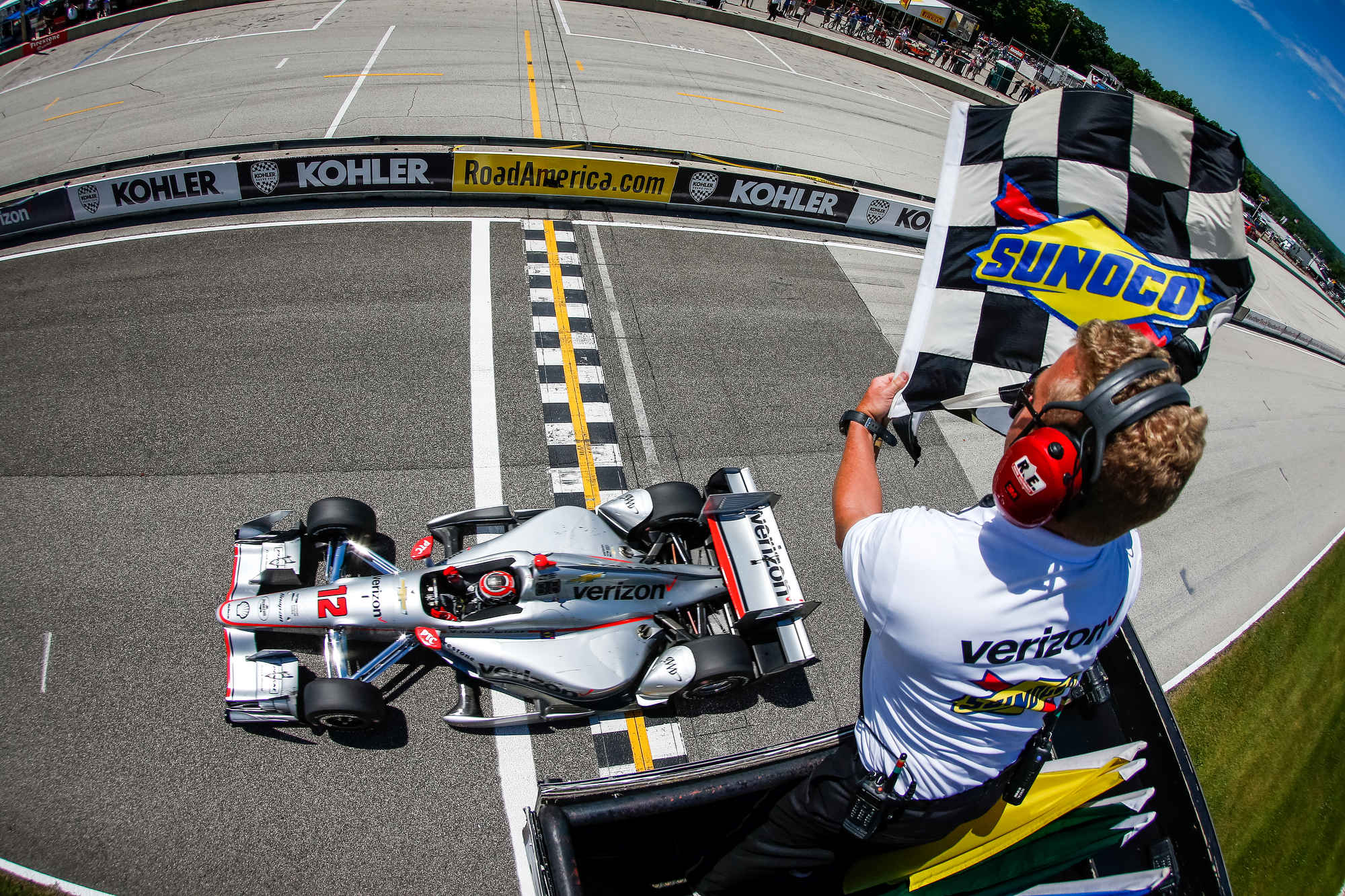 I don’t really have a ton to add to what has already been said about this Indy Car racing’s return to Road America this past weekend. I’ll just note that having made my first visit to the racing cathedral in Wisconsin’s Kettle Moraine country, Road America is absolutely everything it is cracked up to be and more. And judging from the reaction of a very happy paddock, the Road America track staff, the thousands of fans that packed the hills and grandstands and the overall atmosphere at North America’s finest road racing circuit, the Verizon IndyCar Series added another much-needed cornerstone event to its schedule this past weekend.

Because AR1 President Mark Cipolloni has already done a more than adequate job of detailing Indy Car racing’s return to Road America, I’ll focus on some of the other storylines that emerged from the weekend, beginning with a former series champion, who appears to be rounding into form at just the right time.

[adinserter name="GOOGLE AD"]While it wouldn’t be entirely fair to say Will Power had been in a slump, the 2014 series champion endured a relatively long by his standards winless drought from May of 2015 to the 2nd Detroit race earlier this month. Fast forward to Sunday, after a convincing second consecutive win in Sunday’s Kohler Grand Prix, and the driver of the No. Verizon Team Penske Chevrolet Power seems to be back on point and driving with as much confidence as ever.

If we know anything about Power it’s that he’s much more comfortable being the hunter than the hunted. Throughout his career, the Aussie has done his best driving when he hasn’t been in a position of having something to protect. In other words, Power’s best driving seems to come when he is behind in the overall standings not out in front. Might we be in for a late-season title charge from the Aussie?

This brings me to my next point…

Power’s impressive win Sunday and recent run of form, for now at least, does nothing to change the narrative of the 2016 season. With a series-high three victories, four pole positions, and six top-2 finishes, the story of 2016 is Power’s Team Penske teammate Simon Pagenaud. The Frenchman currently holds a 74-point lead over teammate Helio Castroneves with Power 81 points adrift in third.

What has changed of course is that what was shaping up as a runaway championship charge a month ago, has encountered some unexpected road blocks. After recording six top-2 finishes in the first 6 races, Pagenaud has finished outside the top-10 in three of his last four starts.

Now, from a sheer results perspective it would be easy to say Pagenaud has begun to slip up. However, keep in mind, the Frenchman was in position for a top-3 finish at Detroit 1 before he ran out of fuel, then was second late in Sunday’s race before an engine misfire. In other words, the Frenchman is still regularly running in the top-3, and has been in contention to win every race this season barring the Indianapolis 500.

Yes, Power is the hottest driver in the series, and Pagenaud’s recent results have cast doubt on the notion that he will run away with the championship. Still, anyone who is going to track down the Frenchman in 2016, has a monumental task in front of them.

The way things are currently looking, I can tell you one person who isn’t going to track down Pagenaud: Juan Pablo Montoya.

Montoya, of course, shocked the racing world less than three years ago (remember how big of a surprise this was?), when he announced he would return to Indy car racing with Team Penske after a seven-year stint in NASCAR. Many wondered then how he would do; would he readjust to high downforce formula cars after years of driving the heavier stock cars on mostly oval tracks; and given the weight he added during his NASCAR years people wondered both silently aloud if would he even be able to fit into an Indy Car?

Fast forward nearly three years and from any perspective, one would have to say Montoya’s return to Indy Cars has been a success. JPM got himself in shape and came out of the gate strong in his IndyCar return, winning from pole at Pocono his first season. Then, in season two, Montoya won the opening race at St. Petersburg, before capturing his second Indianapolis 500 win. Further, the Colombian led the season championship all the way from St. Petersburg until the finale at Sonoma, when Scott Dixon edged him for the series title.

While he has had some strong runs in 2016 – including a victory at the opening race at St. Petersburg – JPM has become something of the forgotten man at Team Penske. Sunday at Road America he finished a respectable 7th Sunday, but was never a factor.

To be clear, I’m not throwing dirt on the grave of JPM’s career after a few less than inspiring runs. However, given that his teammates 1-2-3 in the championship, JPM isn’t exactly know for his grace under duress, and that there has to be a part of Montoya which acknowledges he has plenty of trophies, a family and more than enough money to the point he asks: do I really need this anymore?

If someone decides that Montoya is not going to drive for Team Penske next year or anytime in the future, it will be Roger Penske who makes that decision, not Montoya. However, if there is a leader in the clubhouse to be the one to make way for a Josef Newgarden-type – if and when that decision is made – I think the first half of 2016 has given us that answer.

Since there was no race run to completion at Texas, I never wrote a postscript for the rather bizarre visit INDYCAR made to Texas Motor Speedway earlier this month. Because I never wrote a postscript, I never got the chance to mention one of the best and certainly most spontaneous PR moves I’ve ever seen by any group of athletes in any sport: James Hinchcliffe, Josef Newgarden, Conor Daly and other IndyCar drivers going into the stands at TMS to sign autographs during the rain delay. Kudos to whoever thought of the idea.

I’m not sure how much mileage the series got out of the move. However, for a sport desperate for coverage outside its diehard base, the series’ stars making such a gesture to their paying customers provides a stark contrast to the perceptions many have of modern athletes. And it is certainly something the series can and should call attention to.

Not to pile on, but in what is now YEAR 11 for the third-generation driver from Nazareth, PA things are not showing any signs of getting better.

Between Jack Hawksworth and Takuma Sato in 2016, A.J. Foyt Racing has one top-5 finish and three top-10s all courtesy of Sato. A year and a half into the two-car expanded ABC Supply sponsored effort, these results cannot be sitting well with the only true two-car sponsor left in IndyCar.

Typically, starting 17th and finishing 9th is big headline stuff. And given his personality, and the fact fellow rookies Alexander Rossi and Conor Daly have garnered many of the headlines (deservedly), he’s gone somewhat overlooked.

However, the ninth-place finish Sunday was a career best for 2015 Indy Lights Presented by Cooper Tires champion Spencer Pigot. Pigot avoided the penalties that befell many around him and towards the end of the race found himself mixing it up with guys named Montoya and Newgarden (what a weekend he had by the way).

Keep in mind, Pigot won FOUR Mazda scholarships coming up the ladder. He’s the right combination of fast and clean behind the wheel and has won at EVERY step of the ladder along the way. And when he figures out an Indy Car he’s going to be dangerous.

The mention of Pigot brings me to another subject that is often discussed in IndyCar: American drivers.

The thought of course is that the series needs more Americans – in particular, race winning Americans – to grow and expand its fan base. While no one is mistaking Rossi, Daly, Pigot, Newgarden, Rahal et al at the moment for Foyt, Andretti, the Unsers, Rutherford and Johncock, IndyCar does have as talented a core of solid sub-30 American drivers as we’ve seen in quite a while.

Allow me to reiterate that it was an excellent weekend at Road America. Let me also say that I have in this space on numerous occasions called attention to a track staff being particularly helpful, or a sponsor rep going the extra mile. Although I know you come here to read about racing, the fact so many AR1 readers have a vested interest in the sport of racing, I find it part of my job to point out those whose behind the scenes efforts bring maximum value to the companies who support the racing industry. For example, last year on this exact weekend, I had the pleasure of visiting Sonoma Raceway for the NASCAR race, and called attention to the very professional and friendly track staff there. Companies such as Verizon, Honda and Chevrolet have representatives that regularly paint their organizations in a positive every weekend at the racetrack.

Again, reiterating that it was an excellent weekend at Road America, and that the positive from the weekend outweighed the negative by a factor of 100, courtesy, professional and friendly would not be accurate words to describe the track staff at Road America. And I’ll leave it at that.