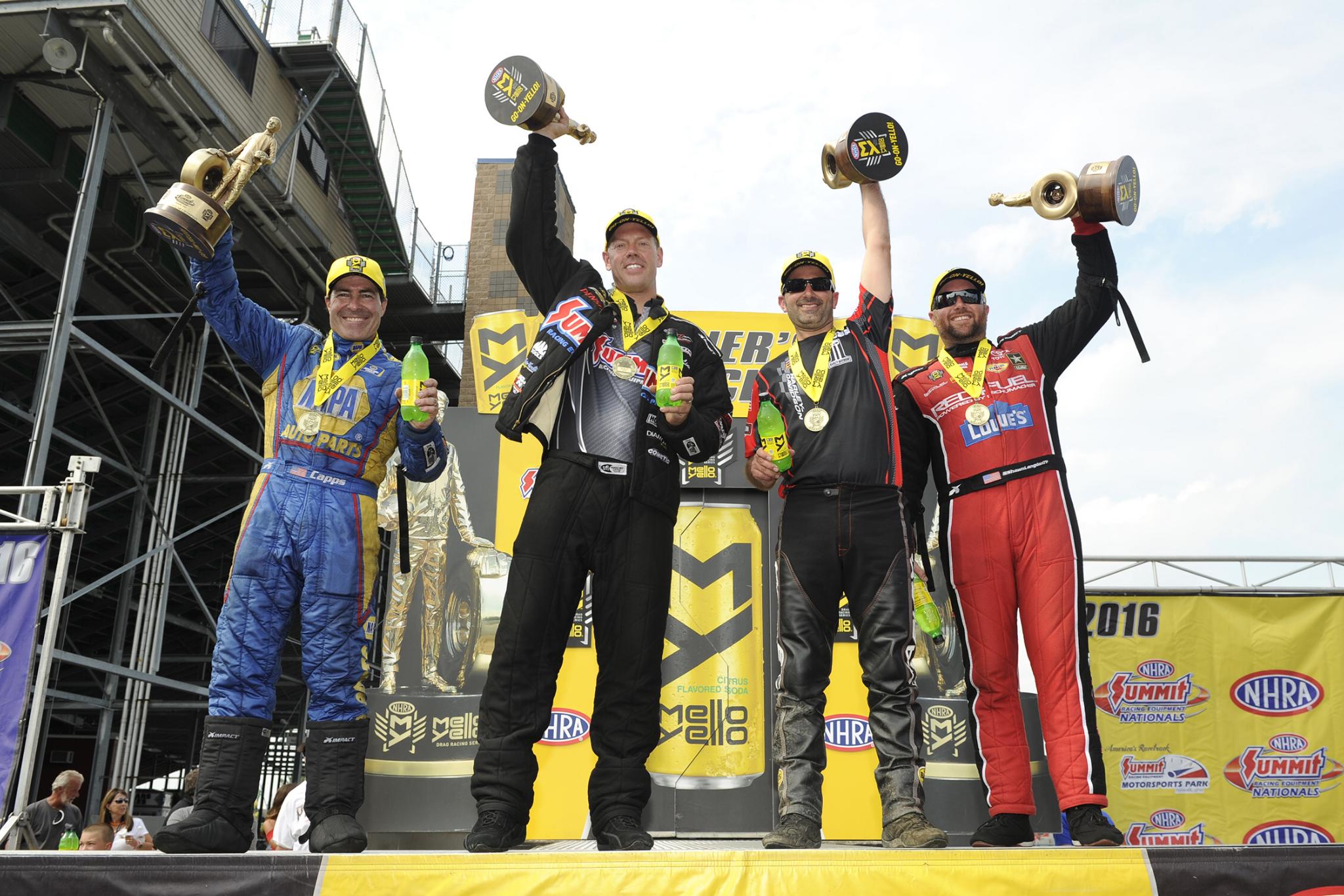 Capps raced his NAPA Auto Parts Dodge Charger R/T to a winning pass of 3.956 seconds at 317.49 mph to the losing run of Courtney Force at 4.010 at 314.17. This is his third win in four races, he has a commanding 130 point lead over Force who is second and credits his Don Schumacher Racing team for the success.

"What Rahn Tobler (crew chief) is doing right now is hard work," Capps said. "This guy has been working his tail off. It is big picture to him, he is not just a good crew chief, he is a good racer and I love that. When he is pointing at me in the windshield before a run, it gives me all the confidence in the world."

With the win, the 49th of his career, he ties legendary racer Don Prudhomme for 11th on the all-time NHRA win list. Capps is a former driver of ‘The Snake' and continues to admire the pioneer of the sport.

"He was my hero growing up," Capps continued. "These wins happen and you are told you have tied someone you are completely enamored with growing up, so when you are mentioned like that it blows me away. It doesn't seem possible, to be mentioned with someone like Snake is crazy."

Langdon, a DSR teammate to Capps, piloted his Red Fuel dragster to his second consecutive win of the year when he bested J.R. Todd in the final. His winning run of 3.846 at 319.75 to the losing effort of Todd at 3.937 at 285.05 earned Langdon his 13th career Top Fuel victory. Langdon defeated Troy Buff, Antron Brown, Brittany Force as well as Todd for the win. Langdon had fortune on his side in the first round when Buff red-lighted giving Langdon the automatic win while his dragster lost traction early in the run.

"I think we are starting to see a little luck go our way, we really should have been out first round," Langdon stated. "We were just fortunate Troy Buff redlit and we went back and looked at everything and couldn't find out why it did what it did. We went back to what we did in qualifying on Saturday with a hot weather tune up. We were able to put together three good straight runs and felt like we had a very strong car today."

In Pro Stock, Line faced his teammate and No. 1 qualifier Greg Anderson in the final. Line, in his Summit Racing Chevy Camaro, had the early advantage off the starting line and held off Anderson for his seventh win of the season. Line had a winning pass of 6.678 at 208.42 to Anderson's trailing run of 6.717 at 208.36. Line defeated Curt Steinbach, Erica Enders-Stevens, and Vincent Nobile en route to his final round match up with Anderson.

"It was a hard today, it was very hot out there," said Line. "We didn't run as well as we would have liked today and there were cars that were very close to us. They are getting closer and to win at the Summit race, in a Summit Car, at a Summit track is a huge deal. Greg and I have been very fortunate to make that happen a bunch of times, it's fun."

Pro Stock Motorcycle racer Krawiec, won his third race of 2016 when he defeated his Screamin' Eagle Vance & Hines Harley-Davidson teammate Andrew Hines in the final. Krawiec, who was also the No. 1 qualifier, had the winning run of 6.926 at 194.72 to defeat Hines who covered the distance at 6.937 at 193.29. His path to the win was eventful as he went off the end of the track into the sand trap following both his semifinal and final runs.

"We went back to the pit and had to take out 30 pounds of pea gravel," said Krawiec. "We put new brake pads on it, checked the fluid, drained everything and made sure it was 100 percent. We stopped fine in the lanes and everything. I see my fourth round win light against my teammate and went ‘not again'. I pulled the clutch in and went in for a ride."

The NHRA Mello Yello Drag Racing will resume July 7-10 with the Route 66 NHRA Nationals at Route 66 Raceway, in Joliet, Ill.