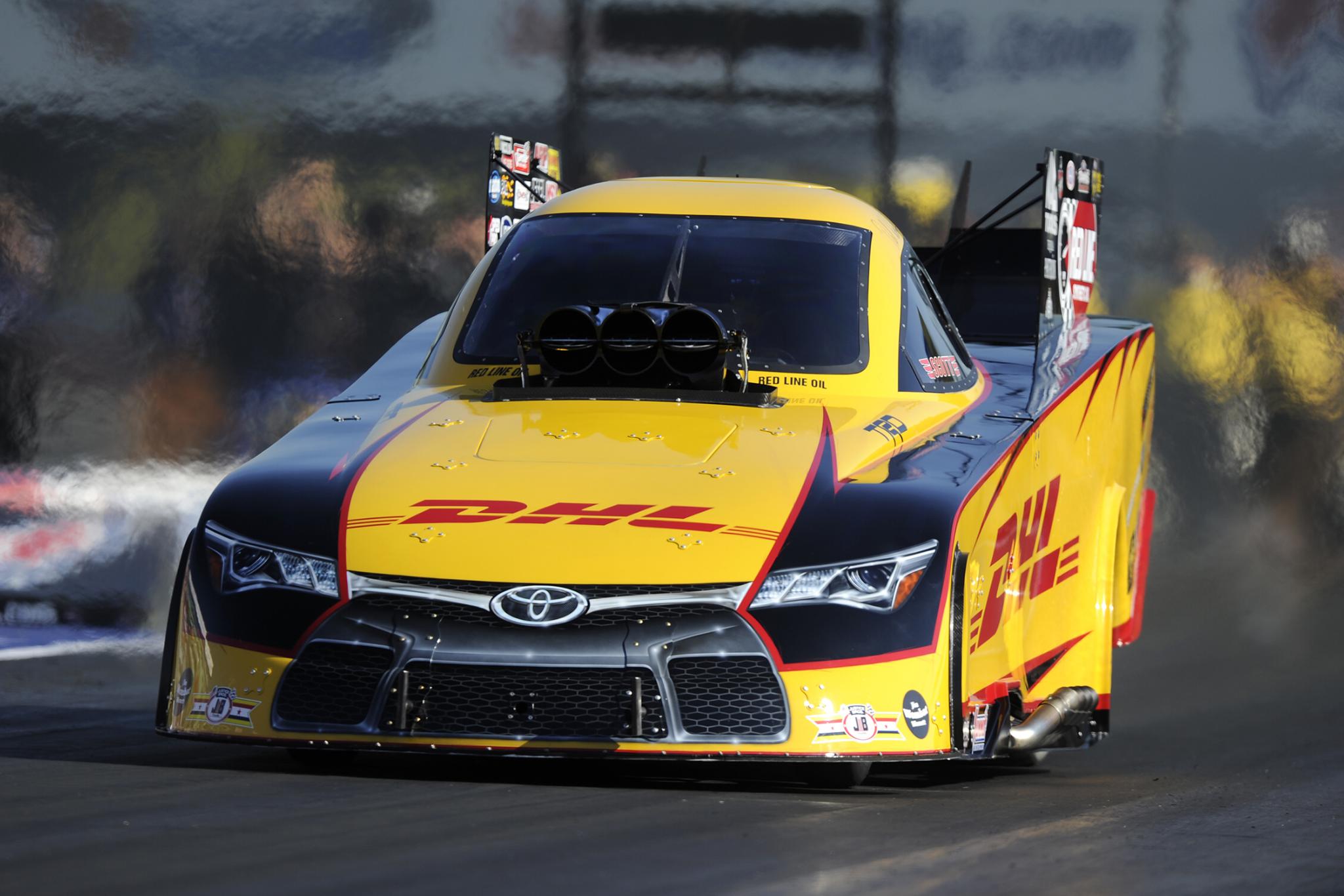 Kalitta Motorsports drivers Doug Kalitta (Top Fuel) and Del Worsham (Funny Car) swept the No. 1 qualifying positions in the nitro categories at their home track of Summit Racing Equipment Motorsports Park in Norwalk, Ohio. This is the third time the team based in nearby Ypsilanti, Mich., has swept both categories.

For Worsham, this is the first No. 1 qualifying position of the season and the 46th of his 540 race career. His elapsed time track record run of 3.875 seconds at 328.70 mph in his DHL Toyota Camry from Friday earned him the top position. Worsham's Camry suffered minor damage when the parachutes failed to deploy in the final qualifying session and he went through the sand trap at the end of the track.

"The car made a great run but we came in with a new Toyota DHL Camry body on our car," Worsham said. "We had a malfunction in the routing of the wiring of the cables from the levers to the parachutes and they failed. I swatted for them twice and when they didn't deploy it was all I could do to get it stopped. Luckily the damage was minimal for what it could have been."

"It will be interesting for tomorrow as it will get a little warmer so we will work that into our program," Kalitta said. "Getting into the top half is real important and that is our goal every time, to get lane choice. Just real proud of my guys on this thing."

Also in Top Fuel Antron Brown retained his No. 2 qualifying position and will face Luigi Novelli in the first round. Brittany Force will face Chris Karamesines as she aims for her third win of the season and Richie Crampton looks to improve on his season when he will battle Leah Pritchett.

"We are having a ball right now, having fun racing," Anderson said. "I love every individual race we come to, I love to have a chance to win each race we come to. It means more to me than anything to hoist that Wally on a Sunday at any racetrack we go to."

During qualifying at the 12th race of the season Anderson, who is second in the points, and teammate Jason Line, who is first, became the first racers to secure their berths into the NHRA Mello Yello Drag Racing Series Countdown to the Championship.

"I didn't think it could be done this early, job number-one is done, we are in the big show," said Anderson, a four-time Pro Stock world champion. "The good news is we can try a few things and experiment, we can test a few thigs some of the other teams can't."

[adinserter name="GOOGLE AD"] Pro Stock Motorcycle points leader Krawiec, on his Vance & Hines Screamin' Eagle Harley-Davidson, secured his fourth No. 1 qualifying position in the first five races of the season with his run of 6.822 at 195.31 that he posted during the second round of qualifying on Friday evening. This is his 31st No. 1 qualifying position of his career, third at the event that he won in 2011. He will face Chip Ellis on Sunday.

"I think I have a very good bike going into tomorrow," said Krawiec. "The biggest thing I have been struggling with here is, myself and my teammate, is just keeping up on the wind direction. It has been changing and for our motorcycles we really need to be on top of that, to make the proper chassis adjustments to go straight down the track. The knowledge and the data we have from today is going to help us tomorrow."

Eliminations begin for the Summit Racing Equipment NHRA Nationals on Sunday at 11 a.m.