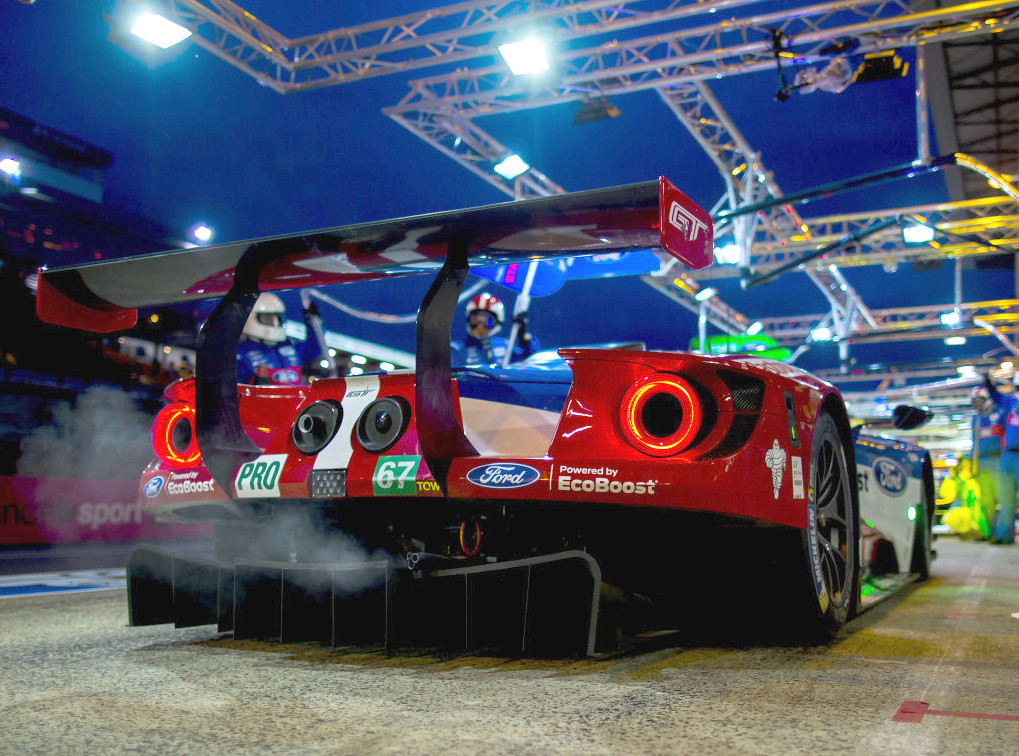 DAYTONA BEACH, Fla. – With close to 50 IMSA regular and semi-regular drivers entered in the 81st running of the 24 Hours of Le Mans endurance race, you'd expect qualifying performances to extend all through the field, and you'd be correct.

The brightest spot, though: One of the new Chip Ganassi Racing Ford GTs is on the pole for the hotly contested GTE Pro class, which is equivalent to the GT Le Mans class in IMSA's WeatherTech SportsCar Championship. In fact, the four Ford GTs are first and second, and fourth and fifth, split only by an AF Corse Ferrari in third.

The two fastest Ford GTs are both from the U.S. IMSA stable, while the other two are based in Europe. Dirk MÃ¼ller qualified the No. 68 Ford GT on the class pole with a time of three minutes, 51.185 seconds, with the No. 69 qualifying 0.312 seconds back.

"I'm really proud of everybody," MÃ¼ller said. "Just being here is a big honor for all of us." Piloting the No. 68 Ford is Joey Hand, MÃ¼ller and Sébastien Bourdais, with Ryan Briscoe and Richard Westbrook – who gave the Ford GT its first victory in May's WeatherTech Championship race at Mazda Raceway Laguna Seca – being joined by IndyCar and Indy 500 champion Scott Dixon in the No. 69.

Ford sent four cars and a hand-picked driver lineup to try and repeat the Ford GT's victory in 1966, on its 50th anniversary, but bringing home a win at Le Mans won't be easy. The defending champion Corvette Racing C7.Rs qualified at the tail of the class – 13th and 14th – after the ACO, the sanctioning body for Le Mans, slowed the Corvettes down before qualifying by using smaller air restrictors.

In an unusual move, the Automobile Club de l'Ouest (ACO), which organizes the 24 Hours of Le Mans, has made "Balance of Performance" changes less than 24 hours before the race. The changes are designed to slow the Ford GTs and Ferrari 488s that qualified at the front of the GTE Pro field and speed up others in the field like the Corvettes, but that doesn't mean it will be easy for the C7.Rs, which have eight class wins at Le Mans.

"We've said for some time that this year's Le Mans would be the biggest challenge that Corvette Racing has faced in our 17 attempts here," said Doug Fehan, Corvette Racing program manager. "There has been nothing over the last two days that should lead anyone to think otherwise. Anything can happen at this race, and that's what we love about Le Mans. It should be a great battle, and we're looking forward to adding to our Le Mans legacy."

[adinserter name="GOOGLE AD"]The No. 63 Corvette is driven by regulars Jan Magnussen and Antonio GarcÃ­a, with Oliver Gavin and Tommy Milner—last year's 24 Hours of Le Mans GTE Pro winners and 2016 GTLM winners in the Rolex 24 At Daytona and Mobil 1 Twelve Hours of Sebring – in the No. 64. Helping out are brothers Jordan Taylor (No. 64) and Ricky Taylor (No. 63), fresh from their Prototype victory in the most recent WeatherTech Championship race at Belle Isle in Detroit, driving the No. 10 Wayne Taylor Racing Konica Minolta Corvette Daytona Prototype. Jordan Taylor also was part of the 2015 Le Mans winning lineup alongside Milner and Gavin.

Here's a quick look at where some other IMSA drivers and teams qualified:

Michael Shank Racing, winner at Mazda Raceway Laguna Seca, is fielding the same Honda-powered Ligier that the ESM team won Daytona and Sebring with for co-drivers John Pew, Ozz Negri and Laurens Vanthoor. Also in a Nissan-powered Ligier is Krohn Racing's Tracy Krohn, Nic Jonsson and, on loan from the No. 5 Action Express Corvette DP, JoÃ£o Barbosa. Shank Racing starts from fifth, and Krohn from 23rd.

The GT Daytona class winners at the most recent race at Belle Isle in Detroit, Ben Keating and Jeroen Bleekemolen, have traded their Dodge Viper for an LM P2 Nissan-powered ORECA, with Marc Goossens visiting from the No. 90 Corvette DP he shares with Dalziel. They'll start 20th.

In GTE Pro: The No. 91 Porsche Motorsport 911 RSR of Patrick Pilet, Nick Tandy and Kevin Estre, and the No. 92 sister car of Frédéric Makowiecki, Earl Bamber and JÃ¶rg Bergmeister, start 10th and eighth, respectively. Tandy and Bamber, of course, won Le Mans outright in 2015 in the Porsche 919 Hybrid.

[adinserter name="GOOGLE AD"]And in LM GTE Am: Current WeatherTech Championship GT Daytona class point co-leader Christina Nielsen is part of the No. 60 Formula Racing Ferrari 458 Italia team. She is joined in the class by 2015 WeatherTech Championship GT Daytona champs Bill Sweedler and Townsend Bell, who again are teaming with Jeff Segal to drive the No. 62 Scuderia Corsa Ferrari 458 Italia. No. 60 starts seventh, No. 62, ninth.

The WeatherTech-sponsored No. 89 Proton Competition Porsche 911 RSR with Cooper MacNeil and Leh Keen – regular co-drivers of the No. 22 WeatherTech Porsche 911 GT3 R – are being joined by frequent Continental Tire Challenge competitor Marc Miller, and they start 10th.

The 24 Hours of Le Mans starts at 9 a.m. ET on Saturday with live television coverage available on FOX Sports 1, FOX Sports 2 and the FOX Sports Go app. Radiolemans.com will have live audio coverage, as well.