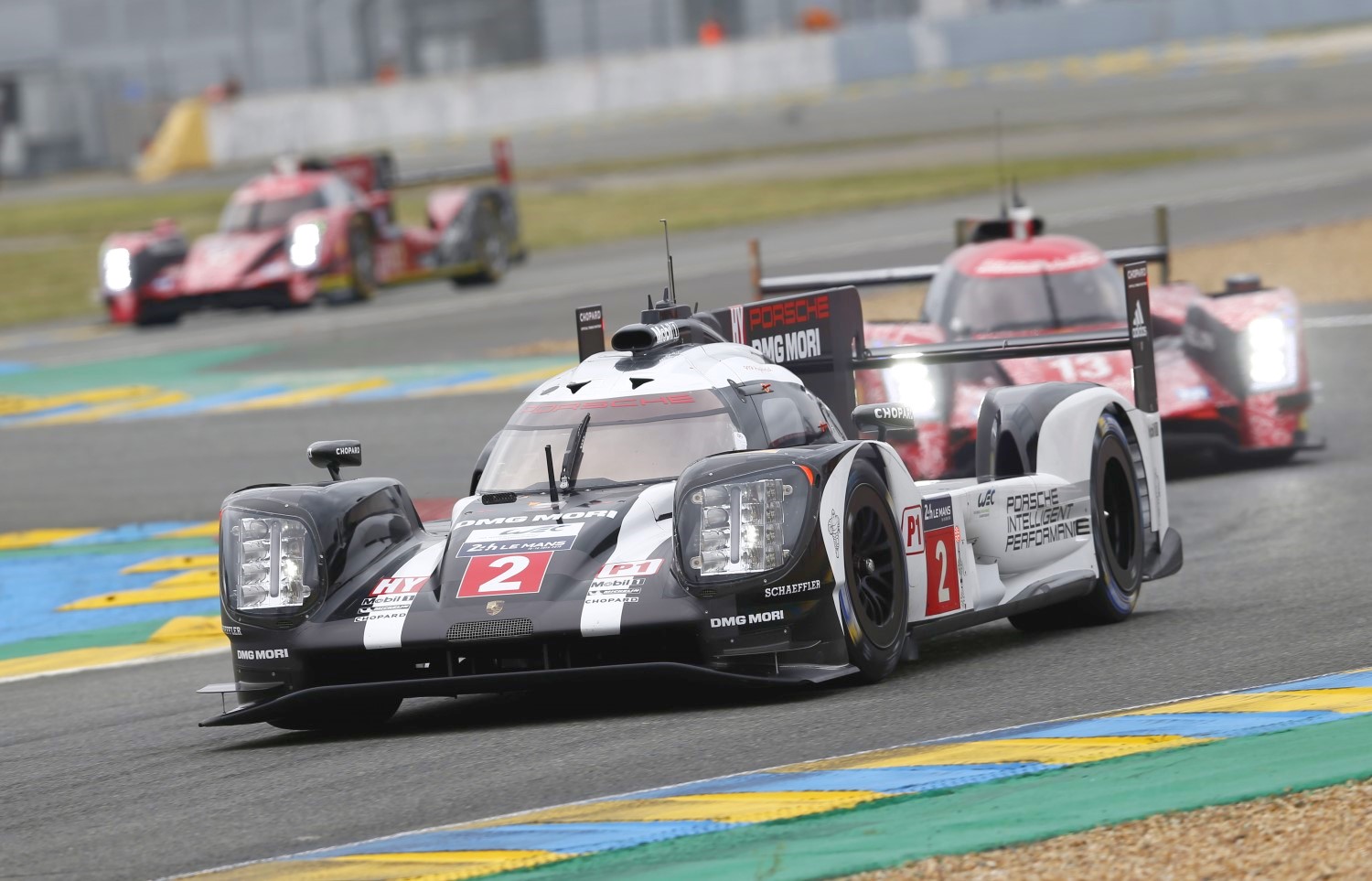 The Porsche 919 Hybrids dominated the first day's practice. No. 2 driven by Dumas-Jani-Lieb set the quickest time in 3m19.733sec in front of its sister car and the no. 6 Toyota TS050. In LM P2, the no. 26 Oreca 05 entered by G-Drive Racing was fastest, while in LM GTE Pro and LM GTE Am the no. 68 Ford and the Singapore team, Clearwater Racing's no. 61 Ferrari 458 Italia topped the time sheets.

The green flag was waved at 22:00 to unleash the cars for the first qualifying session. Five minutes later, the traffic was already very heavy as only ten cars were left in the pits. The Audi R18s accounted for two of the late starters, signaling a tough evening for the German marque.

Stephane Sarrazin in the #6 Toyota TS050 Hybrid was the first to record an excellent benchmark time of 03:20.737. After 12 minutes, Neel Jani (#2 Porsche 919 Hybrid) moved to the top of the standings in 03:19.733 despite being held up in traffic on the straight out of Karting Corner. After 32 minutes of the session, a red flag put paid to Mark Webber's plans to set a fast lap in the #1 Porsche 919 Hybrid. The session resumed at 22:43. Less than two minutes later, the #8 Audi R18 finally joined the track with Oliver Jarvis at the wheel. The car had been held up in the garage with front axle damage after Lucas Di Grassi hit a curb during free practice. As Jarvis set off, Di Grassi made a point of congratulating each of the mechanics for their work. The first full lap was completed in the eighth-fastest time of 03:31.934, considerably slower than the night's best.

It was a difficult session for Audi, which had to replace the MGU on the No. 8 car after striking a curb, while the No. 7 car suffered a small leak in a fuel connector. Both cars joined the session late due to these delays.

[adinserter name="GOOGLE AD"]There were more and more track incidents as time went on. Remi Striebig (Pegasus Racing Morgan) came off at Dunlop. At the same time, Ricky Taylor went straight on at Mulsanne with the #63 Corvette C7.R. A slow zone was called to avoid a red flag. However, drivers have no hope of bettering their lap times with a speed limit on part of the circuit.

It seemed that each time the track was clear, another incident occurred to hamper overall performance.

Emmanuel Collard in the #83 Ferrari 458 Italia held the lead in LM GTE Am for a while with 03:57.742. He was knocked off his perch by the #55 Ferrari AF Corse, who was then bettered by Rob Bell in the gorgeous #61 Ferrari 458 Italia fielded by Clearwater Racing. Finally, the #98 Aston Martin slipped between the leading Ferraris. The Vantage V8s had been rather discreet until that point.

Several cars had minor offs during the two-hour session, however, the only stoppage was to recover Fisichella’s Ferrari, one of several beneficiaries of the newly re-profiled Porsche Curves’ additional run-off.

Two additional qualifying sessions are scheduled for tomorrow evening, although thunderstorms, which are in the forecast, may result in this evening’s times setting the grid for the race.

Quotes after first qualifying:
Fritz Enzinger, Vice President LMP1: "As the weather conditions for tomorrow don't look stable, P1 and P2 in the first qualifying session could become important. We have completed an entirely errorless day. Both our Porsche 919 Hybrids ran into traffic on their respective fastest laps, which means both cars have the potential to go faster. We are very much looking forward to the second and third qualifying sessions on Thursday."

Andreas Seidl, Team Principal: "This was a successful start into the race week for us. All our drivers have completed their mandatory night laps. Both cars ran without technical problems and we have completed our program as far as the changing weather conditions and the incidents on track allowed. We have found answers to all open questions we had. Of course, we are pleased to be in front with both cars after the first qualifying. Neel and Timo were super-fast and didn't take any avoidable risks, although they were held up in traffic. The entire team did a highly focused job today and we can just hope the week continues like this."

Drivers Porsche 919 Hybrid car number 1:
Timo Bernhard (35, Germany):
(9 races: overall victory 2010, overall second 2015, class victory GT 2002)
"Qualifying was quite exciting. I had two attempts at a pole lap, each one looked very promising – but every time I met two slower cars in the Porsche Curves, which cost me a lot of time. Until then I was quite satisfied. But getting a clear lap here is always a kind of lottery. In any case we learned a lot for the race, and this is important too."

Brendon Hartley (26, New Zealand):
(4 races: overall second 2015)
"Timo did a mega job to start with. He did two best sector times and definitely was on the way to do a top time, but then he was very unfortunate with traffic several times in the last sector. But that's the story here in qualifying with 60 cars on the track and we have two more sessions tomorrow. It was good to familiarize myself with this unique track in the dark again. Everything is running smoothly, and P1 and P2 is a great team effort for today."

[adinserter name="GOOGLE AD"]Mark Webber (39, Australia):
(4 participations: overall second in 2015, not racing in 1998 and 1999)
"We got through most things we wanted to, which was good. There is just one more day of qualifying to go before we get to the real stuff. I think we have done enough practice now, so we are looking forward to the race more and more. The boat is about to leave the jetty."

Neel Jani (32, Switzerland):
(7 races: qualifying record lap and 5th place overall 2015)
"It was really difficult to get a clear lap in tonight's qualifying. There was a lot of traffic and quite a number of cars drove extremely slowly. I believe no one managed a real good lap today. For the time being we were good enough to take provisional pole position, but there is a lot more possible. We are very happy with our car."

Marc Lieb (35, Germany):
(10 races: 5th place overall 2015, class victories GTE 2013, GT2 2010, GT 2005)
"During my second attempt there were significantly less slow zones around the track than during my first one, and the general driving was much better, despite a lot of traffic. We definitely made a step forward today and the first qualifying session was quite a success. Now we have to wait for the warmer track during the daytime to see how we perform in these conditions. Since there are still two qualifying sessions ahead of us, we must not take the times as final."