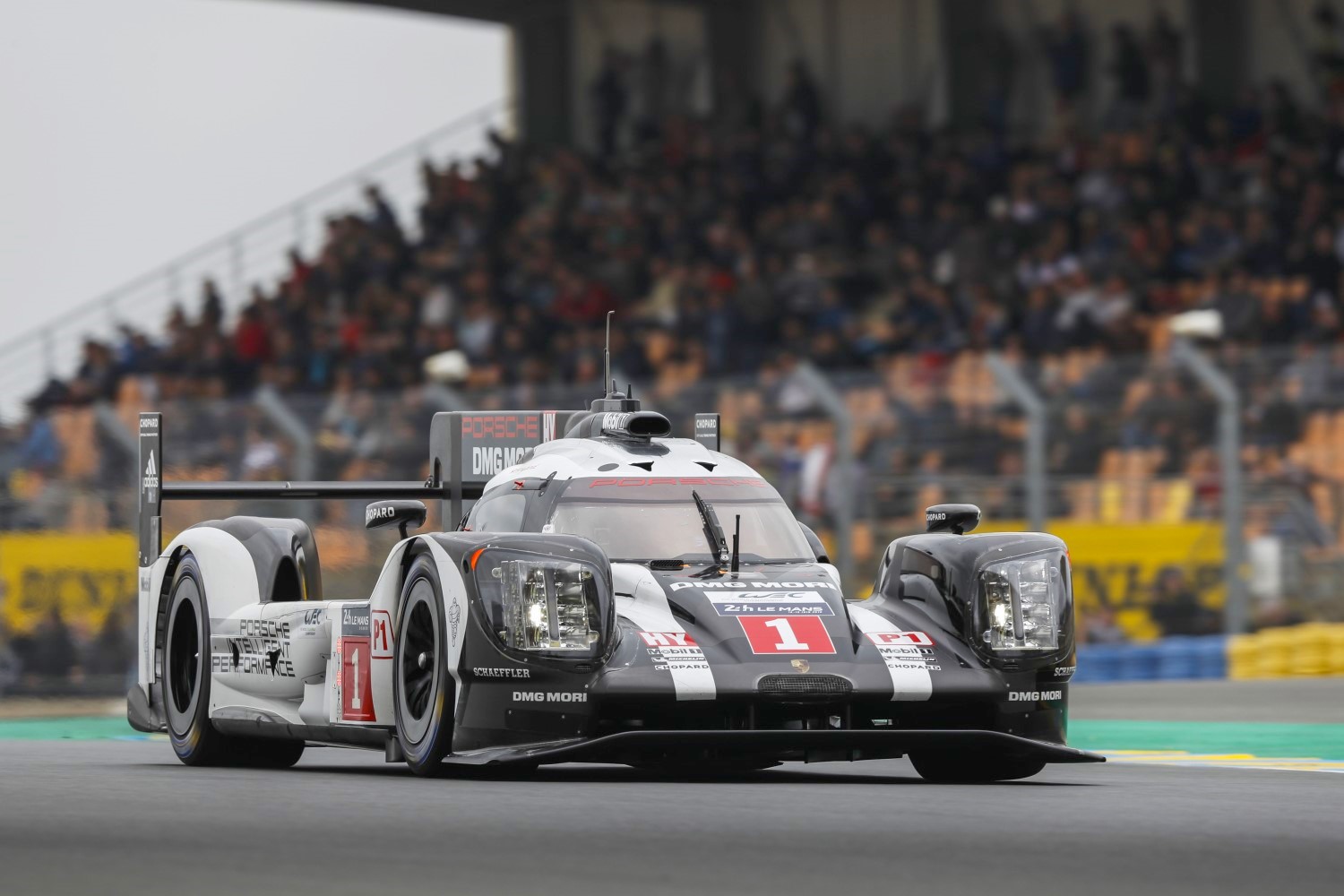 Public expectations are high ahead of the Le Mans 24-Hour on June 18 and 19. Le Mans is also the third round of the FIA World Endurance Championship (WEC). Ahead of the season’s highlight, the trio of Romain Dumas (FR), Neel Jani (CH) and Marc Lieb (DE) leads the drivers’ standings. The reigning world champions in the sister car, Timo Bernhard (DE), Brendon Hartley (NZ) and Mark Webber (AU), have been unlucky in the first two rounds (accident in Silverstone, puncture in Spa-Francorchamps) and can’t wait to catch up. At the classic on La Sarthe, the teams and drivers are rewarded with double points compared to the other eight six-hour races in the championship.

For Porsche it is the third entry in Le Mans after returning to top level motorsport. In 2015, at only the second try, Porsche managed a one-two result. The 919, with its ground-breaking downsizing two-liter V4 turbocharged petrol engine and its two energy recovery systems (brake and exhaust energy), has been significantly developed. It produces a system power of 662 kW and hits the Le Mans roads with an aerodynamic configuration for low drag. On the long straights the 919 frequently reaches top speeds above 320 km/h.

The Porsche drivers in the LMP1 class

The six works drivers have between them participated in the Le Mans race a total of 49 times. Bernhard/Hartley/Webber finished second last year and now drive the futuristic prototype with the number 1. Dumas/Jani/Lieb came fifth in 2015 and share the number 2 Porsche 919 Hybrid. Last year’s winning car was in the hands of Earl Bamber (NZ), Nico HÃ¼lkenberg (DE) and Nick Tandy (GB).

As the most successful manufacturer in the history of the prestigious long distance classic, Porsche is again represented by a large contingent. In the strongly supported GT classes, a total of seven 911 RSR tackle the world’s toughest automobile race: The Porsche Motorsport factory squad fields two 911 RSR with the overall Le Mans winners Earl Bamber (New Zealand) and Nick Tandy (Great Britain) and with five nine-eleven contenders campaigned by customer teams. With the two 919 Hybrid in the LMP1 class, Porsche is represented at Le Mans by total of nine vehicles and 16 works drivers.

As the fastest ever nine-eleven, the Porsche 911 RSR crowned its maiden 2013 season with a double victory at Le Mans. The racer is based on the seventh generation of the iconic 911 sports car at Porsche Motorsport in Weissach and in addition to Le Mans it also won the American long distance classics at Daytona, Sebring and the Petit Le Mans. The winning racer, which is characterized by an uncompromising lightweight design, received modifications for 2016, particularly to the aerodynamics. The position of the rear wing was moved further to the back, with the rear diffuser now considerably larger. Moreover, the 911 RSR received a modified front spoiler lip as well as wide side sills.

The Porsche drivers in the GT classes

[adinserter name="GOOGLE AD"]Six Porsche works drivers contest the GTE-Pro class at Le Mans for the Porsche Motorsport factory squad. Sharing the cockpit of the #91 Porsche 911 RSR are Nick Tandy and reigning IMSA GT champion Patrick Pilet (France) with Kevin Estre (France). The sister 911 RSR with the starting number 92 has an equally strong line-up. Earl Bamber shares driving duties with JÃ¶rg Bergmeister (Germany) and Frederic Makowiecki (France). With 14 starts until now, JÃ¶rg Bergmeister has the most experience as a Porsche GT pilot at Le Mans. Taking up the race in the 911 RSR run by the Dempsey Proton Racing customer team is Richard Lietz (Austria), the WEC winner of the FIA World Endurance Trophy in 2015 as the best GT pilot, and his works driver colleague Michael Christensen (Denmark), with whom he contests the entire WEC season. Supporting them as the third driver is Philipp Eng (Austria), the 2015 winner of both the Porsche Mobil 1 Supercup and the Porsche Carrera Cup Deutschland. This will be Eng’s cameo appearance at Le Mans, where traditionally double points are awarded towards the WEC championship. In the GTE-Am class, four other customer teams and two Porsche works drivers race the Porsche 911 RSR: Abu Dhabi Proton Racing with Patrick Long (USA) and KCMG with Wolf Henzler (Germany), as well as Gulf Racing and Proton Competition.

The 24 Hours of Le Mans is legendary. In the list of winners, the best racing drivers in the world have been immortalized. Even Hollywood has honored the prestigious long distance race in the French province: The 1970 film “Le Mans" featuring Steve McQueen in the lead role is regarded as one of the best racing movies of all time. The race, run for the first time in 1923, is not only famous around the world for the 13.629-kilometre Circuit des 24 Heures with its combination of racetrack and normal national roads as well as its legendary corners like Mulsanne and Tertre Rouge. The almost five-kilometer-long Mulsanne straight also sets this racetrack apart.

Quotes before the race

Fritz Enzinger, Vice President LMP1: “Coming back to Le Mans for the pre-test was emotional for the entire team. Winning in Le Mans doesn’t compare to anything else, because it is so incredibly hard. The fact we made it in 2015, in only our second attempt, puts us in the role of an odds-on favorite. We have to make sure this doesn’t drive us crazy. By no means is 2016 going to become any easier, as the opposite is the case. Porsche set new technology benchmarks when returning to the top category with the most advanced prototype on the grid. The competition has reacted and that’s why we now all have a 24-hour race ahead of us which might become the closest in history."

Andreas Seidl, Team Principal: “The race team and the staff back in Weissach did a super job in development, as well as during testing and preparation. Le Mans especially is a steep learning curve. In 2014 the race came much too early for our freshly assembled team. Still we got further than anyone could have expected and then learnt how bitter a retirement shortly before the finish can taste. In 2015 we managed three cars, got them one-two-three on the grid, brought them all home and celebrated a one-two result. Le Mans 2016 is our 19th race as a team. This isn’t a lot. Technically and operationally we are better prepared than ever. But we know about the challenge to survive the race week, and especially the race itself, with no technical problems and no incidents on track. We have the utmost respect for that. We feel ready."

Dr Frank-Steffen Walliser, Head of Porsche Motorsport: “Porsche and Le Mans have written many decades of motor racing history together. This tradition brings an obligation. As the most successful manufacturer in the history of this fascinating long distance classic, we are back again this year with a large contingent. We’re campaigning no less than seven 911 RSR against very strong opposition in the traditionally very competitive GT classes. The competition in the GTE-Pro class in particular has seldom been this high: Five well-known manufacturers and 14 vehicles manned with top pilots – you only get this at Le Mans."

Marco Ujhasi, Overall Project Manager GT Works Motorsport: “Preparing for Le Mans has always been intense. We’ve used the time well to find the best possible setup for our 911 RSR for the special demands of this extraordinary race. The main focus for Le Mans is to drive for as long as possible at the highest level and to keep out of any tangles, so that you still have an undamaged car to really attack in the final sprint. We’ve laid the foundations for this and we hope that we can ultimately fight for victory."

Facts and figures
The schedule

The technical inspection of the 60 racing cars, which are subdivided into four classes, begins on the Sunday before the race, June 12, at the Place de la République. It is a public event in the middle of the city. The scrutineers examine the cars, and the 180 drivers must present their paperwork. The Porsche LMP1 team is scheduled for this inspection on Sunday from 2:20 pm onwards. The last teams will complete this technical part of the administration by Monday evening.