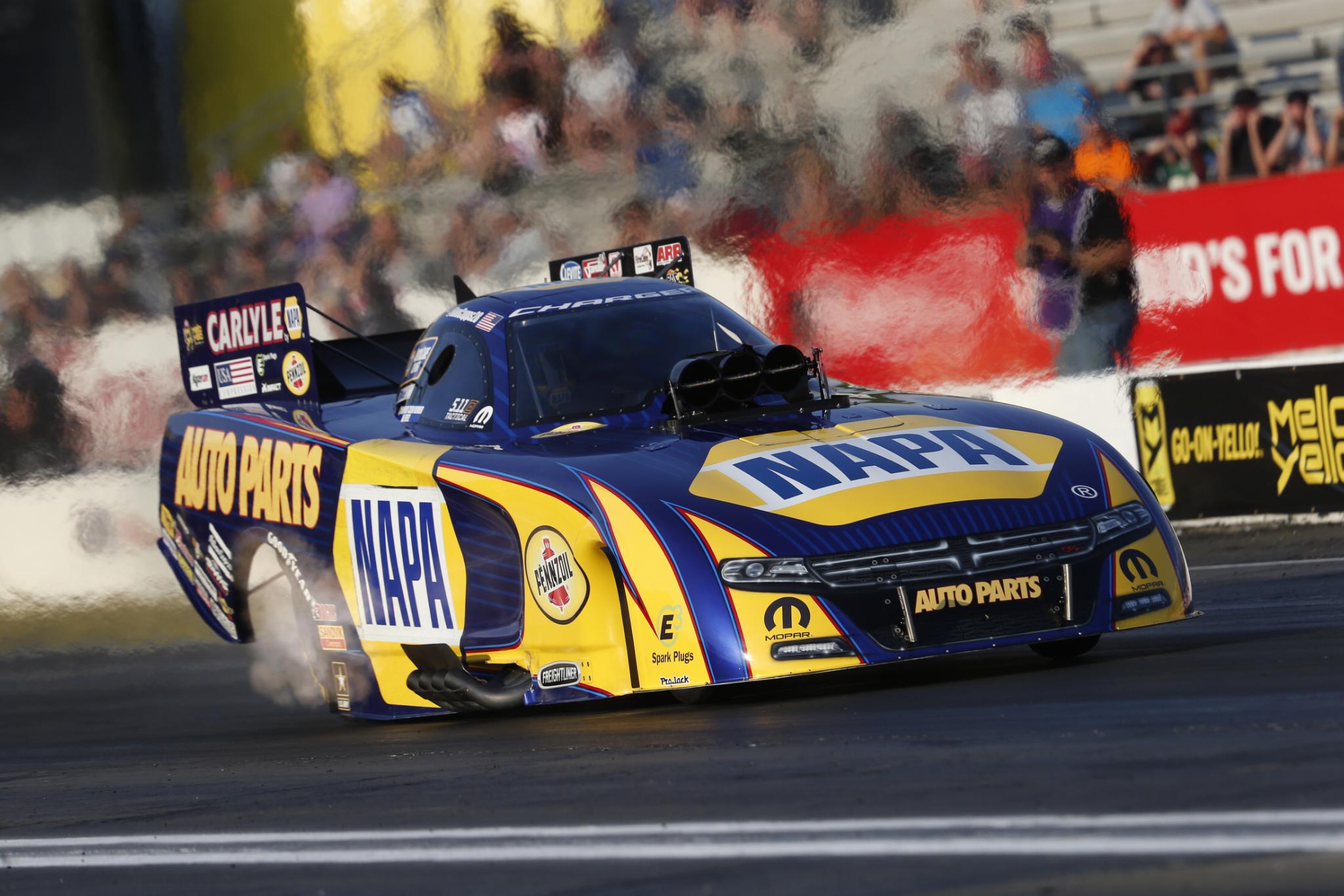 Steve Torrence claimed his fifth No. 1 qualifier of the season in Top Fuel on Saturday at the NHRA Summernationals at Old Bridge Township Raceway Park.

Torrence, who won the season opener in Pomona, Calif., piloted his Capco Contractors/ Torrence Racing dragster to a 3.735-second pass at 325.06 mph on Friday to propel him into eliminations as the top qualifier. Torrence, who won in Englishtown in 2012, will line up against Smax Smith in the first round of eliminations Sunday morning.

[adinserter name="GOOGLE AD"] "I had no expectations of the car coming out this year and running as well as it has," said Torrence, who posted a runner-up finish last weekend in Epping, N.H. "I had five No. 1 qualifiers coming into this season and we've had five in this season already. So far it's been a storybook season and we're just going to try and maintain that consistency."

Fan favorite and 2015 Summernationals winner Antron Brown qualified second with a 3.742 at 317.94 in his Matco Tools dragster. Brown, the two-time and defending Top Fuel world champion from Chesterfield, N.J., will face Terry Haddock in round one. Shawn Langdon and his Red Fuel / Sandvik Coromant dragster qualified third and will face Shawn Reed. Brittany Force and her Monster Energy dragster are fourth and will race Luigi Novelli while points leader Doug Kalitta is fifth and will face off against Leah Pritchett Sunday morning.

Capps' elapsed time track record of 3.870 at 318.62 in his NAPA Auto Parts Dodge Charger R/T from the first round of qualifying on Friday earned him his third No. 1 qualifier of the season and 20th of his career. He has posted 12 consecutive three-second runs in his Dodge Charger R/T. Capps, who won last week in Epping, N.H., will face John Hale to open eliminations.

"It feels good," said Capps, who was also the No. 1 qualifier in Epping last week. "It's been great and I love the horse I get to ride right now. It's fun but I've been around long enough doing this that you don't try to expect anything or get too confident or cocky so we'll just keep going a little bit at a time."

Matt Hagan remains in the second spot in his Mopar Express Lane / Rocky Boots Dodge Charger R/T with a 3.901 at a track record speed of 326.71. Hagan, who won back-to-back races earlier this season, will face Jim Campbell in round one. In the third spot is Robert Hight in his Auto Club Chevrolet Camaro. Hight will race Jeff Diehl to start eliminations. Reigning world champion Del Worsham is fourth and Tommy Johnson Jr. is fifth.

Line powered to the quickest time of the year in Pro Stock and earned his fifth No. 1 qualifier of the season with a 6.519 at 212.56 in his Summit Racing Equipment Chevy Camaro. Line, a two-time world champion, will open Sunday's eliminations with a first-round bye.

"We definitely learned some things today and I think we'll have a good tune up for tomorrow," said Line, who has five wins in eight final round appearances so far this year. "I'm not going to trade with anybody else. My car is really good right now."

In the No. 2 and 3 spots are Line's Ken Black Racing teammates Greg Anderson and Bo Butner, respectively. Anderson and his Summit Racing Equipment Chevrolet Camaro will face Charlie Westcott in the first round and Butner with his Jim Butner Auto Chevy Camaro will matchup with John Gaydosh.

"Our goal coming into today was to learn," said Krawiec, who leads the points standings. "Hopefully we'll be able to use that data that we got today to go some rounds tomorrow; one run at a time and have fun doing it."

Louisiana alligator farmer Jerry Savoie qualified second with a 6.788 at 197.80 on his Savoie's Alligator Farm Suzuki. Savoie, who lost to Krawiec in the most recent Pro Stock Motorcycle event in Atlanta, will meet Cory Reed in the first round. In the third spot is Hector Arana Jr. and his Lucas Oil Racing Buell. Arana Jr. will be matched up against Jim Underdahl. Reigning world champion Andrew Hines is in the fourth spot and will open eliminations against Michael Phillips.