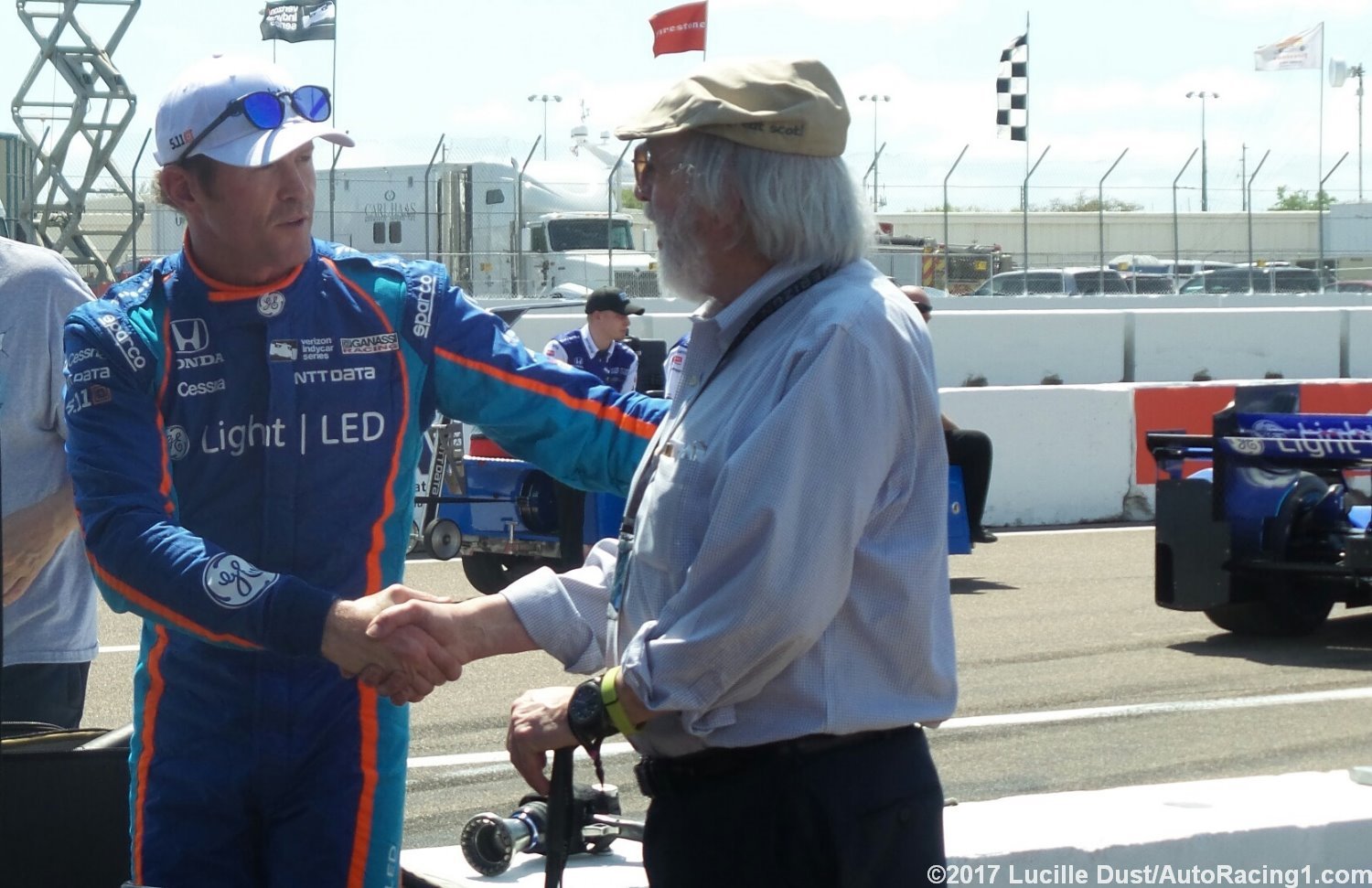 Wondering around the pits today was the former owner of Pac West Racing, Bruce McCaw. He owned the Champ Car team from 1994 to 2002 while running his cellular phone business. Scott Dixon drove for a PacWest Racing from 2001 -2002 and got the team their final victory at Nazareth.

McCaw was only visiting the pit lane to catch up with old friends. One of Forbes' America's Richest, McCaw is not interested in coming back into racing.

Oriol Servia is wandering around with an Indy 500 ride in his pocket but he really wants to do more races. Getting sponsor money is the key….as always.

We learned in our video interview with team owner Michael Andretti we learned that the new IndyCar bodykits coming out in 2018 will be free to the teams, at least the first set will be. After that they would have to be buying replacement body parts for accident damage anyway. But because the kits will be simpler, there will be less parts to replace.

At the end of the interview we tried to get Michael Andretti to tell us who his 5th Indy 500 driver will be. He would not say but if we had to guess, it will have Townsend Bell back. Townsend was in contention to win last year until his accident on pitlane with Ryan Hunter-Reay. He's fast at Indy and he usually is able to land sponsorship money for the 500. His father-in-law is Rod Campbell who was Chairman and CEO for Campbell & Co. for 16 years. Hence he knows how landing sponsorship works.

We have it on good word that Roger Penske said to someone at ABC or ESPN "can't we find a way to put all the races on ABC?" If true Penske is saying what we have been preaching for years, network TV can easily deliver over 1 million households per race broadcast and that is what you need to bring big sponsors into the series.

Brakes are the hot topic this weekend. With the new PFC brake pads the brake temperatures are going very high and not reaching a plateau. Hear what Michael Andretti says about this topic in this exclusive AR1.com interview

INDYCAR continues building momentum and solidifying its future by today announcing that manufacturers Chevrolet and Honda have signed multiyear contract extensions to supply engines for the Verizon IndyCar Series.

The announcement follows those earlier this year that chassis maker Dallara and tire supplier Firestone have also signed multiyear extensions, meaning all four major manufacturers have committed to the sport.

"This is a unique moment in the recent history of the Verizon IndyCar Series," said Jay Frye, INDYCAR president of competition and operations. "To have all of our major manufacturers locked in with us for the foreseeable future points to the fact that they all have bought into the vision for the Verizon IndyCar Series. It’s another sign of the positive momentum we continue to build as we grow this sport into the next decade."

The alignment of all four manufacturers for multiple years is a key component of INDYCAR’s five-year plan for the Verizon IndyCar Series that Frye unveiled in January. Under the plan, aerodynamic regulations were frozen this season for the kits produced by Chevrolet and Honda in preparation for a universal aero kit to be used by all cars in 2018.

In keeping with INDYCAR’s 2017 theme of "NEXT," confirming the two engine manufacturers for the future also lays the groundwork for attracting additional original equipment manufacturers (OEMs) to be the next to compete in the Verizon IndyCar Series.

But Houston, we have a problem. There is nothing in the manufacturer contract with IndyCar that prevents Honda and Chevy from signing 5-year deals with all the best teams. This would mean any new OEM will have no winning teams to sign with, hence they won't win, will look like losers, and hence will not come into the series.

We did hear some speculation that VW has had a look, but as we say, why will they come into the series if they will look like losers. Not only would they be coming in at a disadvantage with a new engine and no IndyCar experience, they will also be strapped with a bottom tier team – a double whammy.

"We have worked hard to harness the power of the paddock so we are all pulling together, and this is evidence of that," Frye said. "The fact both Honda and Chevrolet are encouraging INDYCAR to attract additional OEMs to compete is a sure sign that we are on the same page."

INDYCAR debuted initial renderings of the 2018 car look in January at the North American International Auto Show in Detroit. In addition to being more aesthetically pleasing to the eye, the car will have enhanced safety through the reduction of aero parts on the top of the car. Additional downforce will be created from underneath the car and less drag off the back of the car, creating even better on-track competition. More details about the car and its look will be unveiled in coming weeks, with the goal of having it ready to test on track this summer.

Each car receives seven sets of primary tires for the weekend. Each car also receives four sets of alternate (red-sidewall) tires one of which can be used in either session today, but must be returned at the end of the day.

On exiting the pits, cars can put left-side tires over the white line and but cars need to re-enter the track in Turn 2.

The pit speed limit is 50 mph. For practice sessions only, if a car is recorded at 50.01-55.00 mph, it will receive a warning from race control. If the car exceeds 55.00 mph, it will be given a drive-through penalty.