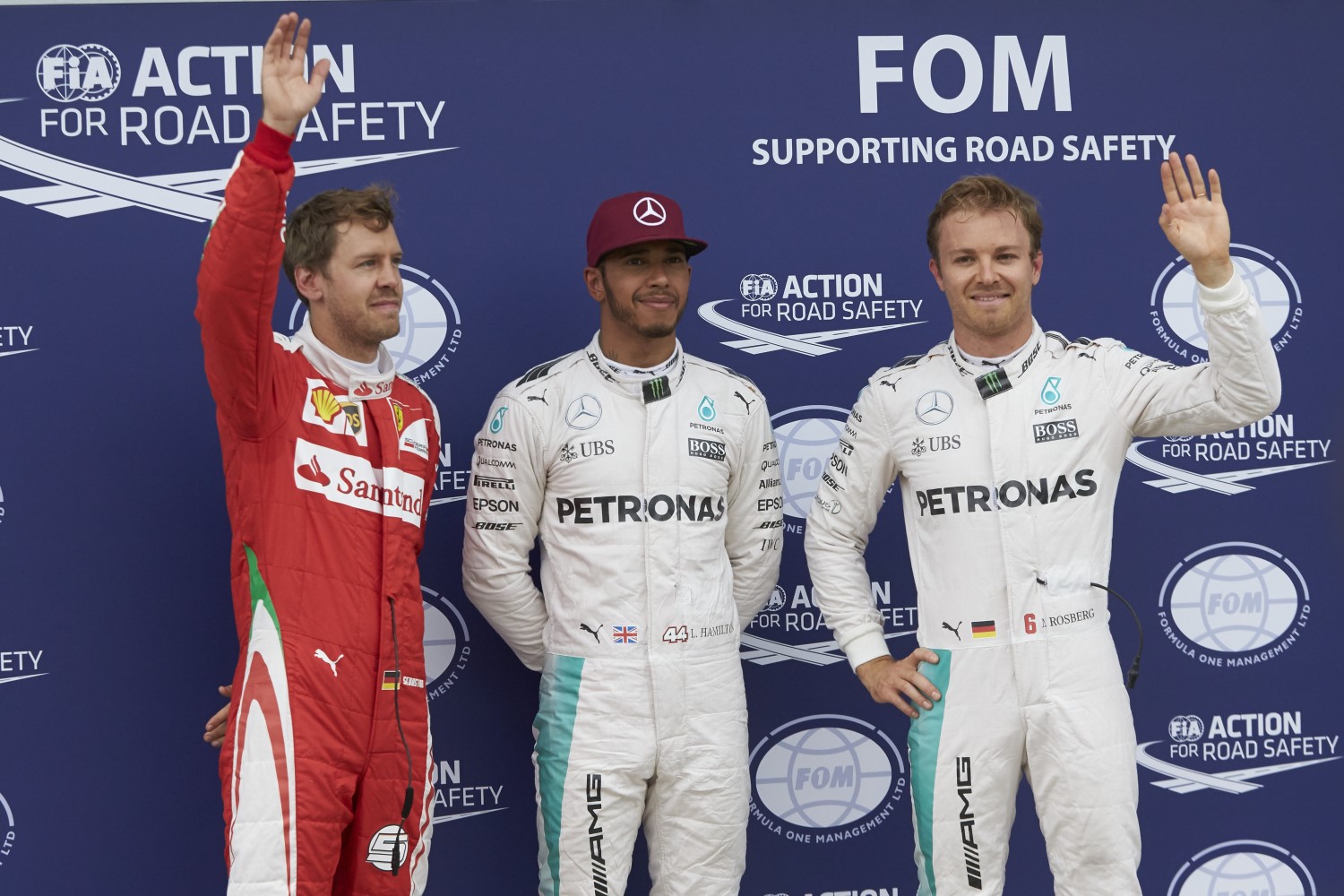 Q: Lewis, your fifth pole here in Montreal, obviously a track you love. Do you feel that you had that one under control throughout or was that margin of six one hundredths, I think was, a little too close for comfort?

Lewis HAMILTON: To be honest, it doesn't matter how far you are ahead, as long as you are ahead. But of course, in practice it was a much bigger gap than today. Today I just didn't have the pace that I had yesterday but clearly it was enough. There was definitely more time in it. But it was great to see how close we all were, I think that's great for the fans to see. An amazing turnout on a Saturday here today, as always, and I'm glad that it stayed dry. Going to be interesting tomorrow but it's the best place to start that's for sure.

Q: Thank you. Nico, coming to you, big lock up into Turn One on that final run, just six one hundredths of a second, though, behind Lewis on the first one. You were clearly right on the edge today?

Nico ROSBERG: I was hoping you hadn't seen that one, but apparently it did come out on TV! Yeah, first lap in Q3 was good. Not quite enough to beat Lewis but it was still a good lap. Next one I tried to pull one out of the bag but it didn't work out, so that's it, so second place. Still a good team result of course, again to show that we are the fastest, the fastest car, which has been great, even on this very unique track here. Yeah, for tomorrow everything is still possible, you know, the weather forecast is all over the place, and from second place it's all doable.

Q: Sebastian, only a tenth off the pole position Mercedes. Interesting reaction from you at the end though, apologizing over the radio in Italian 'scusami' to the team. Clearly you thought pole might be possible today.

[adinserter name="GOOGLE AD"]Sebastian VETTEL: I think going into qualifying I thought it was possible. As a driver you always feel that there's a little bit more. I think on my last lap I was very happy with the lap in general, I was maybe a bit greedy out of ten and maybe not greedy enough into turn six but yeah, there wasn't an awful lot to grab otherwise, as I said, very happy. I wanted to get below the 1m 13s mark because then I knew it would be very close with the Mercedes. I did that but just by one hundredth so yeah, a little bit was missing but overall I think we have a great car, we did a step so I'm happy with how the weekend has turned out. We did a step or so overnight so I felt in general very comfortable and enjoyed qualifying a lot. Brushed the Wall of Champions so done that, don't have to do that tomorrow so we should be all set.

Q: Back to Lewis, obviously the race tomorrow is one of your favorites, you've won it four times, three times from pole position but clear the challenge from Ferrari looks a little stronger this weekend.

Hamilton: Yeah, Ferrari have obviously picked up the pace with the upgrades they've got in their car. This is a great track to test the ultimate speed so we're excited to have the race with them. I think it should be exciting for the fans, I think their long runs look very strong. I don't know if they were stronger than ours but we shall see tomorrow.

Q: Lewis, clearly today was a day for the ultrasoft tires but getting them switched on – obviously people had different techniques for doing that. You did a 1m 21/22s bedding in lap. How hard was it, how big a challenge was it to get the tires working today in these changeable and quite cool conditions?

Hamilton: It was very similar to the last race, to be honest. The ultrasoft is not particularly soft for whatever reason, they're just such hard compounds; it takes us so long to get the temperature into them, so yeah, you need two laps to really bed the heat into the tread. But I think it was the same for everyone. Most people were generally in the same boat. You could push for the first lap but they were just not quite ready, so that's why people do the second one.

Q: Nico, I guess the way you could look at this if you were taking a glass half full approach is statistically it's the least important pole in terms of the race outcome of the season, so does that give you some optimism for the race tomorrow?

Rosberg: For now, I'm just thinking about now where I just missed out on pole, very close but for sure yeah, from second anything's possible, I know that and I will give it everything, but definitely the pole would have been better today, for sure. But I will still try and go for the win tomorrow.

Q: Sebastian, you referenced the updates, obviously you've got the new turbo here, tell us about the impact you think that's made for you in terms of qualifying and how it will enable you to maximize the potential of your power unit in your car tomorrow in the Grand Prix?

Vettel: It's secret! No, there's no big surprise. I think we expected to bring performance to the car and that's what it did. I think this is probably a track where it's quite important. There are a lot of straights so yeah, I think that's why we decided to bring it here as well and as I said, it worked and it should help us also tomorrow, not just today.

Q: (Peter Windsor – F1 Racing) Lewis, the lap looked pretty lively, the pole lap. I just wonder from your perspective if it was near perfection? We didn't see very corner, every aspect of it. Were there any areas of it where you could still have improved, do you think?

Hamilton: I think for all us there's always time to improve for sure, but honestly qualifying wasn't a great qualifying for me in terms of laps, they weren't particularly that great. Even my pole lap was definitely at the lower end of the good laps of pole laps that I've had so being as that's the fact, I'm pretty happy that I'm still on pole.