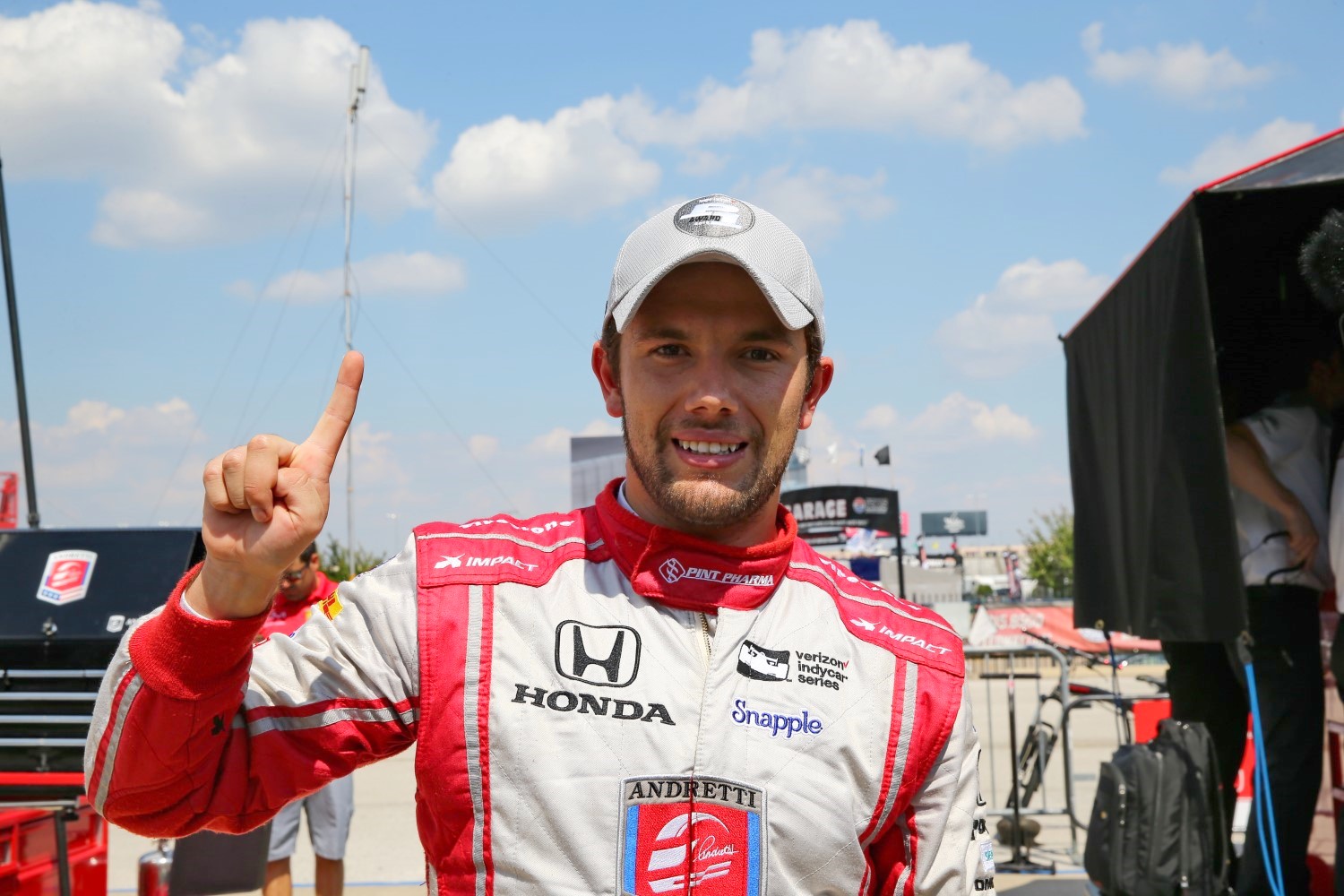 Scott, talk about your qualifying performance.

SCOTT DIXON: Yeah, it was really good. I think everybody on the team did a hell of a job. The car was surprisingly good to drive. In these situations you trim out a lot, so it's normally on the edge. If you miss by a little bit, it can be a bit of a handful. But the balance was really good.

I thought the rear was fighting a little bit, which cost us a bit of speed. Moved the weight jacker a couple of times, that was about it.

Yeah, it's nice to start up the front. I don't think it's really a big deal where you qualify, as long as you're sort of half field up towards the front.

But always it's great to be towards the pointing end of the field. Congratulations to Andretti and Munoz for pulling off the pole.

THE MODERATOR: We'll open it up for questions for Scott.

Q. Since Carlos isn't here yet, talk more about him. He was so disappointed with finishing second in the 500. What has his progress been like that you've seen over the last year or so?
SCOTT DIXON: Yeah, I think anybody that's in the IndyCar Series right now, the competition level is so high, it's so tight. Anybody that's here and running consecutive races has a lot to show.

Carlos has done a tremendous job at the speedways. He has a very good record. There's no doubt that he can wheel a car.

But unfortunately with motor racing, some days it's your day and others it's not. If he keeps fighting at the right end of the field, he's going to come through.

Yeah, the speedway, that's a tough one. I think he's finished second a few times.

Q. Scott, Chevrolet had a clear advantage prior to Indy. Now it's not so clear. Can you give us your take on the engine competition right now.
SCOTT DIXON: It's definitely a lot tighter. Right now you'd almost say that maybe Honda's got a bit of an advantage. It's hard to read because of the aero kits.

I don't know. I think it's tremendous for the sport. Obviously kudos to them for closing the gap and putting in the hard work and the effort. It takes a lot and requires a lot, especially when you're down and out. The turnaround they've done, achieved, in a somewhat short period I think is great to see for the sport.

Yeah, we've got to definitely keep working and see if we can get back. Obviously right now they're pretty even. They just do things a little bit different.

Q. Talking about 'it really doesn't matter where you start,' yet there's got to be some advantages to being up front at least early. Is there a way for you to manage the degradation of the tires, like maybe on a particular stint, not driving the car as fast or as intense as you may?
SCOTT DIXON: Yeah, I think you're always going to take speed. If you're going to qualify well, it's going to transfer to some speed in the race. With these short weekends, kind of compressed practice sessions, we don't get to run a whole lot, try a whole lot.

I think it definitely pays off to run off the truck fast. Then degradation, there's so many different things, man. It could be balance. It could be you missed the stop on the COP by a little bit so it's pushing a little bit, or understeer.

Breathing the throttle a little bit definitely helps throughout the race if you're getting into a situation where you can utilize that. Also the lane usage. The low lane is definitely quicker, but it also chews up the tires pretty quick.

I think throughout the race you see people running second, third lane. That's for a reason, to try to help the longevity of the speed that you run.

THE MODERATOR: Scott, thank you and congratulations.

THE MODERATOR: We welcome our Verizon P1 winner, Carlos Munoz, his first career pole in his 46th start.

THE MODERATOR: Talk us through your effort today.

When I saw my first lap on my dash, I said, Oh, man, that was a good lap. My second lap was really good, as well. So I was the fifth car out, it took a little bit suffering with my teammates and everything.

THE MODERATOR: You've been a strong oval driver, even back in Indy Lights. What is it about the oval tracks that you excel on?

CARLOS MUNOZ: Last week in Detroit was almost my first Fast Six career, apart from Mid-Ohio when it was rain. I've been, like, getting closer and closer I think. In the ovals, I've been strong a lot. Last year qualifying fourth here, I finished the race sixth.

It's completely different the race from the practice and even from the qualifying. It really feels good to be my first pole in the Verizon IndyCar Series. Hopefully first of many. Like I said, now is focus on the race. I want to win races.

THE MODERATOR: We'll open it up for questions for Carlos.

Q. You are a winner. You won at Detroit. I know two weeks ago you really took that one kind of tough. Do you ever get over that?
CARLOS MUNOZ: Oh, yeah, got over the next day for sure. I knew I had Detroit. Is like my first Indy 500. People say I could have won it if not for the yellow. But I say that didn't happen, nothing would change. I pass over that.

Q. Carlos, you've had some time to practice this morning, not very much time, then you have qualifying. As far as getting your car set up for the race, you won't have it trimmed out like you did for qualifying, but were you able to run some laps in your race setup. How comfortable are you? What about getting up behind another car, do you have a lot of turbulence to deal with?
CARLOS MUNOZ: Like last year, I think practice, I remember last year, practice was a little bit mess for everyone. I wasn't happy with my car.

I run a little bit in traffic with the race balance, everything. The car feels good. But like I say, practice really different. The night, the temperatures are lower, almost no wind in the night. So that makes easier the life for everyone.

If you have a good car, doesn't matter if you start last or first, I think you have also to be really competitive from lap 20 to 50 or 40 something that is a stint here. More than be fast is a real consistent car. Here the degradation. Especially practice here, when it's hot, you really feel the degradation.

CARLOS MUNOZ: Thank you very much.