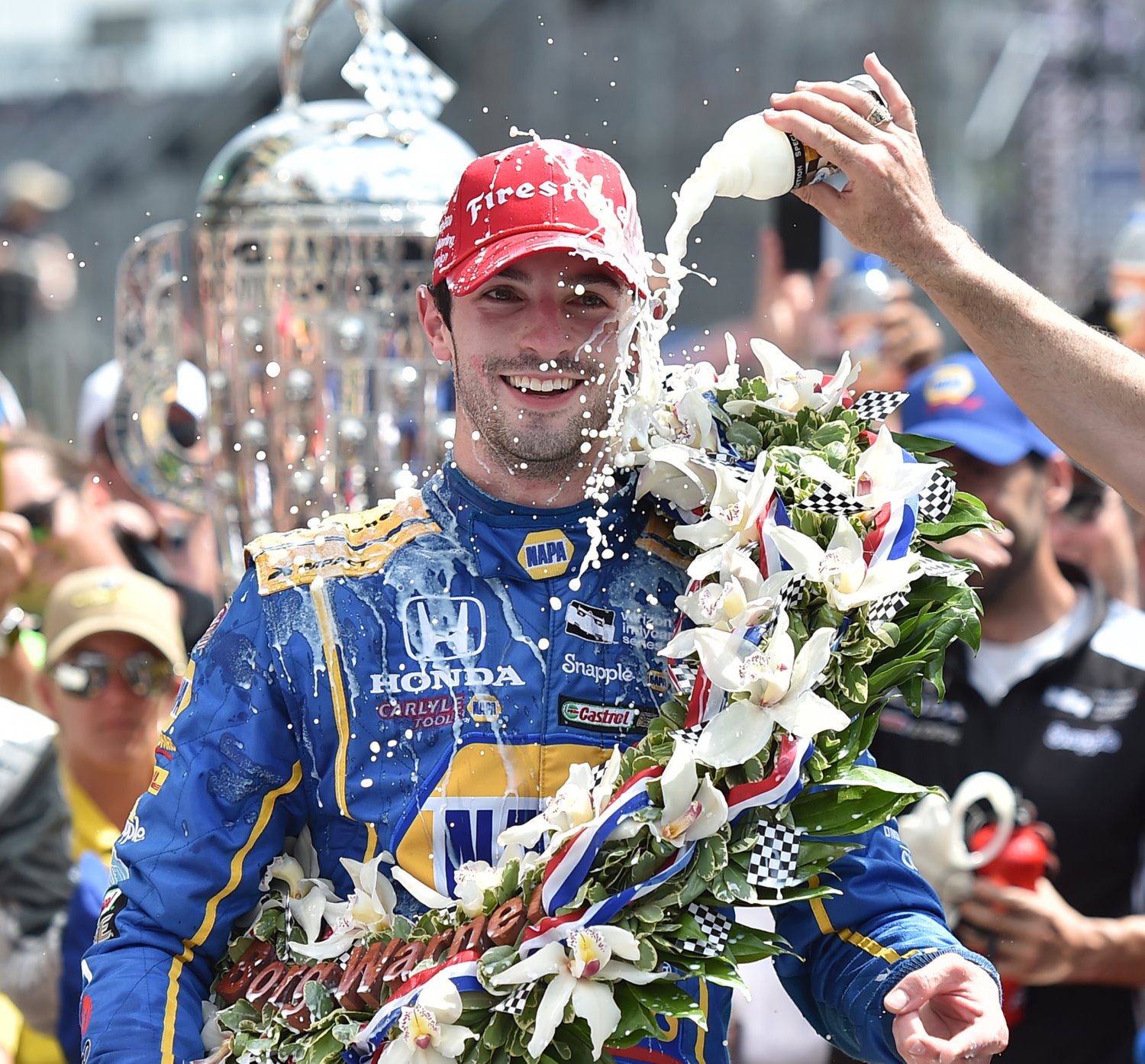 Having started this article with the questionable tactic of quoting myself, that was my reply to the suggestion from a prominent media member that Alexander Rossi was a dark horse candidate to win before Sunday's 100th Running of the Indianapolis 500 presented by PennGrade Motor Oil.

Yes, I conceded Rossi had enjoyed a fine month, regularly posting times near the top of the time charts during practice. Yes, I agreed that he had generally exceeded expectations, and was the clear favorite for Indianapolis 500 Rookie of the Year. But winning? No chance.

For one, as I wrote last week: rookies struggle at Indianapolis. Remember, the last three ‘rookies' (a term I use loosely due to IMS' classification of rookies) to have won the 500 (Graham Hill, Juan Pablo Montoya and Helio Castroneves), weren't really rookies in the traditional sense.

Also, there were a myriad of other intriguing possibilities ahead of Sunday. For example:

[adinserter name="GOOGLE AD"]The above outcomes and others would have all resulted in an Indy 500 Postscript published by Tuesday. Rossi winning? That took some time to process.

I think fundamental to getting one's head around Rossi's win is the acknowledgement that it wasn't accidental. Surprising? Yes. Accidental or fluky? No way.

As for why, we'll get to that shortly. But first, let's explore a few of the reasons Rossi's win is somewhat difficult to make sense of.

Two of the reasons are the already discussed history of rookies at Indy, and potential storylines entering the race. Another factor is the fact Rossi won on fuel-mileage. This of course gives the impression that the Nevada City, CA native benefitted from some sort of obscene luck. And yes, a gutsy call by Andretti Herta Autosport did vault Rossi to the lead. But as we have learned over the past few days, Rossi was not just putzing around, he actually had the fastest car in the race (he was credited with fastest speed on lap 106 at 225.288 mph) and if not for two blotched pitstops, likely would have been racing for the lead the last half of the race.

But because he was not at the front as a result of those pitstop snafus, and to get to the front would have been difficult without some timely cautions, the team adopted an alternate strategy to get to the front – that of skipping the final refueling stop. A lot of thought and planning went into the call that resulted in Rossi's surprise win – surprise to some but not to AR1.com President Mark Cipolloni who was sitting next to me and pointed out what was unfolding starting at lap 164 when Rossi's lap times dropped to save fuel and get him to lap 200 without a stop.

Further, Rossi showed the maturity to process the information and execute an unconventional strategy. Again, not an accident.

Another element making Rossi's victory hard to wrap one's head around is the fact he arrived in IndyCar, relatively speaking, five minutes ago; and the perception surrounding his arrival was that well, he didn't really want to be here anyway. Remember, Rossi had spent years trying to get into Formula One and finally secured a five-race deal with Manor/Marussia last season. He seemed poised to return this year, but was passed over at the last minute in favor of a funded driver. Like a bar-goer stiffed by the pretty girl he'd been chasing all night, for Rossi IndyCar was the girl that looked half-decent after an evening of hard drinking.

And who could deny that stark contrast of Rossi's win to the bitter disappointment IndyCar mainstays Kanaan, Newgarden, Castroneves and Carlos Munoz all displayed after Sunday's race. For followers of IndyCar, the above are "our guys," so to speak, having shown nothing but the ultimate devotion to the series for years. Each had legitimate reason to be heartbroken Sunday, and in the cases of Newgarden and Munoz were as despondent about the result as I remember either one being.

In contrast to the IndyCar devotees he defeated, Rossi hedged his bets for 2016, remaining a Manor F1 test driver. Is Rossi the IndyCar equivalent of the cowboy in a Western, who breezes into town, charms the beautiful women, and cleans out the locals in a game of poker before heading off to bigger and better things? And this was the guy who got to win the centennial running of the race?

To be clear, the above are not my opinions of Rossi. To me, he is a race car driver looking to do what is best to advance his chosen career of driving race cars. However, I am saying that whatever your opinion of Rossi, it's hard to deny there is an element of his win that seems unjust, particularly in light of those who came oh-so-close.

But as I mentioned, such thinking exists only on a surface level. Yes, Rossi's win lacked many of the traditional elements we associate with a 500 winner. And yes, Rossi's plan was to achieve racing glory at Monza, Monaco and Spa, not Indianapolis. Still, to focus on the non-traditional elements of Rossi's victory would be to miss the story of a rise to stardom that was years in the making.

Much has been made of Rossi moving to Europe at the age of 16 to pursue a Formula One career. Although I think it's somewhat futile to place a lot of stock in junior formulae results, (Pastor Maldonado is 2nd on the all-time GP2 wins list if that tells you anything) Stoffel Vandoorne, Daniel Ricciardo, Robert Wickens, Esteban Gutierrez, Marcus Ericsson, and others were competitors of Rossi in Europe. He was competitive with all of the above, and in some cases better.

Further, I was discussing the matter of the European ladder system with a former racer earlier this year. In attempting to explain the differences between the American and European formula ladder systems, this individual said,

"It's a much tougher environment (Europe) to survive in. Pre and post-race debriefs are more involved, drivers are pushed harder, and the ability to process and apply technical information is much more refined. You either learn quickly or you get left behind. The best way to look at it is that the training in Europe doesn't make guys faster, it makes them better (emphasis mine)."

Keep in mind, this is what Rossi spent the better part of the last decade doing: surviving and thriving in the junior European formula. He signed on as a reserve with Caterham in 2012, before severing ties with the team in 2014. That year, Rossi was scheduled to replace Max Chilton at Marussia for the Belgian Grand Prix. However, a last minute deal put Chilton back in the car for the weekend.

Later that year, Rossi was scheduled to replace the then-injured Jules Bianchi for the Russian Grand Prix, but a last-minute decision to field only one car, left Rossi on the outside looking in from his making his F1 debut – again.

After three years of being a reserve driver and no Grand Prix starts, Rossi was at a career crossroads before the 2015 season. Undeterred, he made the decision to return to GP2, for a third season, and enjoyed his best season, winning three races and finishing second to Stoffel Vandoorne in the championship.

Late in the season, he was able to make 5 Grand Prix starts for Marussia, with the hope of a full-season effort in 2016. From there, we know what happened: Rossi didn't have the budget and once again found himself at a career crossroads.

Because Rossi had so concentrated on Europe, those of us who followed his career naturally expected that when his validation came, it would be at Monaco, Monza or Spa. Fast-forward to Sunday, and as he had at the age of 16, when he moved to England, Rossi ironically found himself once again in an unfamiliar environment. But Once again, he would need to adapt to a changed battlefield.

Knowing that fuel-mileage was the only chance his team had of winning the 100th Indy 500, Bryan Herta called on Rossi to execute a tactic he had never done before in a race. And while that specific tactic may have been foreign to Rossi, the process of applying the necessary information quickly and effectively was not. If anything, Rossi has been adapting to changing battlefields for nearly a decade at this point.

So, yes, Rossi's victory was a surprise. And yes, the validation for years of hard work and sacrifice, came in an unexpected manner, time and certainly place. But the fact it came really, should not have been a surprise at all. It had in fact been years in the making.

The California kid who went to Europe to master his craft, had to return home for the payoff to come to fruition. Storybook stuff, really.

I've said this before and I'll say it again. There is not one person on this earth more critical of the Indianapolis Motor Speedway, INDYCAR and Hulman Motorsports stewardship of Indy Car racing; nor is there anyone more skeptical about the future of Indy Car racing than myself.

The above noted, I'll be the first guy to stand up and give Mark Miles, Doug Boles, and crew an A+ for the month of May. It was years of hard work to bring about but everything from the crowd to the pre-race buzz meant that for the first time since I've covered the Indianapolis 500 for AR1, Indy felt like Indy. Also, there were details from other parts of the organization such as the tethers to keep parts on the car that WORKED, which should not go overlooked.

What does this mean going forward? That remains to be seen, and we all know Indy Car racing faces immense challenges. Still, in terms of The 500, IMS, INDYCAR, Hulman, whoever get an A+ from me. Well done!