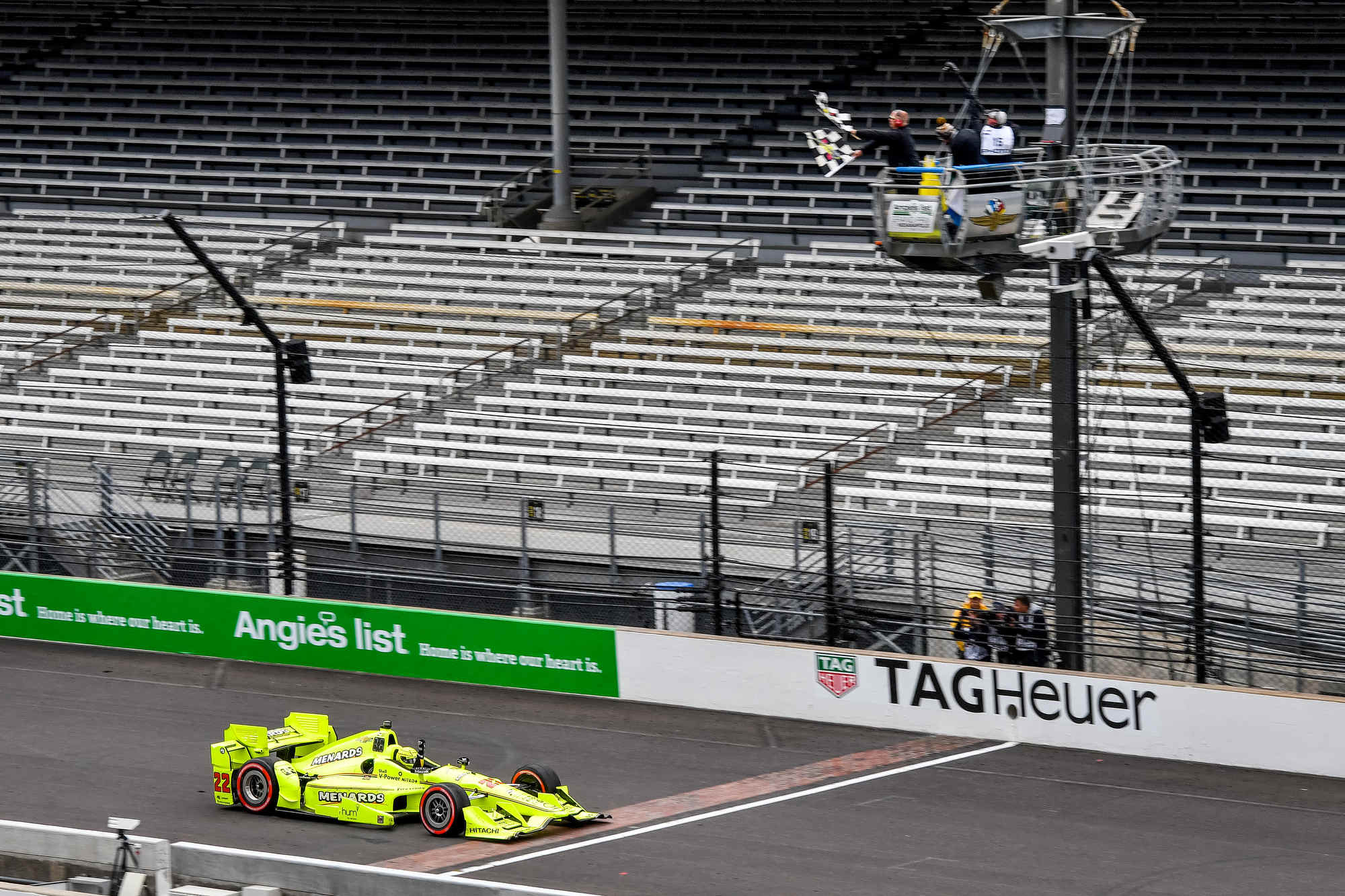 After his victory three weeks ago in the Honda Indy Grand Prix of Alabama, we took an in-depth look at Team Penske driver Simon Pagenaud’s 2016 performance. Coming off consecutive wins at Long Beach and Barber, which followed second-place finishes at St, Pete and Phoenix to open the season, I argued it wasn’t that Pagenaud was running so well rather the manner in which he was performing that should have his competitors in the Verizon IndyCar Series concerned. That theme continued this past weekend at the Angie’s List Grand Prix of Indianapolis.

As he did at Barber, Pagenaud qualified on pole and controlled the race’s early proceedings. And similar to Barber, something of a wrench which could have very easily derailed a Pagenaud victory was thrown into the mix. At Barber, it was a hard-charging Graham Rahal in the closing laps, who made contact with the Frenchman forcing him off course with seven laps remaining. Pagenaud coolly and calmly drove his car through the gravel, got back on course, tracked down a wounded Rahal and ultimately scored a 14-second victory.

Saturday, starting on pole, Pagenaud led 36 of the first 40 laps. However, a mistimed caution on lap 38 forced Pagenaud to pit road and allowed Helio Castroneves and Conor Daly who had pit before the caution to cycle to the front of the field. And with James Hinchcliffe getting off pit road before the Frenchman, suddenly the tables had turned Pagenaud sat fourth on the lap-45 restart with all the leaders needing a mere one stop to make it to the finish.

[adinserter name="GOOGLE AD"]The Frenchman slipped past Hinchcliffe on the restart then settled in behind Castroneves, who had been passed by Daly. While the Noblesville, IN native opened a sizable lead, he was forced to pit two laps earlier than Castroneves and four laps earlier than Pagenaud, who played the fuel game to perfection. And as we saw at Long Beach, Pagenaud was able to emerge from the final round of pit stops with the lead, where he would remain until the end of the race.

Once again, Pagenaud showed it’s going to take a little more than timely pit work to defeat the #22 Chevrolet Team Penske outfit. Whether it’s the ability to dominate from pole (GP Indy, Barber), the ability to lie in the weeds and let the team work its pit road magic (Long Beach), the ability to stay calm after a potentially race-changing coming together (Barber) or the ability to outfox the competition in the fuel mileage game, the friendly Frenchman again showed himself and Team Penske to be a Swiss Army Knife of options in slaying the competition.

Despite having never won an oval race, Pagenaud unquestionably enters next weekend’s 100th Running of the Indianapolis 500 Presented by PennGrade Motor Oil as the clear favorite.

This was of course, Hinchcliffe’s first race at IMS since a near fatal accident in practice for last year’s Indianapolis 500. The very popular Mayor of Hinchtown also sustained a concussion two years ago in the inaugural Grand Prix of Indianapolis when debris from the late Justin Wilson’s car struck Hinchcliffe in the helmet. ,

While there is obviously no cheering in the press box it was heartwarming to see Hinchcliffe on the podium again. And don’t look now but Hinchcliffe has been running as well as anyone in the Honda camp of late, finishing 8th, 6th, and then third Saturday in the last three races.

Hinchcliffe’s return, or the fact that he planned to donate his race winnings to the Alberta, Canada wildfire relief efforts would have been nice storylines to work into the television broadcast, and ‘play up’ if you will. Of course, this was an ABC broadcast.

Look, I can go on all day about missed passes, ignored storylines, names mispronounced, or the pervasive blithe indifference we regularly see on an ABC IndyCar broadcast. But I’ve written that article before, and in all honesty Saturday was really nothing new.

What baffles me is the fact the on-air booth team has remained in place so long. Yes, play-by-play man Allan Bestwick is a professional, who you can drop him on any motorsports broadcast. However, neither Scott Goodyear nor Eddie Cheever – and certainly not the combination of the two – bring anywhere near the energy or passion needed for a quality broadcast. And while they may be fine people (I’ve never met either), there are YEARS of data supporting their lack of on-air quality.

I’ve said this for years, but you, Mark Miles, owe it to the teams, drivers, employees and everyone with a vested interest in this sport to put forth a quality presentation; and you owe that to everyone NOW more than ever. ABC’s broadcasts have failed in this regard for decades now. While the broadcast likely needs wholesale changes, you CAN make on-air personnel and improve the quality of the broadcasts immediately. And time is of the essence because IndyCar is not going to have another opportunity like next weekend for a long time.

Spencer Pigot, Alexander Rossi, Matthew Brabham, Max Chilton, and Stefan Wilson make up what I consider a formidable rookie class. However, I couldn’t help but notice that all five basically breezed through the Rookie Orientation Program yesterday in less than a few hours. Remember, none had driven the IMS oval in an IndyCar prior to yesterday. Rossi hadn’t driven an oval prior to Phoenix last month but was 4th fastest in yesterday’s session that featured all competitors.

Again, nothing against the drivers, as I said this is a fine rookie class. Still, I have to ask: has it become that easy?

With this landmark month in the history of The Greatest Spectacle in Racing, it is perhaps an ideal time to reflect on where IndyCar racing has been, where it is, and where it is going. If you read AutoRacing1 you likely have a pretty good idea of the first two. As for part 3, I think we’re all scratching our heads.

What we can say for certain is that if Indy Car Racing is ever to recapture the imagination of the American public, and stir the souls of the masses, it cannot merely rest on its illustrious history. That has sadly been the modus operandi for the last two decades at 16th & Georgetown. If that mindset persists, there will not be a 200th running of The Greatest Spectacle in Racing.

Yes, the challenge of the Indianapolis 500 entering its second century is not to forever embellish the history of a great event, it is for the event to be great.

While I won’t profess to know all the answers, jumping in the car for the first time, holding the throttle down, and voila posting a top-five time, is certainly not it.