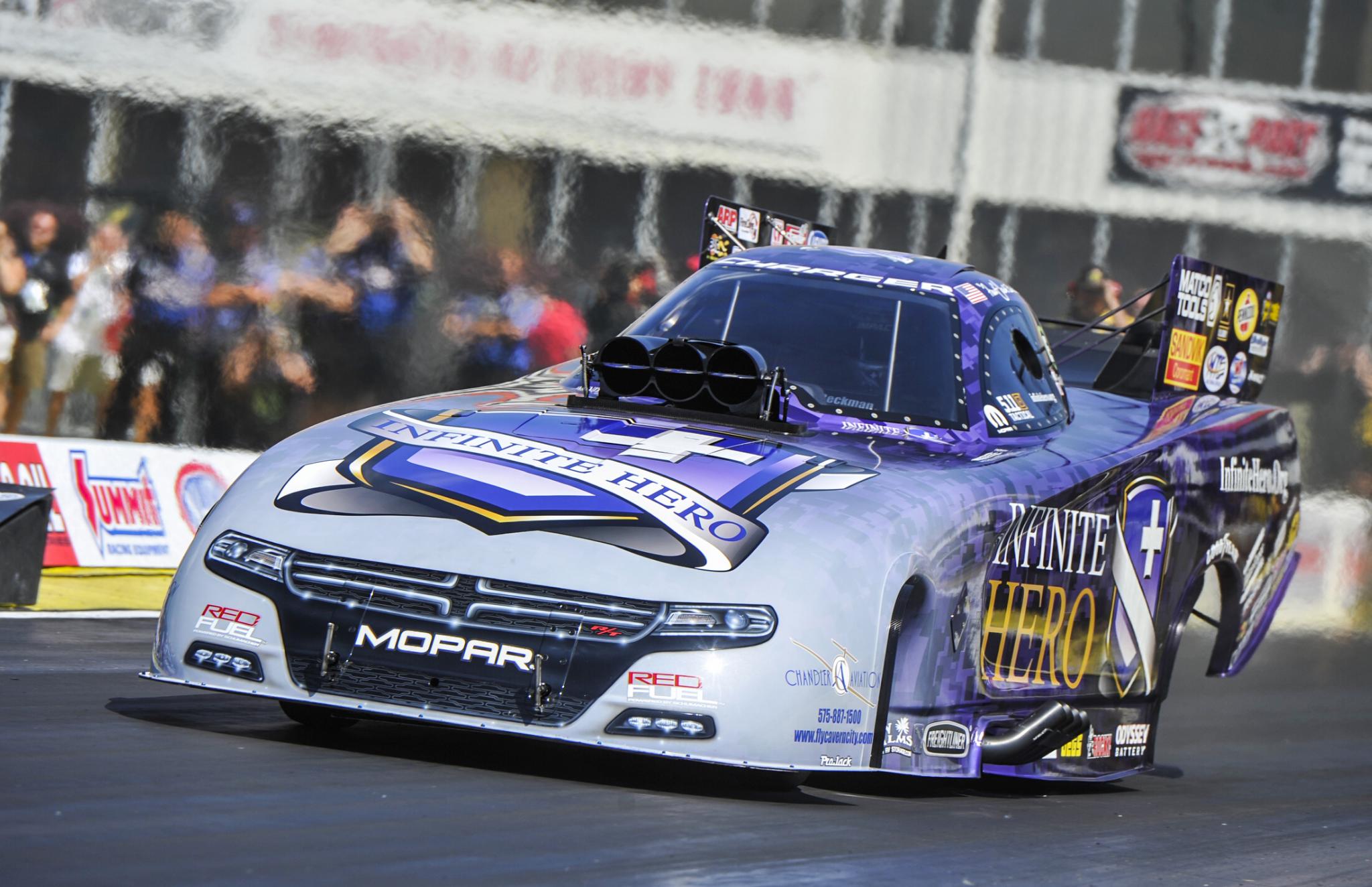 Jack Beckman secured the No. 1 qualifier in Funny Car on Saturday in front of a sold out crowd at Atlanta Dragway during the Summit Racing Equipment NHRA Southern Nationals.

Beckman, a two-time Atlanta winner, used his track record 3.939-second run at 326.32 mph from Friday night in his Infinite Hero Foundation Dodge Charger R/T to secure his fourth No. 1 of the season and 19th of his career. This is his first top qualifier at Atlanta Dragway. Beckman will face Jim Campbell to open Sunday's 11 a.m. eliminations.

[adinserter name="GOOGLE AD"] "I'm happy where we are, qualifying No. 1," said Beckman, the 2012 Funny Car world champion. "It's nice for a little bit of prestige, you get some bonus points that go with it, and it's maybe even nicer because you get a more favorable matchup first round. The whole idea behind that is to play it smart and strategic and win four rounds on Sunday. I think I'll sleep well tonight and come in tomorrow embracing the fact that we'll be the favorite."

Matt Hagan, Beckman's Don Schumacher Racing teammate, qualified second with a 3.943 at 326.08 in his Rocky Boots/Mopar Express Lane Dodge Charger R/T. Hagan will meet Chad Head in the opening round.

Courtney Force powered her Traxxas Chevy Camaro SS to the No. 3 spot with a 3.946 at 326.08 and will race Jeff Diehl in the first round. Force is riding momentum from her win at the most recent event in Houston. She is also the Funny Car points leader.

Kalitta, who won two weeks ago in Houston, powered his Mac Tools dragster to a 3.731 at 328.70 on Friday night to take the No. 1 qualifier in Top Fuel. Kalitta, who reset Atlanta Dragway's elapsed time track record, earned his second No. 1 qualifier of the season and 45th in his career. This is his second No. 1 at Atlanta. Kalitta will face Terry Haddock in round one.

"We're looking good," said Kalitta, the Top Fuel points leader. "I think it's supposed to cool off a little more for tomorrow, but we were getting down a pretty hot racetrack today, so hopefully we've got it dialed in for tomorrow. We're feeling pretty good about it. We'll be digging tomorrow."

Richie Crampton qualified second in his Lucas Oil dragster with 3.761 at 321.50, which came on Friday night. Crampton will face Chris Karamesines in round one. J.R. Todd is third and is paired against Kyle Wurtzel. Steve Torrence, who won at the season-opening Winternationals, qualified fourth and will meet Scott Palmer in the opening round.

In Pro Stock, Anderson used his Friday night qualifying performance of 6.610 at 210.14 in his Summit Racing Equipment Chevy Camaro to carry him to the No. 1 spot. The four-time Atlanta winner has four No. 1 qualifiers this season and has raced to three victories in the first six races of the year. This is his seventh top qualifier at Atlanta Dragway and the 84th of his career. Anderson will race fellow veteran V. Gaines in the first round of eliminations Sunday morning.

"We've had a lot of magic at this racetrack and it makes it even more special to have Summit Racing Equipment on the billboard out there," Anderson said. "We've had four really good qualifying runs and I feel a little bit fortunate because it appears we have our No. 3 car, Bo Butner's car, faster than both Jason (Line)'s and mine. Bottom line is we have three great cars over there at Ken Black Racing. We're going to have a great chance tomorrow."

Jason Line, Anderson's Summit Racing Equipment Chevy Camaro teammate, posted a 6.615 at 209.36 on Friday night to enter eliminations as the No. 2 qualifier. Line has three victories so far this year and has raced to the final round of every race in 2016. The two-time Atlanta winner and current points leader will meet John Gaydosh in the opener.

Butner qualified third and will race against Alex Laughlin to open eliminations. Shane Gray is fourth and will go head-to-head with Kenny Delco.

Sampey rode her Precision Service Equipment/Star Racing Buell to her first No. 1 qualifier since 2008 with a 6.865 at 193.32, which she posted on Friday night. Sampey, who secured the 46th No. 1 qualifier of her career, has four victories at Atlanta Dragway. She will battle Steve Johnson to open eliminations.

[adinserter name="GOOGLE AD"]"It's been so long and we've only been back for a little less than two years, but this feels like the first No. 1 qualifier ever, not the first since 2008," Sampey said. "I'm very excited. We were contemplating not making that (final qualifying) run. I was ready to sit out because we wanted to save the engine and run it tomorrow. I didn't think we were going to do well with the headwind and when they told me it was an .87 I was very excited. We have a little bit more in it."

Pro Stock Motorcycle points leader Eddie Krawiec powered his Screamin' Eagle Vance & Hines Harley-Davidson to a 6.880 at 193.71 to qualify second. Krawiec, who won the season-opening Gatornationals and is a two-time Atlanta winner, will meet Matt Smith in the first round.