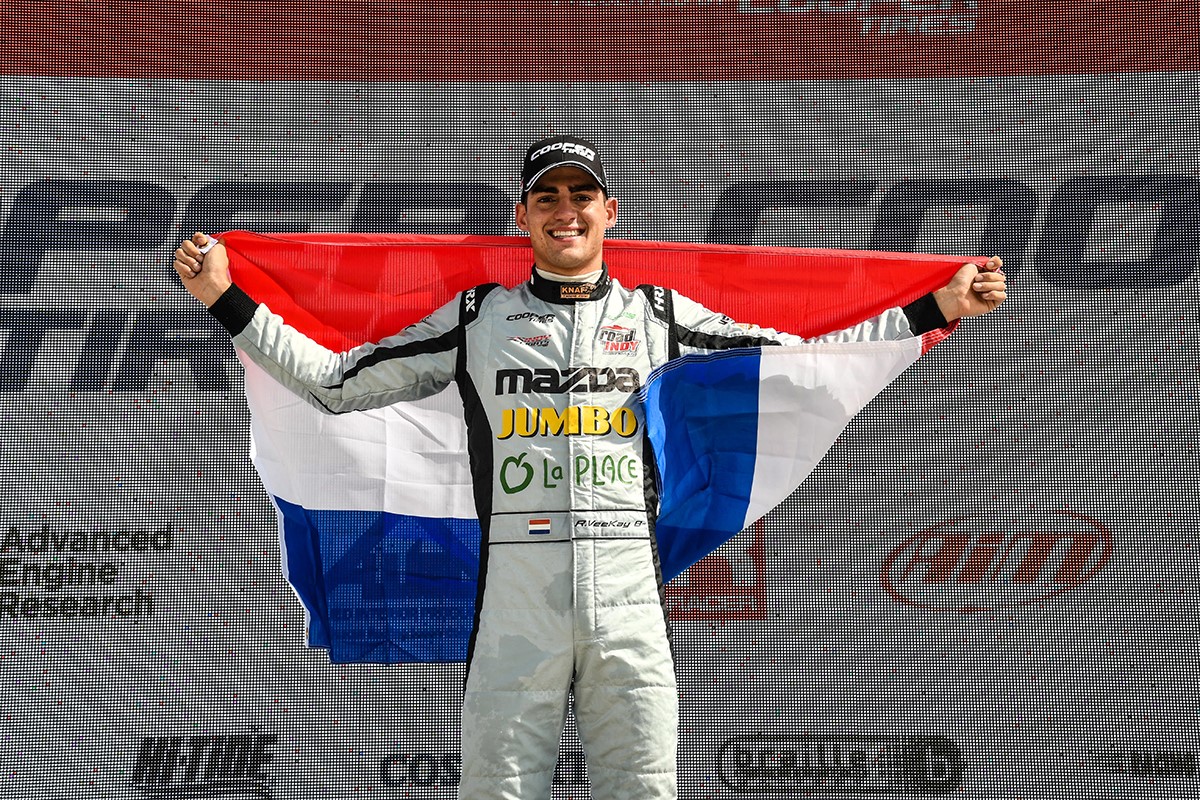 Ed Carpenter Racing announced today it will welcome Rinus VeeKay as the full-time driver of the No. 21 Chevrolet for the 2020 NTT IndyCar Series season. The 19-year-old joins ECR after a meteoric rise through the Road to Indy ranks and a second-place finish in this year’s Indy Lights championship. As VeeKay begins his Indy car career, he will benefit from the guidance of team owner Ed Carpenter, who will be driving in his 18th season.

Born in Hoofddorp, Netherlands, Rinus van Kalmthout began karting in 2009 at the age of 8. With sights set firmly on the NTT IndyCar Series, he transitioned to the Road to Indy in 2017 and launched his U.S. career driving as Rinus VeeKay. He found immediate success, following up a second-place finish in the 2017 USF2000 standings with the 2018 Indy Pro 2000 title. His championship season included seven wins, 10 podium finishes and the Road to Indy career advancement scholarship, which placed him just one step below his ultimate goal. For the 2019 Indy Lights season, VeeKay claimed six race wins and finished on the podium 14 of 18 times en route to a runner-up finish in the standings. In all, the Dutch teenager earned 16 Road to Indy victories and 36 podium finishes in just 48 races.

The newest addition to ECR is ecstatic to have reached the pinnacle of North American open-wheel racing. “I’m so happy!" exclaimed VeeKay. “It’s a dream come true and something we have worked extremely hard for over the last couple of years. To step up from USF2000 to the NTT IndyCar Series in three years is really special."

VeeKay got his first taste of an NTT IndyCar Series car in August when Carpenter selected him for an evaluation test at Portland International Raceway. A second successful test followed at Mid-Ohio Sports Car Course in October, confirming VeeKay’s compatibility with the Indianapolis-based team. Days later, he stepped back into an Indy Lights car at the Chris Griffis Memorial Road to Indy Test and set the fastest time in all six sessions. VeeKay will now focus solely on the NTT IndyCar Series, competing with ECR as a true Indy car rookie throughout the 2020 season.

“I have been following Rinus’s path through the Road to Indy, especially the past two years," commented Carpenter. “It was clear to me that he deserves to be in an Indy car. After his first day in a car at Portland this past season, that feeling became even more apparent. His pace, feedback and demeanor inside the car was very impressive for such a young driver."

Since ECR’s inception in 2012, the No. 21 Chevrolet has always featured an Indy Lights graduate, a trend that will continue with VeeKay. ECR has shown versatility by earning seven wins on each style of track the series competes on – street and road courses, short ovals and speedways. The team currently boasts 28 Top 5 finishes, 20 of which have been podiums. ECR Chevrolets have started on the front row of the Indianapolis 500 six of the past seven years, including Carpenter’s three pole positions. In 2019, ECR was the only multi-car team to have their entire lineup make a run for the coveted first starting position and would ultimately start second, third and fourth.

“I would like to thank Ed Carpenter and his partners for this great opportunity and trust," continued VeeKay. “The number of available seats in the NTT IndyCar Series is very limited, so it’s a great honor that they have chosen me to join their team. I would like to thank Jumbo, La Place, KNAF TeamNL, my new partner Basic-Fit, all my other partners, my manager Charles Crews, but most all my family who made this all happen. I’m really looking forward to the start of the season."

Carpenter echoed VeeKay’s enthusiasm for the upcoming year. “We’re very excited for the 2020 season to get here and have an ECR car return to Victory Lane!"

The 2020 NTT IndyCar Series will see ECR continue to compete with two full-time entries, the No. 20 and No. 21. While the No. 21 will feature VeeKay for the full season, Carpenter will continue as oval driver of the No. 20 in his 18th season of Indy car competition. The road and street course seat for the No. 20 is still under consideration and will be announced at a later date. VeeKay will make his NTT IndyCar Series debut with the season-opening Firestone Grand Prix of St. Petersburg on March 15, 2020.

19-year-old Dutch phenom, Rinus VeeKay, will achieve his dream of becoming a full-time IndyCar driver, piloting the No. 21 Ed Carpenter Racing Chevrolet for the 2020 NTT IndyCar Series season. The Hoofddorp, Netherlands native arrives on the grid as the youngest competitor in the field and with high honor after a successful career in the Road to Indy development series. After finishing runner up in the 2017 USF2000 Championship, VeeKay graduated to the Indy Pro 2000 championship, where he dominated the 2018 season and won the Road to Indy scholarship to compete in Indy Lights in 2019. After six impressive victories leading to a runner-up result in the Indy Lights championship, VeeKay tallied an impressive 16 race wins and 36 podium finishes in just 48 races in his Road to Indy career. You can follow the Dutch rookie via his website RinusVeeKay.com as well as his Twitter, Facebook and Instagram.