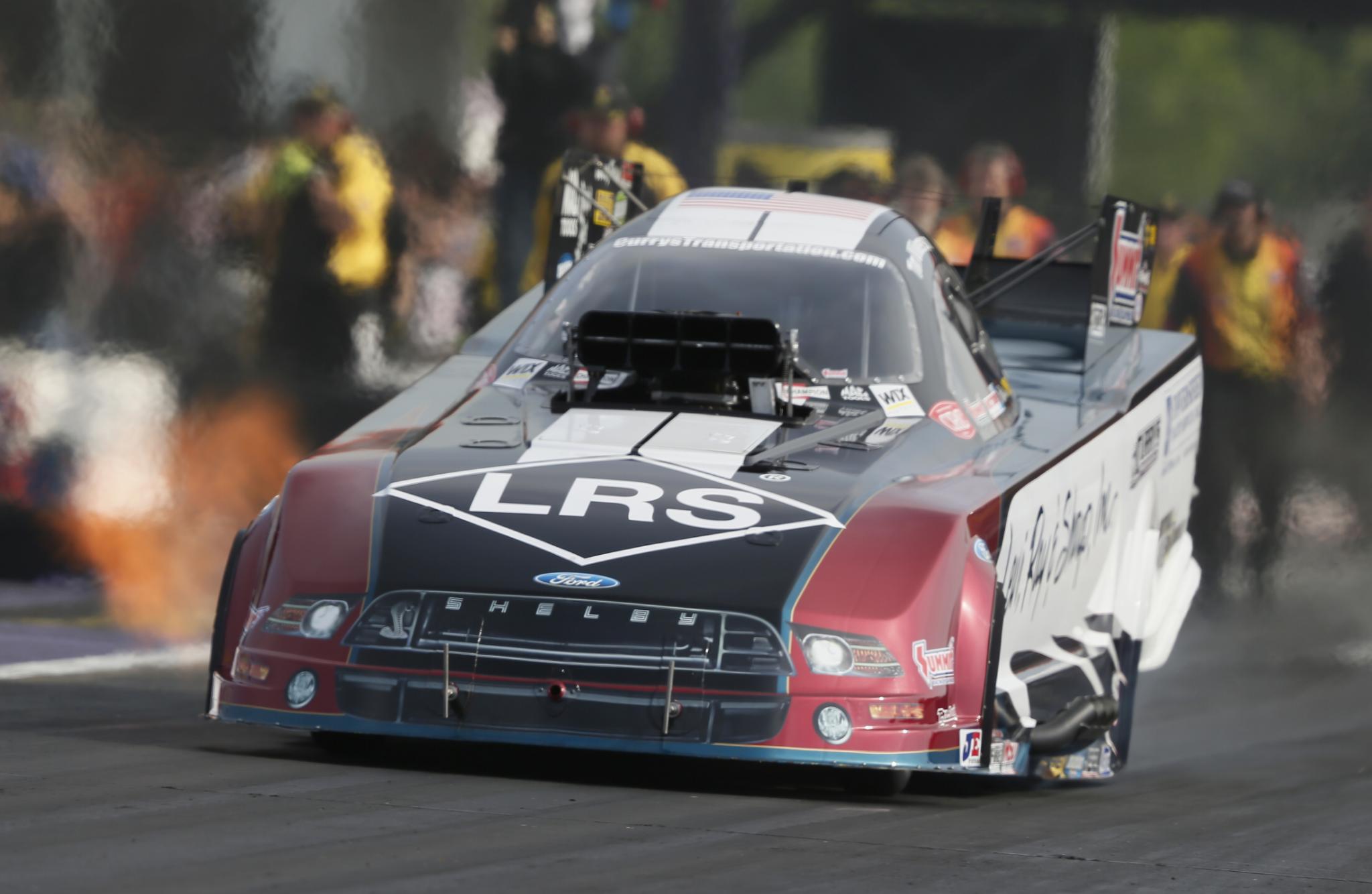 Tim Wilkerson raced to the No. 1 qualifying position in Funny Car at Royal Purple Raceway at the NHRA SpringNationals on Saturday.

Wilkerson, who won his second race of the season last weekend in Charlotte, N.C., earned the 18th No.1 qualifier of his career with his Friday night 3.899-second push at 327.59 mph in his Levi, Ray & Shoup Ford Shelby Mustang. His performance was a personal best and track record elapsed time. This is his first No. 1 qualifier since the Charlotte race in September of 2012. Wilkerson will face Jim Campbell in Sunday's first round of eliminations.

[adinserter name="GOOGLE AD"] "We're excited about how the season has started, of course," said Wilkerson. "Hopefully we can continue our string from Charlotte [last weekend] and not get beaten in any of the eliminations rounds. It's been a great day and a great weekend so far. Going to try and cap it off tomorrow and bring home another Wally."

Alexis DeJoria sits second with a 3.910 at 324.90 in her Tequila Patron Toyota Camry, which she too posted on Friday night. DeJoria will face John Hale in Sunday's opening round. Courtney Force and her Traxxas Chevrolet Camaro qualified third and will match-up against Bob Bode.

In Top Fuel, Torrence claimed his fourth No. 1 qualifying position of the season and third in-a-row with his track record time of 3.724 at 329.42, which he posted on Friday in his Capco Contractors/Torrence Racing dragster. This is Torrence's ninth top qualifier of his career. Torrence, who won the season-opener in Southern California, will face Rob Passey in the opening round of eliminations.

"We're showing off with some Texas boys doing good," Torrence said, "I'm hoping this green hat doesn't curse us tomorrow like it has the last two races. We‘re going to try and change our luck on Sunday. Go a couple rounds and see if we can leave here with a Wally.

"Everything has gone perfect in qualifying," said Torrence, who despite having four top qualifiers this year has made three first round exits. "We haven't been able to carry that into race day every time and kind of stumped our toe a few times."

Doug Kalitta held on to the second spot in his Mac Tools dragster with a 3.743 at 324.36 and will face Terry Haddock in the first round. Clay Millican, who will be racing for his first Top Fuel victory, is in third and will match-up against recent Phoenix winner Leah Pritchett.

In Pro Stock, Greg Anderson powered to his third No. 1 qualifying position of the season and 83rd of his career with a 6.589 at 210.41 in his Summit Racing Equipment Chevy Camaro. The four-time champion will have a bye in the first round of eliminations. He will face the winner of the Vincent Nobile versus Alex Laughlin matchup in the second round.

"We ran great yesterday," said Anderson, a two-time SpringNationals winner. "We made some serious changes today and still ran great. It's a good feeling and we have the data that I think we need no matter what the weather brings tomorrow. I feel good going into Sunday."

Line, the current points leader, qualified inside the top two for the sixth time this season with a 6.590 at 210.28 in his Summit Racing Equipment Chevy Camaro. He will face veteran V. Gaines in the first round. Line will look to win his fourth Wally in the 2016 season.

Two-time and defending world champion Erica Enders stayed in the sixth position and will face Chris McGaha on Sunday. Enders will have the chance to earn her third consecutive win at Royal Purple Raceway.

Eliminations at the NHRA SpringNationals will begin at 11 a.m. on Sunday at Royal Purple Raceway.