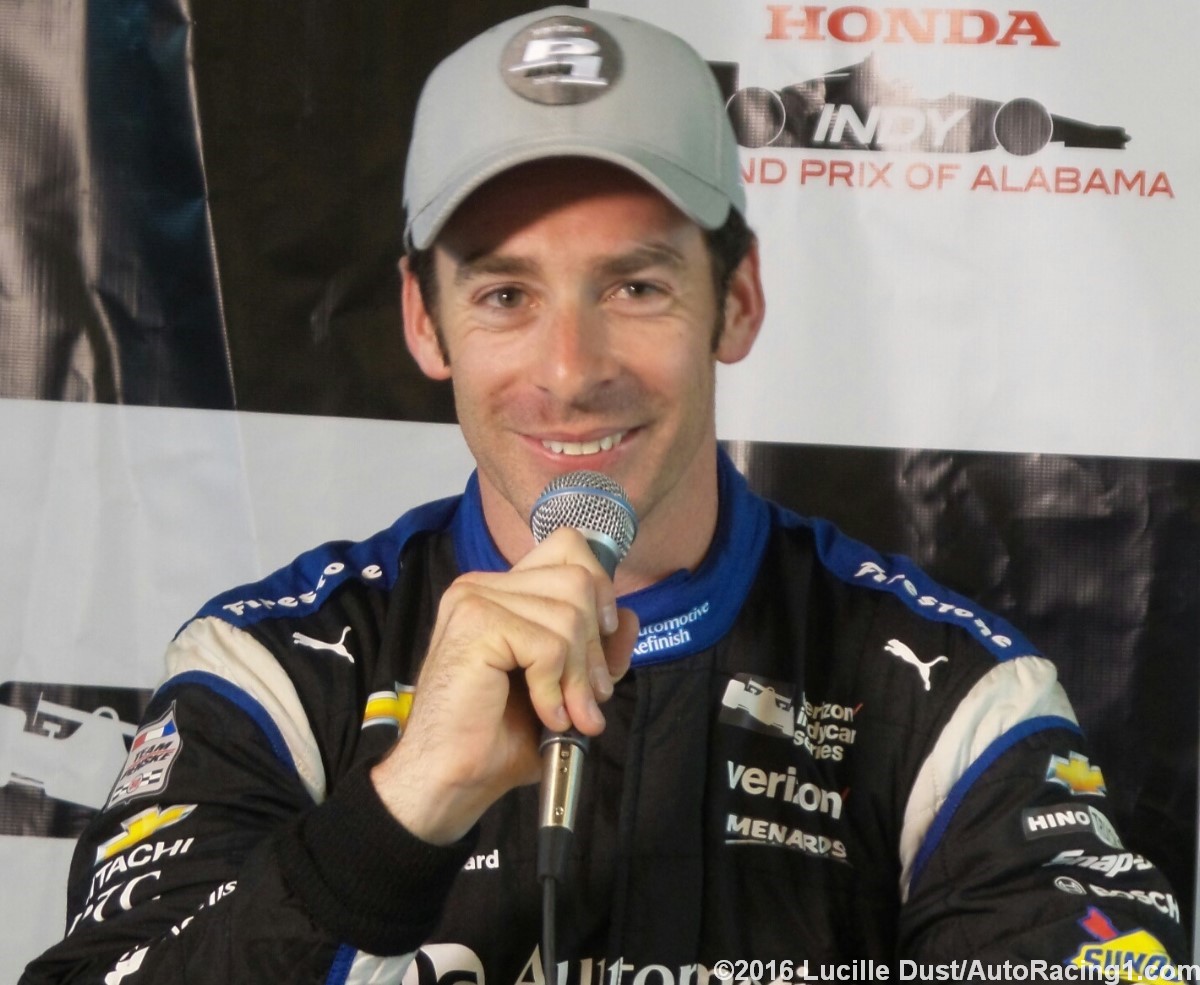 A week after scoring a somewhat controversial victory at the Toyota Grand Prix of Long Beach, the Frenchman left little doubt in Sunday's Honda Indy Grand Prix of Alabama. Starting from pole the driver of the No. 22 PPG Automotive Refinish Team Penske Chevrolet led all but 6 laps, survived a late challenge from Graham Rahal and ultimately scored a 13.747 second victory.

It was Pagenaud's sixth career win, and his fourth top-2 finish in four 2016 races. The Frenchman enters the month of May with a 48-point lead over defending series champion Scott Dixon and seemingly at the top of his game.

Given his fast start to the season (he finished no better than third in any race last season), it's probably easy to assume Pagenaud is on some sort of hot streak, and that an inevitable reversion to the mean is coming soon. After all, Pagenaud has yet to encounter any bad luck in the form of say his two Team Penske teammates Juan Pablo Montoya and Helio Castroneves, who both had tires go down while leading at Phoenix. And certainly Pagenaud is not going to finish in the top-2 every race.

Still, it would be a mistake to think Pagenaud and Team Penske are the racing equivalent of the local teenagers driving around town smashing mailboxes with it only being a matter of time before the cops track them down and put an end to their juvenile delight. Rather, if you take a closer look at the first four races, the No. 22 Team Penske operation is firing on all cylinders. And I believe it is worth taking a closer look at the factors that have launched Pagenaud's rise to a 48-point championship lead.

To start, the No. 22 Team Penske crew has been near flawless. In the recent race at Phoenix, Pagenaud qualified a disappointing tenth. However, during an early cycle of stops his crew vaulted him from tenth to eighth. Later, Pagenaud came to pit road under yellow running fifth on lap 199. He would leave pit road in second position after some quick work by the Penske team.

That's five places right there. And on a weekend where Pagenaud clearly did not have top speed, he was able to salvage not a top-5 or even a top-10, but a second.

Fast-forward to Long Beach, and Pagenaud's win was somewhat debated due to the blend-line violation after the final pit stop. However, lost in that discussion was what exactly Pagenaud and the No. 22 team did to earn the victory.

[adinserter name="GOOGLE AD"]Remember, the Frenchman was third behind Helio Castroneves and Scott Dixon respectively when the last round of pit stops began. With Dixon and Castroneves losing precious tome on-track trailing the end of the lead car of Jack Hawksworth, Dixon came to pit road on lap 51 when the window for the final stop opened. Realizing he couldn't lose more time to Dixon, Castroneves pit on lap 52.

But in attempting to cover one another, Dixon and Castroneves essentially opened the door for third-place Pagenaud a couple of seconds back. The Frenchman took advantage of the clean air to turn in some fast laps before coming to pit road on lap 55. Pulling a Dixon on Dixon if you will, the Frenchman exited pit lane barely ahead of the No. 9 Target Chevrolet where he would stay until race end.

Barber was a little different. Taking matters into his own hands, Pagenaud qualified on pole, and drove away in the early going, having only to surrender the lead on pit stops through the first 82 laps. Things, however, did get a little hairy at the end.

The Frenchman of course struggled mightily when he encountered tail end of the lead lap car Conor Daly laps earlier. To be clear, this is not an indictment of Daly, who as Pagenaud himself noted has every right to race for his position in staying on the lead lap. Still, the Frenchman's struggles with Daly allowed second-place Graham Rahal to do what he did to Josef Newgarden last year at Barber and mount another epic closing-laps charge to the front.

On lap 82, Rahal closed on Pagenaud and made an aggressive move into turn 7. Contact between the two (more on that below) vaulted Rahal into the lead, with Pagenaud having a brief off-course excursion. Ultimately, Pagenaud returned to the track and three laps later closed on a damaged Rahal, and took back the lead of the race.

To summarize: if you look back at Pagenaud's last three races you have very different ways in which the Frenchman found his way to the front.

Right now, it's not that Pagenaud and Team Penske are on a roll that should concern the rest of the field; it's the Swiss Army Knife myriad of methods he and team Penske seem to have at their disposal. Throw in the comfort of his second year with Team Penske and the supreme confidence the friendly Frenchman seems to be driving with and I think we're looking at a lot more than just the early-season championship leader.

I'm going to keep harping on this because I believe IndyCar is at a critical time in its history. The series is in desperate need of a seismic philosophical change with regard to its technical package (to be clear, I didn't say a new car, I said a philosophical change; more on that in coming weeks).

I've offered the thesis over the past few weeks that a good place to start would be to ditch the ugly and costly aero kits. And God willing, there will come a day when the hideous things and term aero kits can be once and for all banished to the ash heap of history.

Unfortunately, it doesn't look as though it will be anytime soon.

"I don't think aero kits go away," Hulman and Co., CEO Mark Miles said during the recent Long beach weekend. "We've got them. We've learned a lot. Both companies have learned a lot. I think the questions are more from conforming them in some way to continuing the competition between them, what's the right mode to be in. We're looking at possibilities from continuing with some shaping of the extent of the competition between them to every other possibility."

Last weekend INDYCAR president of competition and operations Jay Frye reiterated this point noting, "we have a lot of things on the table for next year and one single aero kit for both Honda and Chevrolet is one of the things we are considering,"

Now, in fairness to Miles and Frye they have to answer the question while at the same time not being overly-committal to one project or another. Like any corporate leader both left Ad wiggle room should one project on another go awry. Therefore, it's hard to draw any definitive conclusion from what they said.

However, I will say what I hope it doesn't mean. I hope that Miles and Frye were not essentially giving us corporate-speak versions of the following message:

Don't think for a second we're going to show any accountability or anything and merely admit the decision to adopt those hideous things was an abject failure to douse this pig of a car in lipstick. And since we as a company are obsessed with breaking track records, we're not going to surrender all the speed the aero kits give.

[adinserter name="GOOGLE AD"]Also, because we have nothing even mildly resembling a strategic long-term plan to devise a compelling formula featuring increased horsepower and reduced down force, we're going to continue crawling up this this rat hole of a plan because well, it at least sort of resembles a plan. Further, by randomly pasting wings and plates to the side of the car we can at least ostensibly avoid the spec-series accusation and convince people that we're encouraging innovation.

Again, I hope that's not what they were thinking. I fear however, that my translation is a lot closer to the truth than many would care to admit.

When it comes to tearing INDYCAR Race Control a new one I'm usually the first guy in line. However, looking at the overhead of the Pagenaud-Rahal deal, yes you could argue Rahal was overly aggressive. But Pagenaud didn't exactly give him a ton of room either.

Honestly, I saw two guys going hard for the same piece of real estate, and nothing overly egregious from either party. Racing incident. No call was the right call.