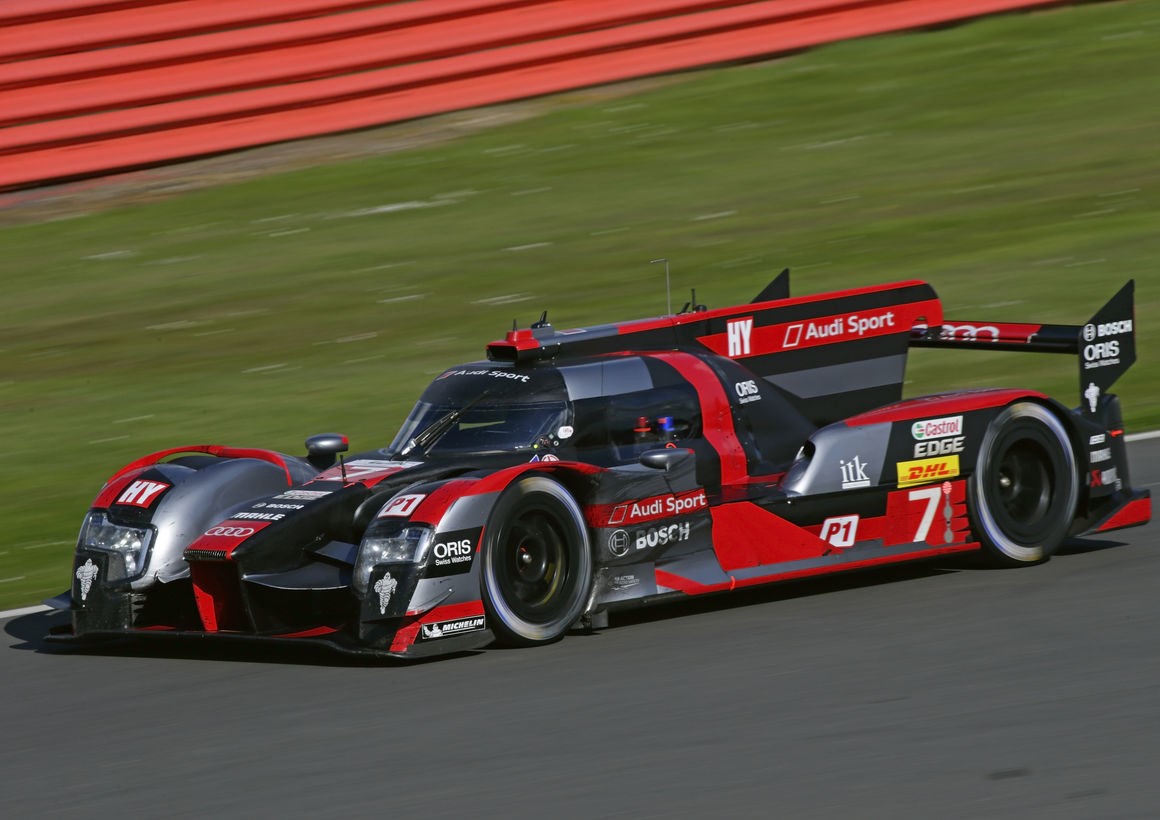 Andre Lotterer, Marcel Fassler and Benoit Treluyer took their second consecutive win at the 6 Hours of Silverstone after an incredible race-long battle with Porsche giving the all-new Audi R18 win on it's race debut to delight Audi Sport Team Joest.

A late race puncture for No.2 Porsche 919 Hybrid driven by Neel Jani took the pressure off Fassler who won by 46-seconds.

Jani, Romain Dumas and Marc Lieb claimed second place after losing time early in race with a technical issue and through contact with the No.67 Ford GT.

Rebellion Racing celebrated 1-2 in the LMP1 Privateer class and 4th and 5th overall as No.13 car of Alexandre Imperatori and Dominik Kraihamer and Matteo Tuscher took maximum points.

It was a comfortable victory for No.71 AF Corse crew of Sam Bird and Davide Rigon as they got the first ever victory for the new Ferrari 488 GTE model.

The next round of the 2016 FIA World Endurance Championship takes place at Spa-Francorchamps on May 7.

Audi celebrated the 106th victory of an LMP race car in the company's history at Silverstone. Quotes following the victorious season opener of the FIA World Endurance Championship (WEC).

[adinserter name="GOOGLE AD"]Dr. Wolfgang Ullrich (Head of Audi Motorsport): "This was a race that remained a thriller up until the checkered flag. The first fielding of the new Audi R18 resulted in both the first pole position and the first victory. This entailed a huge effort by the whole team. The result was the greatest way of thanking everyone who had worked so hard. We're very happy about this result. At the same time, the retirement of number "8' showed that there's still a lot of work for us to be done."

Ralf Juttner (Team Director Audi Sport Team Joest): "Like last year, we again experienced a thriller at Silverstone. It was extremely close. At the same time, Porsche, Toyota and us suffered some setbacks. I'm happy that our number "7' got through the race without any issues whatsoever and won with a strong driver squad. The mechanics of the number "8' in the final stage helped with the sister car because we knew how close it would be. The trophy is a sweet reward for some strenuous months. We have to continue to work intensively but following a success like this it'll be a little easier."

Marcel Fassler (Audi R18 #7): "What a riveting race. And the traffic on track made everything even more unpredictable. I was always informed about the time gap with the Porsche that was chasing me. I managed to control the advantage well because the way our Audi R18 felt was awesome. A huge "thank you' goes to our trackside squad, as well as to our employees in Neuburg and Neckarsulm. This is their success, too."

Andre Lotterer (Audi R18 #7): "When you win you arguably had the best car as well.But we also recognize how fast the number "1' Porsche was today. I'm happy that our car was running so impeccably. That provides our engineers with a boost. Obviously, there's still some more work to be done, as the retirement of our sister car has unfortunately shown. Still, the entire squad can be happy about this initial success."

Benoit Treluyer (Audi R18 #7): "For us, this was the best way to open a season as you can imagine.The team's victory is a tremendous success. However, our sister car's misfortune was a shame. But in spite of this we again saw the great sporting spirit that exists at Audi and in Audi Sport Team Joest. They all work towards achieving a goal and support each other – such as the mechanics of the number "8' who helped us today. The new Audi R18 is great fun. That gives you a relaxed feeling in the cockpit."

Lucas di Grassi (Audi R18 #8): "A great result forAudi Sport following an intensive winter is the main thing today – congratulations to the whole squad. We'd have liked to contribute to the result as well, but unfortunately suffered a failure of our car's hybrid system. Obviously, we're disappointed because in qualifying and at the beginning of the race we saw what was basically possible. We were even running in front of our sister car. "Thank you' for that to the whole team."

Loic Duval (Audi R18 #8): "Sincere congratulations to Audi on clinching victory. Now we know that our car is basically in contention for winning. "Thank you' to Audi Sport for a car that we took a position on the front row with. The second place my teammate Oliver Jarvis held in the beginning was great too. Unfortunately, a defect got in the way. Our mechanics and the engineers did an outstanding job throughout the weekend."

Oliver Jarvis (Audi R18 #8): "On taking grid positions one and two we managed a perfect start to the weekend. In the beginning, Audi was in front, but we also saw how fast Porsche is. I was ahead of our sister car by five seconds some of the time. But then a hybrid problem cropped up which initially cost us four seconds per lap and ultimately resulted in retirement. That was very disappointing. Now we'd like to show what we're capable of from the second race on."