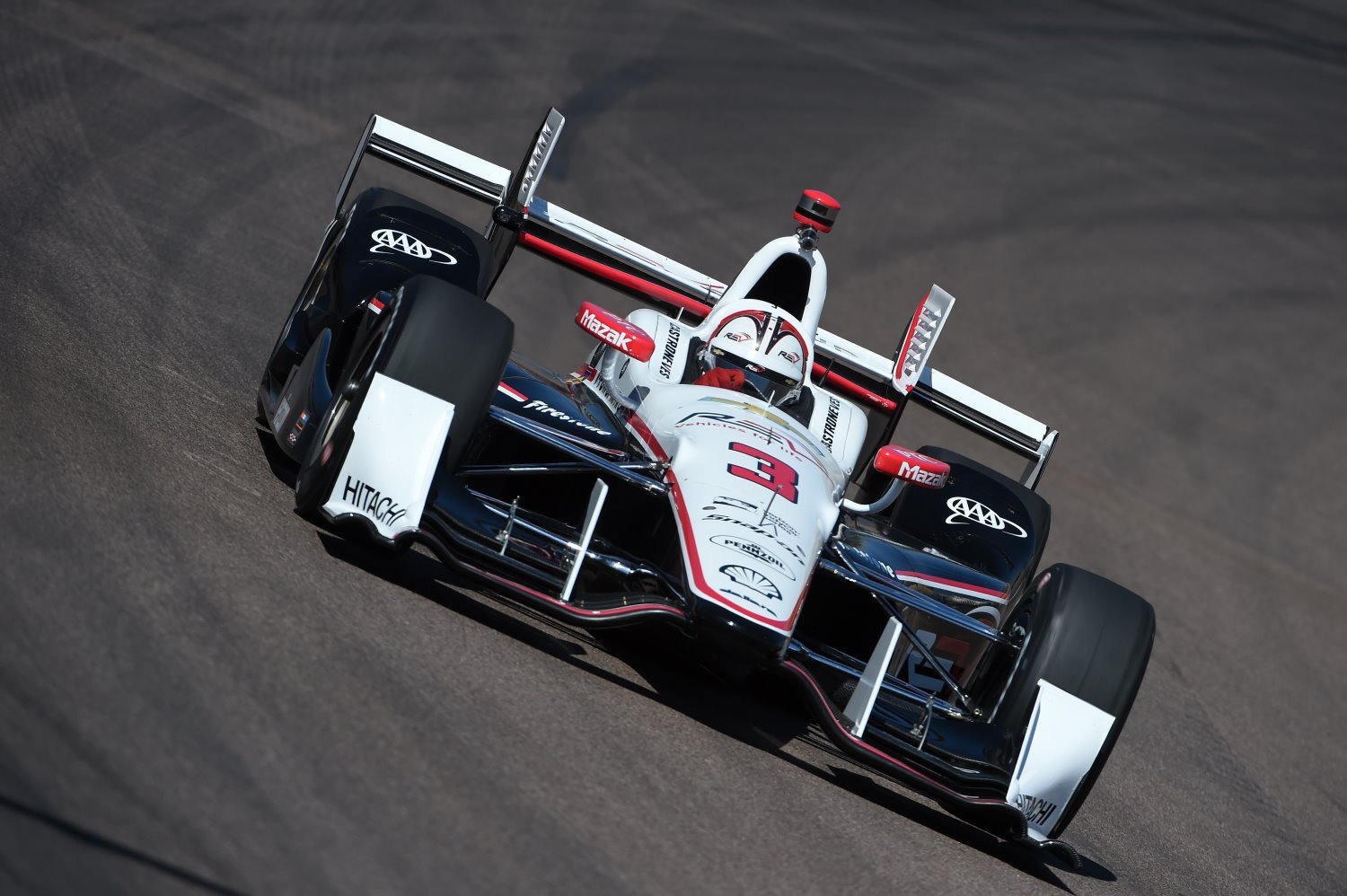 I'm usually a stay the course guy. You know, decide on a plan, implement said plan, stick with it even when times get tough and ultimately see it to fruition. As for what exactly that has to do with automobile racing, let's just say it's not like me to argue for pressing the eject button 18 races into a major engineering project which an eight-figure investment was needed to bring about.

Still, I feel pretty confident in saying, it's time for INDYCAR to ditch aero kits. Now.

Let me be clear: what follows is not a commentary decrying the lack of competitive balance. Major auto racing is big boy stuff, not some egalitarian enterprise. To me, the problem is not the fact Chevy is currently cleaning Honda's clock in the Verizon IndyCar Series. Kudos to Chevy. The problem as I will illustrate exists on a different level.

I also take no ‘I told ya' so' pleasure in calling for the kits to be scrapped. The reality is well, I didn't tell you so. While not convinced that aero kits were a solution to some of the ills of spec racing and the lack of interest in modern Indy Car racing, like many others I was curious about something that conceptually seemed very novel.

I'm also not taking the series or anyone else for that matter to task for implementing the idea. I was as intrigued as anyone when former INDYCAR CEO Randy Bernard talked of Boeing, McLaren, and whoever else designing kits, and the branding opportunities they presented. I was present in the boat house on Belle Isle in 2013 the day former IndyCar vice president of competition and operations Derrick Walker announced the plan to introduce the kits starting in 2015. The presentation was extraordinarily professional as Walker convincingly sold the idea of the kits. “Our fans are crying out for innovation," said Walker to that day, to which my response was (figuratively speaking) “AMEN, Brother!"

I can also tell you that shortly after Walker's announcement, AR1 President Mark Cipolloni and I walked through the paddock asking team principal types their opinions on the announcement. Most team owners were firmly on board, with Dale Coyne's strong objection sticking out like something of a sore thumb at the time.

[adinserter name="GOOGLE AD"]Later that season, I followed up with Coyne at Baltimore seeking further insight. I wondered if he had perhaps softened his opinion, and/or he would he be willing to offer further insight. No, was if not a direct quote then certainly implied to part 1; as for part 2, he had an interesting quote:

“You know, we have this whole thing upside down. We're trying to market an engineering endeavor instead of having engineers build around a marketing plan. Our focus should be on the commercial side first, then we can do all this other stuff."

I won't say that I firmly came around to Coyne's position at the time, as I continued to seek other opinions and ultimately took a wait-and-see mentality. But having waited, and having seen, there is little evidence the kits have made anything better, and loads of evidence they have made things worse.

To me, the simplest place to start is cost.

Obviously, racing is not cheap, and team owners don't get into the business with the idea that profits are going to be easy. That said, expenditures should be justified as either necessary or providing return on investment.

The first we can certainly eliminate, and after 18 races I see absolutely no evidence of the second. I don't see more builders lining up to build kits, ready to throw their marketing dollars at the series nor have I heard anyone waxing poetic about that trademark Honda rear pod or Chevrolet front wing.

What I do see is a racing product that isn't as good as it was in 2012, 2013 and 2014. In an era where return on investment in IndyCar is suspect at best, I see in aero kits an endeavor reeking of all the engineering arrogance and excess one might see during a boom time.

Last, the aero kits fundamentally work counter to the technical direction counter to that the series should be pursuing.

As I have repeatedly stated in recent columns a lesson from the early 2016 season has been less down force = better racing.

While race engineers will always be looking for the edge technically the current down force/horsepower ratio in IndyCar is entirely out of whack. We saw this in Phoenix, a track that has forever been known as a drivers' track. However, excessive aero grip limited straightaway and corner speed differentials, which made passing very difficult and resulted in a rather uninspiring show.

To be clear, I am not blaming that entirely on the aero kits as we know there are other factors involved. I am merely saying the aero kits are a contributing factor to a diminished show.

And I'm not the only one who thinks, nor is this phenomenon confined to oval tracks. Talking this offseason reigning series champion Scott Dixon told Fox Sports “behind cars the dirty air was much worse. It was hard to get close on road courses."

As Dixon notes, the kits have created more disturbed air over the cars, rendering it more difficult to overtake.

And while I've heard some hard-core fans talk about the subtle differences between Honda and Chevrolet kits, I cannot visually tell the difference between a Honda or Chevy. Of course, the notion that the kits provide branding opportunities for manufacturers has been a fundamental element supporting their introduction. However, it appears, that the kits at best are something of a bone for the diehards who pick up on their subtleties.

Another reason people have championed the kits is they provide another layer of competition. Although technically true, such thinking is misguided.

Remember, the kits are homologated prior to the season and while the teams can adapt wing angles and such, all the manufacturer competition is during the offseason in shops and wind-tunnels not places fans buy tickets to go. When the fans do buy tickets and turn on their televisions much of the competition has ended, as the teams are largely ‘locked in' to what they have for the season.

And really, are there people out there who consider randomly attaching wings and plates to a Dallara to be innovation?

Anyway, to briefly review the aero kits have:

Oh and did I mention INDYCAR, it's teams, and partners are actually PAYING real American dollars for the above?

Of course, some will point out that the kits were brought about at the urging of the manufacturers Chevrolet and Honda whose dollars have subsidized the research and development. And arguably, shelving a project Chevy and Honda have sunk millions into probably isn't the best business move with two of the series' best partners. These are fair points but they miss bigger picture matters.

For one, assuming Chevy and Honda still in fact want aero kits doesn't mean INDYCAR should acquiesce. Although Chevy and Honda are outstanding partners they do not determine the parameters of competition. The series does. To me, these kits are not doing the series any good at the moment. And really, I'm not sure what good they're doing the manufacturers either.

Also, just because a project has money sunk into it doesn't mean it should continue. This would be akin to saying that a recovering alcoholic should drink the bottle of whisky in the closet because well, it's already paid for. Such thinking is limited to finances, and doesn't take into account costs that arise from continuing a deleterious endeavor.

[adinserter name="GOOGLE AD"]Further, the fact ‘someone else' is partially footing the bill doesn't mean you have no regard for the expenditure. If I am provided with the budget to rent for work purposes, I don't rent a Hummer, because well, the company paid for it. I rent something within reason.

And maybe, there is an ROI with the aero kits. If someone produces some tangible evidence justifying the expenditure, I will happily back down from this stance.

But until then, all I see are random plates and wings clumsily attached to a DW12; plates and wings that cost a lot of money, do nothing to improve the show, and take the series in a direction counter to that it should be pursuing. Further, given the costs listed above, I have seen no tangible benefit to the kits other than minimal interest from diehard fans and the technical claim that the series is no longer ‘spec.'

While I'm no champion of spec racing, I think right now, it's a lot better than the alternative. And when that conclusion is reached, really, what's the wait?

Somewhere between incredibly little and not at all, is usually my level of concern about the individual selected to drive the pace car at an automobile race. That said, kudos to the Indianapolis Motor Speedway for absolutely getting it right with the decision to have Roger Penske drive the pace car at Indy this year.