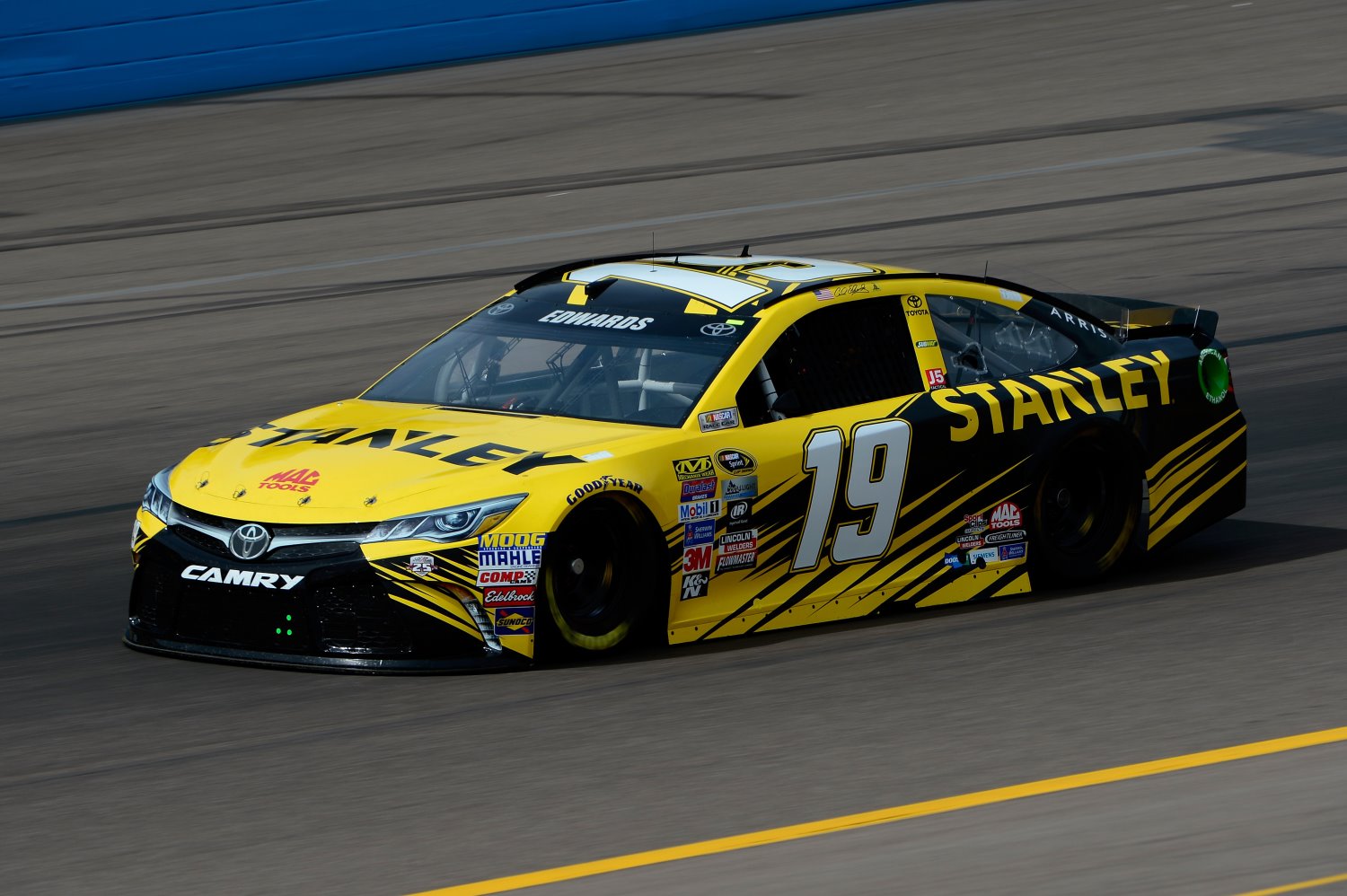 Carl Edwards claimed his first Coors Light Pole Award of the season on Friday at Texas Motor Speedway, posting a final-round speed of 194.609 mph. Edwards is the sixth different pole winner in seven races this season.

Edwards has won at Texas Motor Speedway three times, though his last trip to Victory Lane in the Sprint Cup Series came in 2008.

Joining Edwards on the front row is Joey Logano, who completed his final lap at 193.306 mph. Logano had an identical speed to Martin Truex Jr., but won a tiebreaker to place second in qualifying for the Duck Commander 500 on Saturday night (7:30 p.m. ET, FOX, PRN, SiriusXM NASCAR Radio).

Chase Elliott was the fastest NASCAR Sprint Cup Series (NSCS) Rookie-of-the-Year contender in today’s qualifying session with a lap of 27.974 seconds, 193.036 mph in his No. 24 NAPA Auto Parts Chevrolet SS at Texas Motor Speedway. The Team Chevy driver will start fourth in the 40-car field in Sunday’s Duck Commander 500.

How did the track feel during qualifying?

“This is fun, guys. Each time we went out there, even in qualifying trim when usually the car is just nailed down and stuck like glue, the car was sliding around. If I missed the corner a little bit, I could adjust and get the car to kind of turn where I wanted to, that’s really fun. I think Goodyear has done a really good job, I applaud NASCAR for taking downforce away. We haven’t raced yet, but it’s going to be a lot of fun to drive these cars here."

[adinserter name="GOOGLE AD"]Were you nervous when Joey Logano went out for a final late qualifying lap?

“I was, it was so easy to make a mistake. Each one of my laps I made a mistake and I assumed when he went out again, he made a mistake and he knows what it was and he’s going to go address it. I wasn’t sure, because the tires wasn’t falling off much and I wasn’t sure because the tires weren’t falling off too much, I wasn’t sure if he was going to be able to do it. He had me nervous. That’s really cool. Those guys have been so fast in practice and it was cool to be able to qualify in front of them. That was a lot of fun."

Were you confident ahead of qualifying that you would be the pole sitter for Saturday’s race?

“I wasn’t sure. The condition surprised me. I thought it was going to be sunny and the track temp would be high and that we’d be going that fast. I just wasn’t sure. Dave Rogers (crew chief) and those guys do such a good job predicting what the balance is going to be, that was really the key for me. They gave me a car, the first run surprised me how good it was. I wasn’t certain and didn’t know what to expect. Honestly the car was better than I was. It was fast."

How would you assess the Joe Gibbs Racing intermediate program this year?

“I think there’s no one thing we’re trying as a group. Everyone has just been progressively working on these cars and trying to get them better and better and I think it really shows. We were really fast last week at Martinsville. We’re pretty fast here and just overall the JGR Toyotas, they’ve just been getting better and better. I wouldn’t trade cars with anyone in the field. It’s really cool to be driving this 19. To answer your question, no one thing, it’s just a steady progression to make it better."

Has parenthood changed you as a person and a driver?

“I don’t know, I think it changes anyone. The biggest thing for me is, as I spend more time in this sport, and as I go along and compete every year, it really narrows down my focus. I know for me personally, I have some very specific goals. I want to be a champion, I want to represent my team and my sponsors. I think for me personally, if anything, over time my goals have narrowed down and my specific goal is to finish first there at Homestead and be the champion. That’s it. The going to new places, the new people – all the stuff you start in this sport that is crazy, the atmosphere of it, I kind of have whittled some of it down and been able to focus on the racing and that’s been fun."

What do you think racing at night for the first time this season be like?

“I don’t know what to expect. I think this track is going to be extremely temperature sensitive. I think we saw it yesterday at the end of practice, I have a feeling it’s going to swing hugely throughout the event. I think tonight, with the cloud cover it will be a little bit deceptive, but the temperature swing won’t be as much. From the beginning of the race, to night, it’s going to change a lot, I think. I’m not sure exactly, we’ll have to figure out what we’re going to plan for, I guess."

Does your confidence raise when you go to a track like Texas that you enjoy racing and have been successful at?

“My confidence level is pretty decent, but now it’s really up there. To have a fast race car is huge. I like this place and I like a few specific things. First of all, Texas is a really cool place. A lot of good people here and they know how to have fun. Eddie Gossage (track president) makes this thing – the riffle for getting the pole, and all the stuff that goes on around the event is really cool. Second, the track is fast, but I think it was paved in 2001. The pavement is old, so that’s good. Really the key to me is the lower downforce and the tire. To me it feels like it’s going to be fun."

How is the tire fall off so far this weekend?

“I don’t know. I don’t remember exactly how many seconds at Atlanta, but we’ll see here when we get 15 laps into a race, we’ll know. The coolest thing for me is it seems when it took rubber, it visually appeared much darker where everyone is running. That really is a bigger factor from the driver seat because as the race goes on, people will rubber up different places and the track won’t be the same at lap 200 to 220, it will change. For a driver, that is fun to be searching around out there. It’s like dirt racing, you really have to go out and try to make the car go faster."

Can you flat foot this track on new tires?

“I was no where near flat footed there. You still have to lift out of the throttle, slide the car down in the corner. I think we’ll learn a lot from the XFINITY race tonight, to watch and see how much they fall off. See what the advantages are off of new tires. It’s a pretty good package right now. Definitely this direction is the direction to go. When you drive down in there, you’re going really fast. You have to decide how much you want to abuse those tires and how much you’re going to slide. That’s fun."

ON HIS QUALIFYING SESSION:
“I thought it was definitely an improvement. I’m really proud of the improvements we made from Round 1 all the way through Round 3. I’m very excited that we made the third round and was able to get a nice top five starting spot. The most important thing is getting our car driving good here later. This is a very valuable practice. A lot of night racing that you do, short track racing, or even a lot of the NASCAR stuff you practice during the day and race at night. I’m very glad we have this night practice session to get our car, at least you can get it consistent conditions for what you might see tomorrow night, hopefully. We need to make the most of this practice, try to get our car driving the best we can to be good tomorrow night. That is the most important thing. It’s nice to have a good starting spot, but the most important thing is to be good in the race."

HOW MUCH DID THE WEATHER TODAY THROW YOU FOR A LOOP?
“I think for us, I was expecting that qualifying session to go a lot different than what it did because of qualifying late afternoon like that. I figured the sun was going to be on the track and it was going to be a lot slicker. It had a lot of grip and guys were still able to run really fast laps times, especially the guys that were first/second range they were moving pretty good. I didn’t expect that. I thought it was going to be more slick today, but like I said, proud of our NAPA group. It’s cool to be back in NAPA colors this week and looking forward to this practice later for sure to try to get a little better."

HOW IMPORTANT IS IT TO START UP FRONT HERE AT TEXAS IN ORDER TO GET A GOOD TOP 10 FINISH?
“Well, we obviously want to do better than a top 10 finish. We want to be contenders and I think we have the team capable of doing that. For us, we recognize that having a good pit road selection is the biggest thing, starting good is nice, but I think that pit road selection is very important. You really have to have your car driving good. I think it’s going to be slick. Just because you start good doesn’t mean you are going to stay there. You have to work on your car in race trim to make it the best you can and hopefully try to move forward tomorrow night."