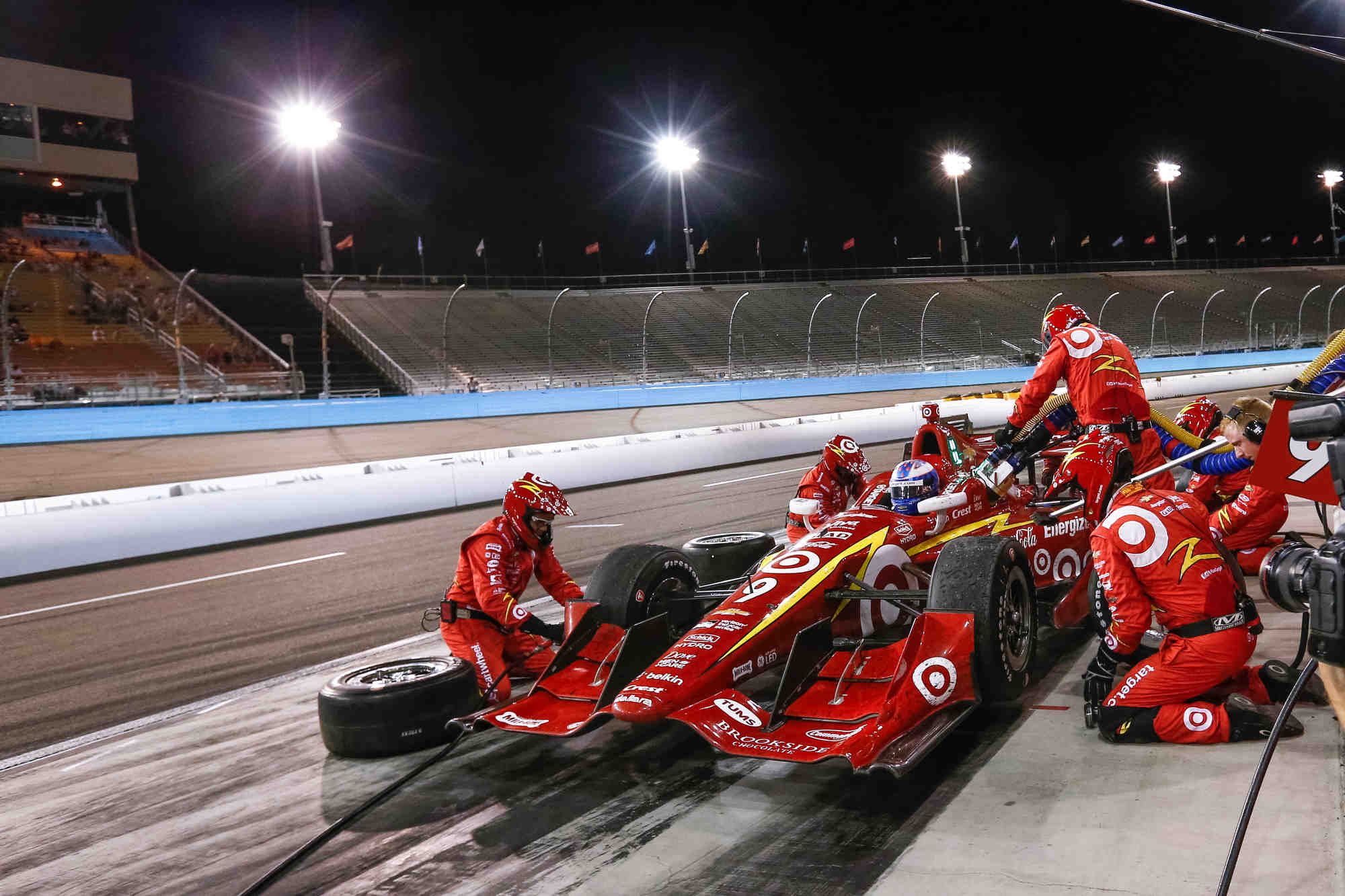 From an entertainment standpoint, it won’t go down as a classic. By virtue of some trademark pit work from the No. 9 Target Chip Ganassi Racing squad and the misfortune of Team Penske drivers Helio Castroneves and Juan Pablo Montoya, both of whom sustained flat right front tires while leading, Scott Dixon took the lead on lap 96 of Saturday evening’s Desert Diamond West Valley Phoenix Grand Prix.

From there, no one was able to mount a serious challenge to the four-time and reigning series champion, who would go on to earn his 39th career Indy Car victory in the Verizon IndyCar Series’ much-anticipated return to Phoenix International Raceway.

I long ago ran out of superlatives to describe Dixon. If you want to read my opinion on the stupendous Kiwi, see this article from 2012. It’s just as relevant now as it was the.

The racy one-mile oval in Avondale, Arizona of course boasts a rich American Championship Racing heritage. In fact, PIR sits third behind Indianapolis and Milwaukee on the all-time list of Championship races at a given track.

Although early crowds after the track opened in 1964 were modest, PIR quickly became one of the favorite and most successful stops first on the USAC Championship Trail, then later the CART World Series. By the mid-1990s, CART was regularly drawing in excess of 60,000.

In 1996, the racing landscape began to change. PIR cast its lot with the Indy Racing League at the onset the CART-IRL war and the track would be acquired by International Speedway Corporation the following year. Over the next decade, as American open-wheel racing steadily diminished in stature and NASCAR simultaneously grew to never before seen heights, the crowds at PIR began dwindle. A meager showing of 8300 announced for the 2005 IRL race combined with the addition of a second annual NASCAR Sprint Cup Series race that same year, proved to be the nail in the coffin for a once-annual staple of Indy Car racing.

That was until Saturday night.

All things considered it was a decent, if not spectacular return to PIR. An announced crowd of 20,000 (which I expect is inflated) was on hand to witness the first IndyCar race in over a decade. The hope, of course, is that the race will continue for many years going forward. However, if this is to be the case, some changes need to be made. And to illustrate this, we will start with one of the great lessons of the early 2016 racing season.

Let me be clear: Saturday evening was not a disaster a la Richmond 2009. It was however, very processional, to the point where the leaders were unable to pass lead cars. If IndyCar is going to create a viable sustained event at Phoenix, the show must be better than it was Saturday. And if anyone is listening I’ll offer a little advice.

We’ve seen it in NASCAR, where the early season racing has been a significant improvement in my opinion. Further, everyone in the paddock this weekend at Phoenix knew the high down force level on the cars was likely to make the race processional. And aside from a few bold outside moves by Ryan Hunter-Reay (we’ll get to him) on restarts, this proved to be true.

As far as the down force equation goes reversing course in this regard would of course be somewhat counter to the general direction of Indy Car racing over the past few decades (bigger wings, less horse power, aero kits, etc.).

To make a long story short, the combination of diminished horsepower and greater aerodynamic grip has lessened the differential between cornering speeds and straightaway speeds. While this is less of a concern at tracks like Auto Club Speedway, which has 5 distinct grooves, or Iowa, which is a two-groove track in part because of its progressive banking, Phoenix is a one-groove track.

Now, I’m not saying that’s bad, as Phoenix has long produced entertaining Indy Car racing. I AM SAYING the series needs to adjust to the layout. We saw Saturday passing, although not impossible, was very difficult. The best way to fix this in my opinion is to create more of a differential between straightaway and cornering speeds.

Also, the added benefit of less downforce is we will see the drivers really hustling the cars. This has been apparent so far in NASCAR this season at tracks such Atlanta and Las Vegas, where the drivers have been visibly on edge.

While my hope is the series pursues this course on a macro-level and not just at Phoenix, it is imperative they do so for the Phoenix event. Yes, we hope Saturday was a decent start to rebuilding what should be a cornerstone event moving forward. But that will only happen if the clear lessons of Saturday evening are heeded.

I mentioned the sublime driving of Ryan Hunter-Reay earlier. While he is a threat to win anywhere, RHR is a particular master of the bull rings boasting three wins at Milwaukee, three at Iowa and one at Loudon. Despite the woeful performance of Honda this past weekend (we’ll get to that), RHR with his bold outside passes on restarts was THE SHOW Saturday at Phoenix.

Unfortunately, for Hunter-Reay, two ill-timed cautions meant his efforts only resulted in a 10th place finish. It seems Hunter-Reay’s aggression meant he had to burn up fuel quicker than the opposition. He would pay dearly for that on two occasions.

Now, I’ll admit that I am perhaps as guilty of what follows as anyone. However, I find Hunter-Reay’s achievements are woefully taken for granted by many even within IndyCar. In a sport that is crying out for American stars, compelling storylines of drivers battling their way to the top level despite major setbacks, and heroes willing to lay it on the line in pursuit of victory, RHR checks every one of those boxes and more.

Now, he’s doesn’t have the outgoing personality of James Hinchcliffe, Helio Castroneves or Tony Kanaan. But a lot of the things I’ve heard people say IndyCar NEEDS over the past few years, it very much HAS in RHR. And I hope people take a moment to appreciate that.

Hunter-Reay’s performance Saturday would have been notable whatever car he was driving. But the fact it was a Honda, made it even more impressive.

I’m not breaking any news in saying that Honda remains behind Chevrolet in the performance department. While the Japanese marque was given the ability to improve their aero performance this off-season, the deficit to Chevrolet remains. In Phoenix despondency seemed to set in as the Honda teams realized they are in for a uphill battle with the aero kits homologated for 2016. As Bryan Herta told me all that has essentially been homologated is a competitive advantage for one manufacturer and disadvantage for another.

A team principal-type told me he expected the Chevy-Honda disparity to be worse with the Speedway kits.

Another team principal perhaps summed it up best, and I’m paraphrasing “are we competing or not? If it’s a competition, then let us compete; if not just go to spec body kits."

Of course, the aero kit frustration is not merely confined to the Honda camp. Roger Penske, for one, has expressed a desire to ditch the kits going forward. And one team member said to me, “you know, it will be interesting to see what happens, if all the owners just say ‘we’re not paying for these things’."

With the 100th Indianapolis 500 on the horizon, I imagine any serious opposition to the kits will be beneath the surface. However, I can imagine this issue boiling over in the summer months, particularly when teams start making their plans for 2017.

Because I was quite busy at PIR during the weekend, I didn’t see the Formula E Long Beach race until I returned home. However, I could have predicted another race with another self-inflicted wound from Sebastien Buemi.

Since the start of the Formula E season last fall there has arguably been no driver in major motorsports faster than Buemi. But also there has been no driver more needlessly aggressive and mistake prone.

At the risk of repeating myself: The Swiss while very quick seemingly lacks the temperament one would associate with a championship driver. He is often agitated in radio messages to his team, and we saw in Long Beach a mistake one would expect from a junior level driver as he needlessly ran into the back of Robin Frijns at Long Beach hairpin of all places.

Now, given his speed and ability to dominate a weekend, the 22-point deficit to Long Beach winner Lucas di Grassi is a more than manageable deficit. Still, we are to be witnessing a driver mentally unraveling, something you hate to see.

For Buemi’s sake I hope he gets it right over the next five races. He is clearly the class of the Formula E field. However, unless there are significant changes in his approach soon, this will be a championship season lost for the Swiss.

I’ve pointed out previously when track staffs are less than friendly, such as we see annually with the arrogant Yellow Shirts at IMS. I did see one unfriendly exchange with a track staffer and a fan, but generally I found the staff helpful, welcoming, and energetic about making the event work. So, kudos to Bryan Sperber and the team at PIR.

Also, for what it’s worth, I saw more promotion for the event in the surrounding area than I do at usual IndyCar events. So, from all indications, PIR is trying to make the event work.

If you are attending the Toyota Grand Prix of Long Beach, look for my article in the race program previewing the IndyCar season. Thanks to Jim Michaelian, Chris Esslinger, and the Grand Prix staff for again including me as part of their world-class event.

Brian Carroccio is a columnist for AutoRacing1.com and a credentialed member of the NASCAR Sprint Cup Series and Verizon IndyCar Series media. He can be contacted at BrianC@AutoRacing1.com