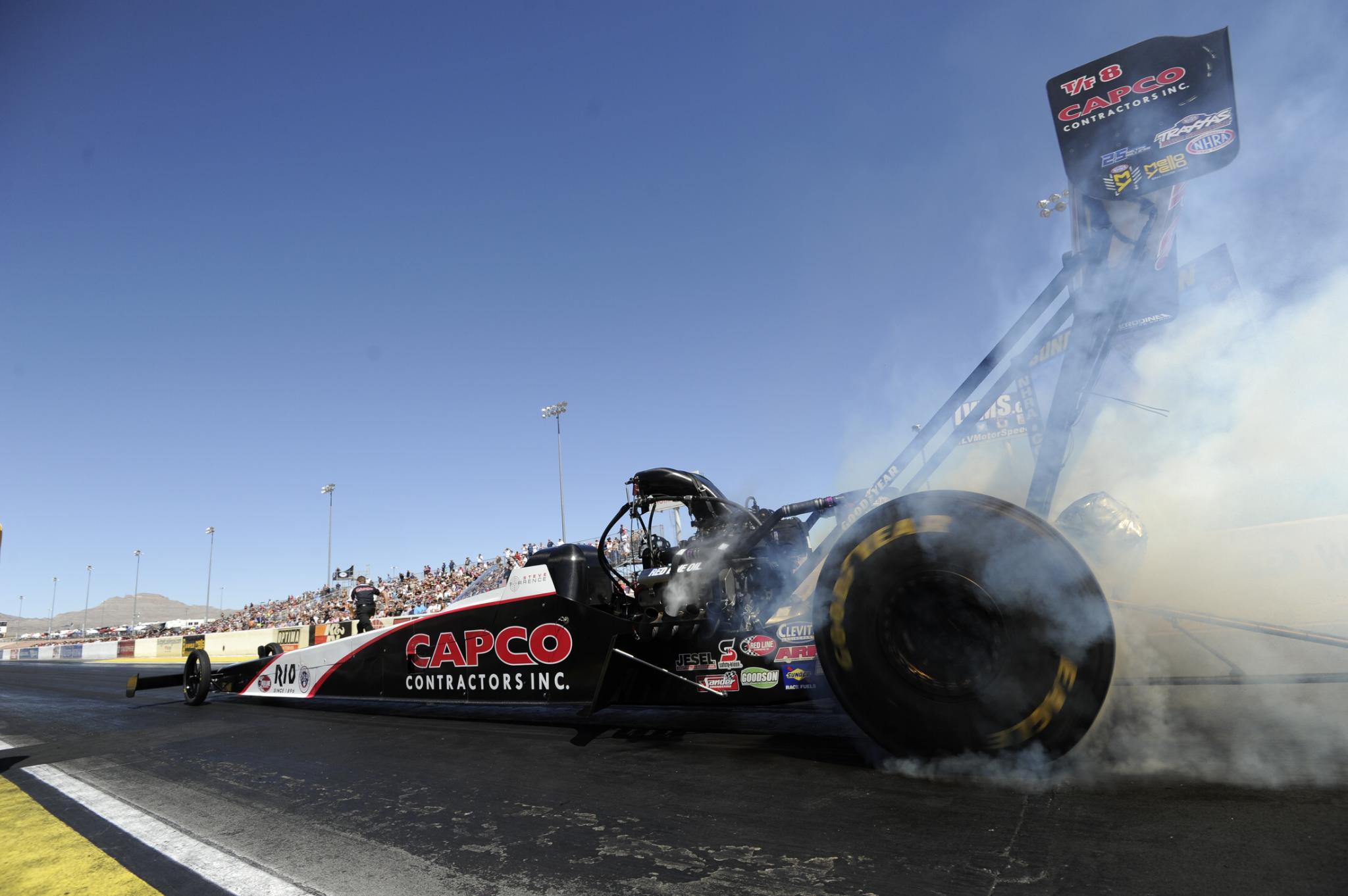 Torrence, who had the quickest car in each session, has had a hot start to the season as he was the No. 1 qualifier at the Winternationals and went on to earn the Wally at the season-opening Pomona, Calif. race in February.

[adinserter name="GOOGLE AD"] "To come out here to Vegas and to have that much of a dominating performance through qualifying is huge for our confidence going into tomorrow," said Torrence, who will meet Steve Chrisman in round one. "I feel like we have a really good race car. Every run was pretty unbelievable. The car has just been flawless."

Doug Kalitta powered his Mac Tools dragster to a 3.732 at 327.19 for the second qualifying spot and will meet Steve Faria in the first round. Defending world champion Antron Brown took the third qualifying spot with a 3.760 at 319.45 in his Matco Tools dragster and will open against Scott Palmer. Still riding momentum from her first Top Fuel victory at the recent Gatornationals, Brittany Force qualified fourth with a 3.768 at 316.90 in her Monster Energy dragster and will pair with her final round foe from Florida, Terry McMillen.

With his track record elapsed time of 3.916 at 322.88 in his Infinite Hero Dodge Charger, Beckman claimed his third No. 1 qualifier of the season in Funny Car, 18th of his career and first at LVMS. Beckman will race Terry Haddock in the opening round.

"I'm more than satisfied," Beckman said. "We've qualified No. 1 in two different cars this year. I think that's a testament to the DSR chassis shop and to (crew chiefs) Jimmy (Prock), John (Medlen), Chris (Cunningham) and the Infinite Hero guys."

Courtney Force qualified second, piloting her Traxxas Chevy Camaro SS to a 3.928 at 326.08 and will face Bob Bode. Force Racing teammate and Gatornationals winner Robert Hight qualified third with a 3.935 at 325.37 in his Auto Club Chevy Camaro and will meet Jeff Arend in the first round. Ron Capps, a five-time Las Vegas winner and currently second in points, failed to qualify for the race in his NAPA Auto Parts Dodge Charger.

Pro Stock points leader Line qualified in the top spot for the second time this season with his run of 6.687 at 205.98 in his Summit Racing Equipment Chevy Camaro from Friday's second qualifying session. This is Line's second No. 1 qualifier of the season, third at this event, sixth at the track and 43rd of his career.

"It's a great car right now," said Line, who will race Matt Hartford in round one. "We have a great shot to win the race, no question about that. It drove well this weekend, very well for me. Certainly I was excited to try and win the K&N Horsepower Challenge, but it's a good swift kick and it knocks the wind out of you a little bit, and it's a good motivator for tomorrow."

Line and Anderson have combined to win the first three NHRA Mello Yello Drag Racing Series events. Anderson won the Winternationals and the Gatornationals, while Line picked up the victory in Phoenix. Anderson qualified second and will try to sweep the race when he opens with Joey Grose. KB racing teammate Bo Butner took the third qualifying spot with a 6.693 at 205.41 in his Jim Butner Auto Chevy Camaro and will meet veteran driver V. Gaines in the first round.

Defending world champion Erica Enders, who has won the last four races at this track in the past two seasons, will meet Aaron Strong in the first round as she tries for her fifth consecutive win here.