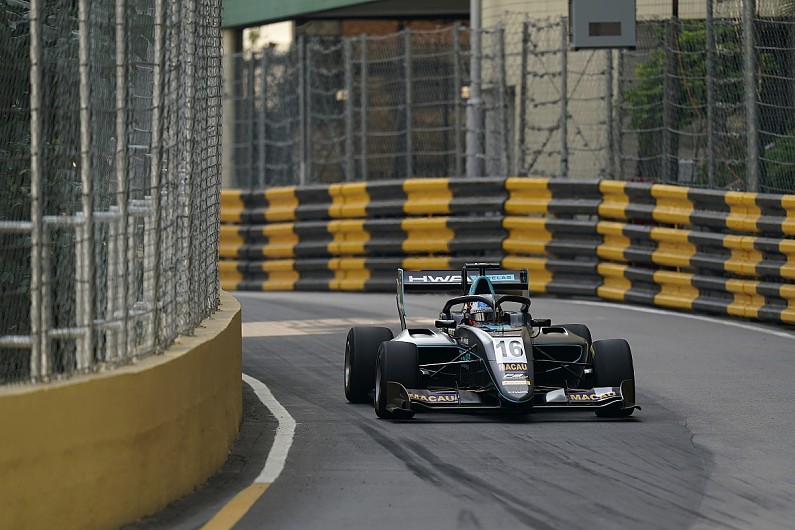 The Briton smashed this morning's unofficial lap record in the process of topping the session, his 2:06.793 time now the fastest ever Formula 3 lap around the Guia circuit.

It was Marcus Armstrong who set the early qualifying pace, a 2:10.154 putting him a tenth clear of SJM Prema Theodore Racing teammate Robert Shwartzman after the first representative runs.

On 10 minutes the session was stopped for the first time, Enaam Ahmed bringing out the red flag thanks to a trip down the Lisboa Bend escape road.

The restart was followed by a wave of improvements, with Shwartzman leading the way as times dipped into the 2:08s. But the green running was brief, Lisboa Bend striking again as Max Fewtrell hit the outside wall to spark a second stoppage.

Once again, the restart brought a new benchmark, JÃ¼ri Vips charging to the top with a 2:06.943. But the Estonian's stint at the top was brief, Jake Hughes banking the time that would ultimately top the session minutes later. At the same time David Beckmann slipped into second, his time just 0.05s short of Hughes and less than a tenth faster than Vips.

With five minutes to go there was another stoppage when Olli Caldwell's Trident Motorsport entry rolled to a stop on the way out of Fishermen's Bend. But this time there was no improvement from the restart, a run of yellow flags, and a final red when Yuki Tsunoda hit the wall at Maternity Bend, helping Hughes' lap remain unchallenged.

Armstrong ended up fourth behind Vips, the Kiwi struggling with traffic throughout the session. Logan Sargeant was an impressive fifth, followed by two-time race winner Dan Ticktum and Callum Ilott.

Frederik Vesti was eighth quickest, with Shwartzman left in ninth after a bad run with yellow and red flags, and an out-lap spin on his final run.