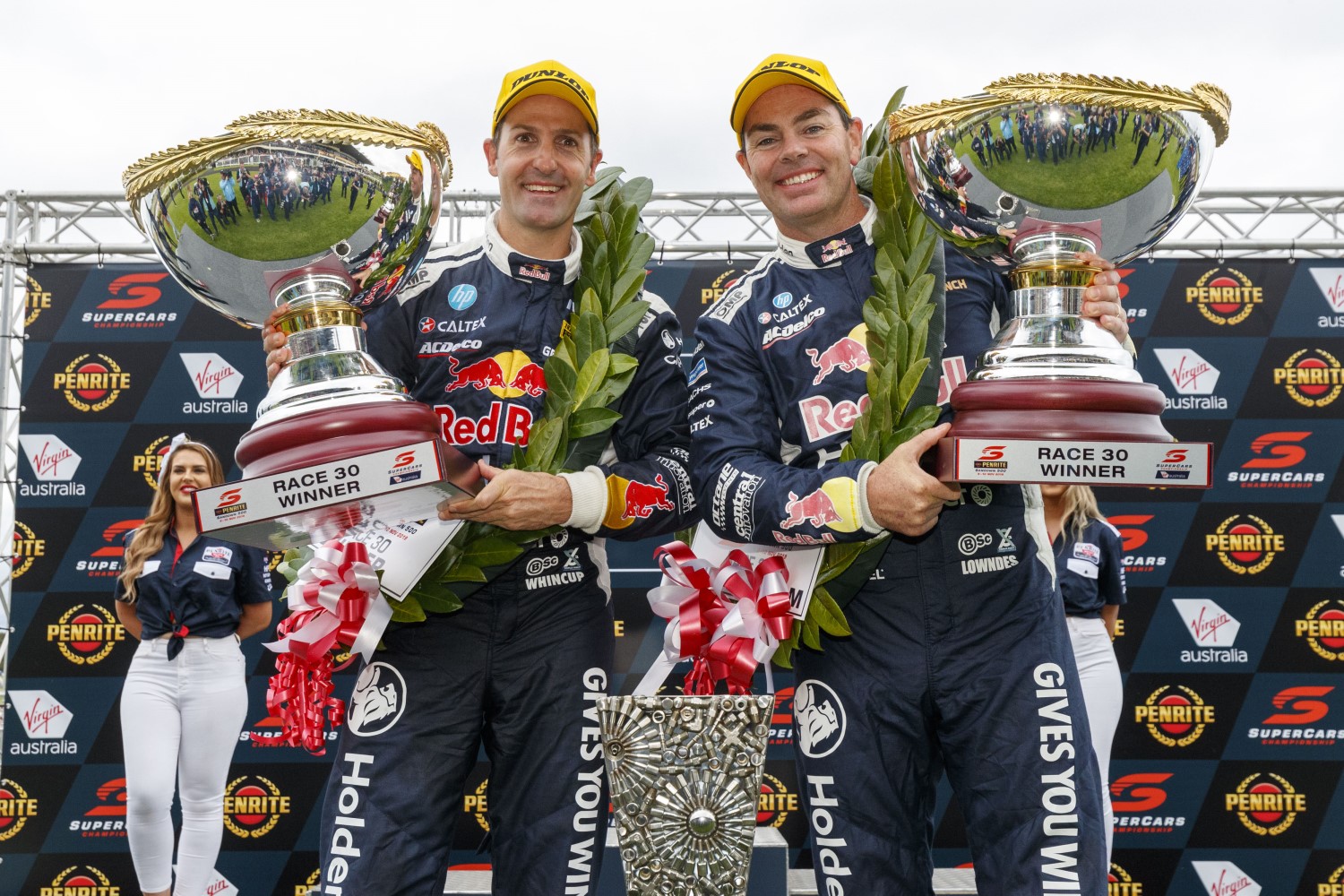 The great Craig Lowndes and Jamie Whincup won today's 500km race and claimed the PIRTEK Enduro Cup, while McLaughlin finished ninth after being relegated to the back of the grid for its controversial Bathurst illegal engine.

Whincup felt for his Red Bull teammate Shane van Gisbergen who's day ended with a rear tire problem after leading the race.

"Commiserations to #97 – they did a great job today – but at the same time, we’ve been on the receiving end of the same thing plenty of times so we’ll certainly take it," Whincup said.

"Big thanks to CL (Lowndes) because he’s done an amazing job for the whole season of endurance."

McLaughlin's 9th place finish ensured he heads to next week's season finale in Newcastle with an unassailable points lead over Shane van Gisbergen meaning he is this year's Supercars Champion.

"It’s been a pretty tough month – obviously some things have happened and we’ve just pushed on as a team. I’m so proud of everyone," McLaughlin said.

"I don’t want to take away from Jamie and their team, they’ve done a great job all weekend.

"Right now we’re subdued because we’ve got another one and we really want to win that one and it’s nice to roll in to Newcastle with a full head of steam and be somewhat relaxed about it.

"It’s been an awesome ride all year and I’m really proud of it all.

It was Whincup and Lowndes' first Penrite Oil Sandown 500 win together in 12 years. It was also Lowndes 6th win at Sandown and Whincup's 5th. Whincup also won last year's endurance race in Melbourne.

Behind the #888 Red Bull Holden on the podium was Chaz Mostert and James Moffat who finished 3nd on James' father Allan Moffat's 80th birthday.

"It was so good, I was tearing up with about 6 to go and I was saying to myself come on and pull it together," Holdsworth said.

After starting 24th – due to a van Gisbergen DNF in the second Saturday sprint race – Garth Tander ran longer than the majority of co-drivers as he blitzed through the field, making up 22 places in 72 laps before jumping out.

Van Gisbergen emerged from his own pitstop two laps later with a 10-second buffer, but just as a third straight Red Bull one-two finish loomed, van Gisbergen’s Commodore gave way to a problem with a rear tire.

The 2016 champion tried to carry on before having to give up the fight with 10 laps remaining, pulling into the pits for repairs that would ultimately put him two laps down.

Among the fast starters was Jake Kostecki, who rose to fourth before enduring an eventful run of events.

The 19-year-old collided with Luke Youlden, bumping the Penrite Holden wide, then had contact with Chris Pither upon exiting his pit bay, and finally rubbing panels with Michael Caruso, whose Monster Energy Mustang was damaged after bouncing off the wall.

The championship now heads to Newcastle for the series finale, the Coates Hire Newcastle 500, featuring a concert by KISS and The Screaming Jets across November 22-24.