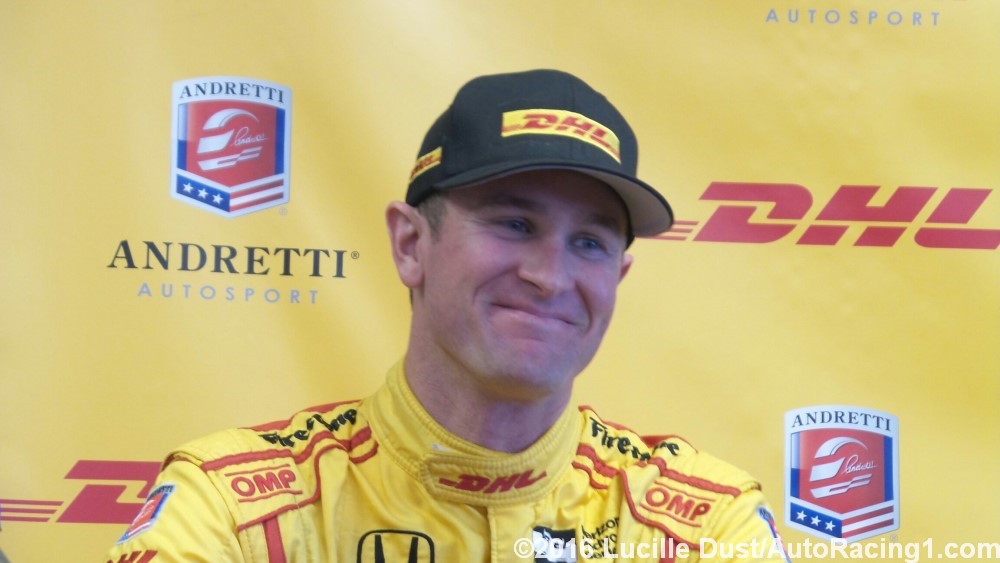 The Hunter-Reay/DHL part of this rumor is now 'fact'. They just announced that DHL will sponsor Ryan Hunter-Reay through 2020 – a 4 year deal. Very significant.

9/18/2016 The commitment that DHL / Andretti / RHR are making to each other is extraordinary in IndyCar. It bodes well for IndyCar (DHL is #108 on Fortune 500 Global List!, involved heavily in F1, & Sports) for them to make the type of commitment this far in advance is a very strong vote of confidence in IndyCar as well as AAS and Hunter-Reay to deliver real ROI on and off the track.

9/17/2016 – According to AR1.com sources, Andretti Autosport is making a very substantial announcement Sunday – and after they do we don't think anyone in the paddock will be able to claim the long term stability of their #28 entry (other than Roger Penske who has the financial ability to buys wins) or the teams acknowledgment (or commitment) to Hunter-Reay to their recent, or future success. Announcement will be significant, and positive, for IndyCar, Andretti & Hunter-Reay. Mark C. reporting

9/17/2016 AR1 spoke with many drivers this weekend that are looking for future rides. Oriol Servia, Tristan Vautier, JR Hildebrand and Gaby Chaves have all been walking around working on a deal. There are not many rides to be had since we only have so many seats to fill. Lucille Dust reporting from Sonoma

Schmidt Petersen Racing will likely retain James Hinchcliffe and Mikhail Aleshin for next season. Aleshin has stated that he loves the level of IndyCar competition over Formula One, where you already know who is going to win. He has twice been close to winning this season, first at Mid-Ohio, where he lead the most laps until an incident in his final pit stop cost him the victory and then at Pocono, where he won the pole but finished second. Schmidt expects Aleshin's sponsor SMP to return for the 2017 season. And whenever Schmidt has asked for an increase in the budget, they have complied.

Also overheard is that team owner Sam Schmidt may expand to a third car because Hinchcliffe's primary sponsor, Arrow, is considering funding a second car. Arrow has created a specially equipped car for Schmidt, who is a quadriplegic after a devastating testing crash in 2000 in Orlando, Florida. Arrow's technology has allowed Schmidt to drive a passenger car over 60 MPH controlled solely by his head movements. Arrow Electronics is an American Fortune 500 company that specializes in distribution and value added services relating to electronic components and computer products.

We have also heard that Schmidt has contacted Derrick Walker about purchasing his race shop in Indianapolis. When Walker "resigned" as IndyCar's President of Competition and Operations in 2015, he stated that he had unfinished business with IndyCar and desired to return to the series at the team level. Schmidt may also need Walker to help manage the team should his team expand to three cars.

If they expand to three cars, we are not sure who the potential driver would be. Maybe one of his current Indy Lights driver might move up. Lucille Dust reporting for AR1.com