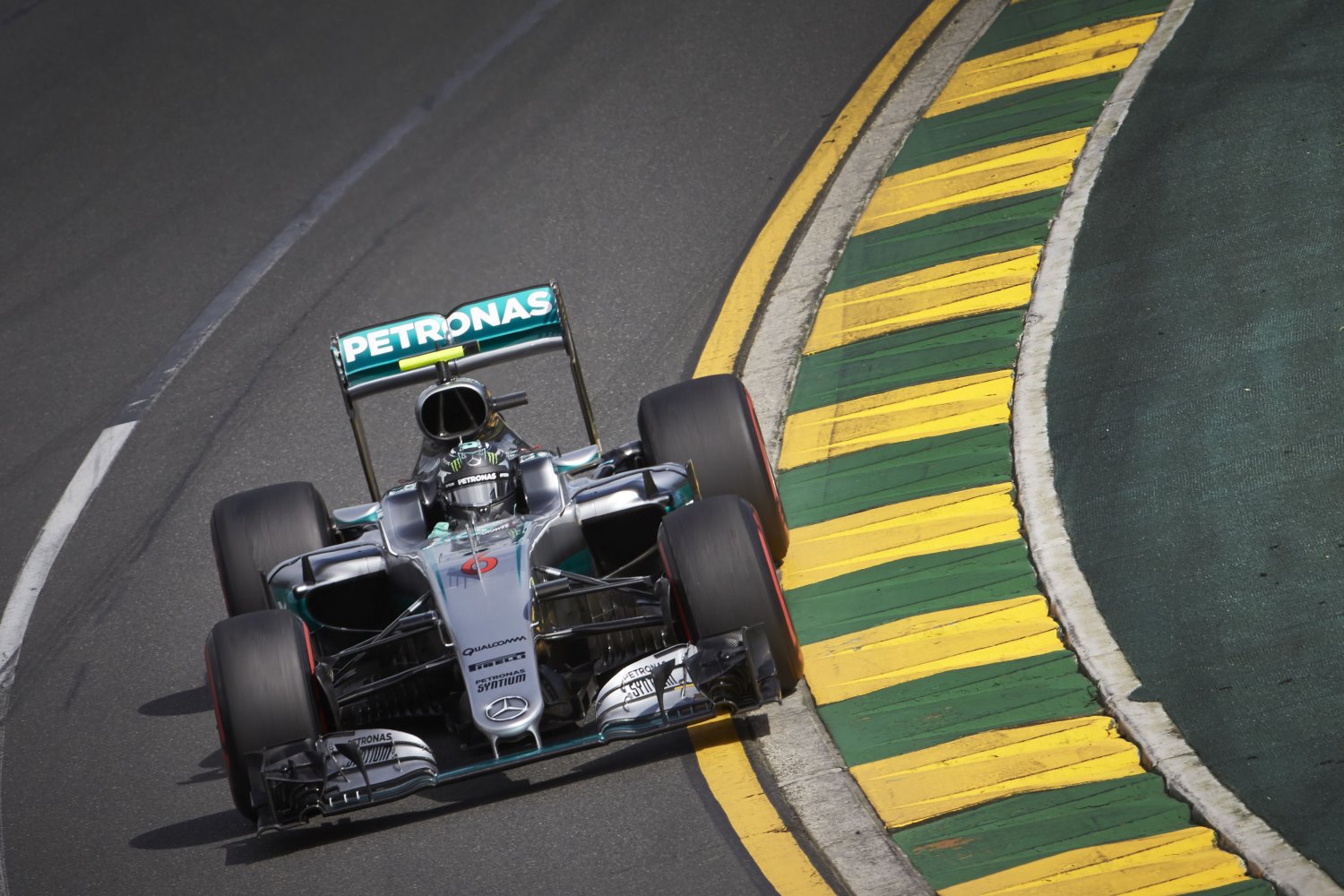 Continuing his hot streak from the end of 2015, Nico Rosberg won the 2016 Australian Grand Prix as Ferrari and Sebastian Vettel saw its victory hopes dashed by poor tire strategy.

Ferrari snatched the lead from Mercedes at the start, with Sebastian Vettel jumping from third to first, ahead of teammate Kimi Raikkonen and Rosberg, while polesitter Lewis Hamilton fell to sixth after running wide at turn one.

However, just as Vettel appeared to be in control, a huge accident for Alonso on lap 18 forced the race to be stopped. More on the below.

At the restart, Vettel was on super-soft tires, with Rosberg on mediums, which meant Vettel would have one more stop to make. Vettel was unable to build enough of a gap so Rosberg simply assumed the lead on lap 34 when Vettel pitted and nursed the car to the end.

[adinserter name="GOOGLE AD"]A charging Vettel on super-soft tires couldn't force a mistake from Hamilton as he charged forward from his extra stop. However, with his softer tires wearing, the Ferrari driver ran wide with three laps remaining as he tried to overtake Hamilton. His chances blown, a frustrated Vettel tried to re-catch Hamilton but ran out of laps and had to settle for 3rd.

"We went for the aggressive route," said Vettel.

"Maybe with hindsight we could have done something else, but I don't want to blame anyone. It's a shame the other car (Kimi Raikkonen) didn't make it but it is positive.

"The team is in good shape, we know we can up our game and put pressure on these guys.

"You can argue the red flag didn't help us, but once it plays into our favor and then catches you out."

"Definitely we were a lot closer than last year," he said. "This was one of our worse tracks. We expected to be stronger in qualifying, that wasn't the case as we had a bit of a rough session.
"Today was a lot better for us.

"We are on the right track and things are coming together. All in all we are a lot closer so plenty of positives."

Daniel Ricciardo was fourth for Red Bull on home soil, while Felipe Massa was fifth for Williams.

In a stunning performance, Romain Grosjean scored a remarkable sixth place for Haas, the red flag allowing him to get away with just one tire change all race, with his pace proving enough to keep Nico Hulkenberg at bay.

Fernando Alonso walked away from a frightening crash following a collision with Esteban Gutierrez on lap 18 of 57 that brought out the red flag.

The McLaren driver clipped the left rear of the Haas at high speed as they reached the braking zone into Turn 3 and then hit the wall on the left hard. That impact turned Alonso sideways and he went into the gravel trap sideways at high speed.

The McLaren went into a series of airborne barrel rolls before hitting the wall hard at the right edge of the gravel trap.

Alonso was able to climb out of the car unaided with Gutierrez, whose car also spun into the gravel, running over to see if the Spaniard was OK.

"I feel good," said Alonso. "Obviously I'm trying to put everything in place again in my body. It was a big, big crash.

"I tried to take the slipstream of Gutierrez into the braking point, and it was a combination of factors that we ended up with a crash.

"I'm thankful for the safety of those cars and that I'm alive talking to you. This is the most important thing."

"It's a racing incident.

"We both tried to fight and sometimes we forget that we are at 300km/h and every little crash can be much bigger.

"It's disappointing because we start the championship with zero points and we've probably damaged the power unit so we have to take the second one immediately – but that's not the most important thing."

Gutierrez said his only concern had been that Alonso was alright.

"Thankfully we are alright. It was a very, very scary moment," he said.

"The first thing I saw in the mirror, I was really worried.

"I jumped out as quick as I could and ran to him. It was a really big relief he was OK.

"We didn't speak much. It was a real moment of shock for both of us. I just went to him to see if everything was fine with him.

"I was aware he was behind. I braked into Turn 3 and everything came by surprise at the rear.

"I need to see the video to understand what happened."