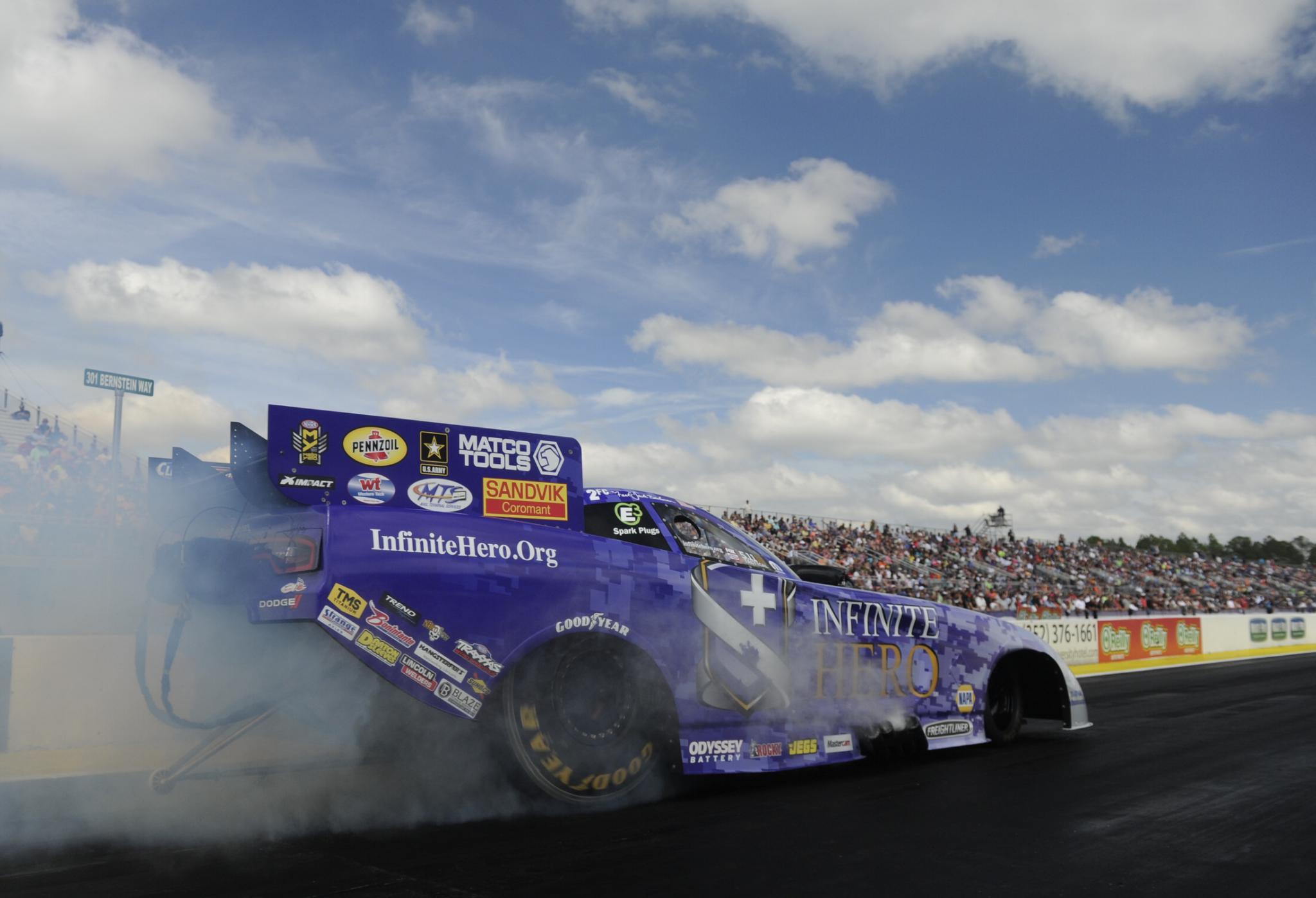 Jack Beckman set a national record and raced to the No. 1 qualifier in Funny Car at the 47th annual Amalie Motor Oil NHRA Gatornationals on Saturday.

Beckman posted a 3.879-second at 329.26 mph sprint in his Infinite Hero Foundation Dodge Charger R/T to reset the elapsed time national record and become the No. 1 qualifier. His time was a Gainesville Raceway track record. He has 17 No. 1 qualifiers in his career and two so far in 2016. This is his first No. 1 at Gainesville Raceway and he will hope to secure his first win at the facility tomorrow. Beckman will open eliminations against Jeff Diehl.

[adinserter name="GOOGLE AD"] "I'm always excited to come here," said Beckman. "This place was setting records long before I ever came out here when I was reading about it in National Dragster. Driving for (crew chief) Jimmy Prock, we can set records most places we go."

Courtney Force qualified second in her Traxxas Chevrolet Camaro SS with a 3.893 at 322.96. Force will open eliminations against Dave Richards. Her John Force Racing teammate, Robert Hight, pushed his Auto Club Chevrolet Camaro SS to a 3.921 at 327.43 to qualify third. Hight will face Terry Haddock in Sunday's first round.

Phoenix winner Tim Wilkerson will enter eliminations as the fourth qualifier and race Cruz Pedregon. Pomona winner Ron Capps is fifth and will meet John Hale in the opening round.

Crampton powered his Lucas Oil dragster to the fifth-quickest Top Fuel pass in NHRA history with a 3.698 at 317.42, earning his first No. 1 of 2016, fourth of his career and first ever at Gainesville Raceway. Crampton, a South Australia native, will open Sunday's eliminations against Chris Karamesines.

"We struggled a bit yesterday and we were looking forward to the overcast conditions today because we didn't know what (crew chief) Aaron Brooks could do when the weather was like that, with a cool track temperature," said Crampton, the 2014 Rookie of the Year. "To do what we did in the first qualifying session today and then run a 3.6 was very cool. Hats off to Aaron Brooks and my Lucas Oil guys."

Clay Millican raced to a 3.722 at 326.71 in his Parts Plus / Great Clips dragster to qualify second. Millican was the runner-up in Gainesville in 2013. He will face Ike Maier in Sunday's first round.

Defending Top Fuel world champion Antron Brown pushed his Matco Tools dragster to the No. 3 spot with a 3.729 at 318.54. The 2013 Gainesville event winner will battle Terry McMillen in the opening round of eliminations.

Phoenix winner Leah Pritchett is fourth and will meet Tripp Tatum in the first round, while Phoenix runner-up Brittany Force is fifth and will race Morgan Lucas.

In Pro Stock, Line raced his Summit Racing Equipment Chevy Camaro to the No. 1 qualifier with a 6.584 at 208.84. Line, riding momentum from his recent win in Phoenix, has 42 No. 1 qualifiers in his career. After a first round bye, Line will meet the winner of Shane Gray versus Vincent Nobile in the second round.

"We made good runs," said Line, a four-time Gatornationals winner. "We struggled a little bit with the race car but my Summit hot rod is pretty fast right now. My car has been very good and that's probably one of the reasons she's been a little faster than everybody else's. We fell a little bit short but still had very good runs today and I'm very happy about that."

Line's Ken Black Racing teammate, Bo Butner, pushed his Jim Butner Auto Chevy Camaro to the No. 2 qualifier with a 6.591 at 209.26. Butner will open Sunday's eliminations against V. Gaines. Greg Anderson, the third member of the Ken Black Racing team, qualified third with a 6.595 at 209.65 in his Summit Racing Equipment Chevy Camaro. The defending event winner will go up against Matt Hartford Sunday morning.

[adinserter name="GOOGLE AD"] Krawiec posted a 6.801 at 196.42 on his Screamin' Eagle Vance & Hines Harley-Davidson to become the No. 1 qualifier at the first of 16 Pro Stock Motorcycle events in 2016. Krawiec has 28 No. 1 qualifiers in his career and two at Gainesville Raceway. He has won this event three times and was the event runner-up one year ago. Krawiec will face Michael Phillips in the first round of eliminations.

"You want to get back on that motorcycle," said Krawiec, a three-time world champion. "Definitely wanted to come out here to Gainesville, blow the dust off, get the cobwebs behind me and start moving forward. The key yesterday was making a good lap off the trailer and setting the tone for the weekend. Anybody could win. Every round is important and every round you have to do your best."

Hector Arana qualified second with a 6.821 at 197.10 on his Lucas Oil Buell and will go up against Mike Berry in Sunday's opening round. Chip Ellis posted a 6.829 at 195.34 on his Junior Pippin Trucking Company Buell to qualify third. Ellis will battle Hector Arana Jr. in the first round.

Eliminations at the Amalie Motor Oil NHRA Gatornationals will begin at 11 a.m. on Sunday.