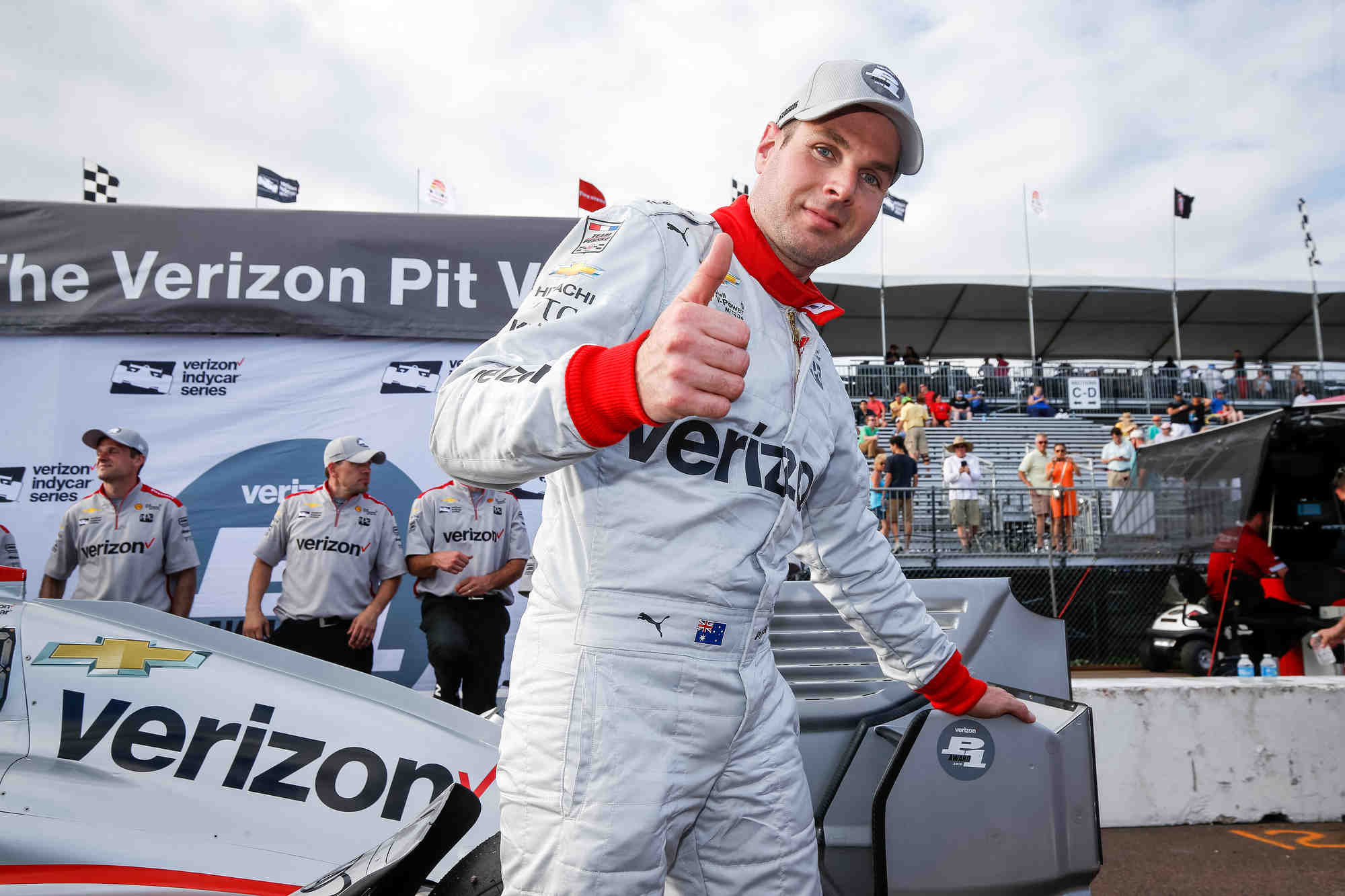 Well, the first race of the 2016 Verizon IndyCar Series is in the books. As they did in 2015, Team Penske swept the top-four qualifying positions. And as he did in 2015, Juan Pablo Montoya edged a Penske teammate to secure victory.

Of course, the biggest story from St. Pete was not Montoya or the sterling form of Team Penske. No, the story of St. Pete centers on a Penske driver that didn't race. And it is here where we will begin our St. Pete Postscript.

So, what the heck happened with Will Power?

What follows is not so much a commentary, rather a piecing together of the events that transpired at St. Pete and early this week with regard to Power. Forgive me in advance for the lengthiness which follows. However, given this is a medical issue, I will error on the side of detail and context rather than brevity.

As you likely know, 2014 series champion Will Power qualified on pole Saturday before the the team announced Sunday morning that Power was battling nausea and Oriol Servia would take his place in the #12 Verizon Team Penske Chevrolet for the race.

[adinserter name="GOOGLE AD"]While it was known during the weekend that Power was battling an illness, a complicating factor was the Aussie's crash in Friday morning's practice. The Penske statement announcing Servia made no mention of the crash. However, speculation as to what degree the crash and/or illness played and to what degree they may or may not have been related began. In particular, it was thought Power may have a concussion.

Now, Power was evaluated at the scene of the crash Friday, cleared and released to drive. Further, the telemetry data from Power's crash registered a G-force level below the threshold for which a concussion is typical.

Also, after the crash, Power would go on to post fast time not only in Friday afternoon practice but Saturday practice, and the first two qualifying sessions, before securing his 43rd career pole position in the Firestone Fast Six. Call me crazy, but it's hard to imagine a concussed driver leading FIVE consecutive sessions. Whatever was ailing Power clearly didn't seem to be affecting his driving.

It was after winning pole, however, when things began to appear somewhat amiss. After getting out of the car, Power gave a rather disoriented interview which would have certainly lent credence to the idea he sustained a concussion. Visibly showing signs of ailing, Power skipped the post-qualifying media session. And when noticing his symptoms, INDYCAR mandated another concussion test. Sunday morning, Power was diagnosed with a mild concussion by INDYCAR Medical Director Geoffery Billows, and placed into the series' concussion protocol.

Now, this was speculated by some, but not yet known. And it would be easy to assume at this point Penske and/or INDYCAR were in ‘cover their ass' mode. After all, if a concussion had been sustained (remember they didn't reveal this in the Servia announcement) then the team and series had put a concussed driver in the car for FIVE sessions. Whether that happened knowingly or unknowingly, it most certainly would have invited an avalanche of questions neither the team nor series was ready to answer an hour before their season opener.

Instead, it wasn't until during the race that a statement came from INDYCAR saying Power sustained a mild concussion and that Power was in INDYCAR's concussion protocol. While this assessment was later deemed false (we're getting to that), it indicated at the time that Power had driven five sessions with a concussion. Scary stuff!

And there were still questions. Why weren't concussion symptoms determined Friday? And if INDYCAR's baseline concussion testing doesn't in fact adequately determine if a driver has a concussion, then isn't there a cause for concern?

Earlier this week, Power underwent extensive medical testing at the University of Miami's concussion program under the surveillance of doctors specializing in concussions. Those tests determined Power showed "no evidence of a recent concussion." Power has been cleared to drive.

So, we have a driver who showed the symptoms of a concussion, and was held out from a race because of that diagnosis, yet didn't actually have a concussion? Yes, that would seem to be correct.

Fundamentally, this poses a problem, according to Dr. Terry Trammel, INDYCAR Safety Consultant.

"The presumption when a driver has had an impact is that anything that's wrong with him was a result of that impact."

But again according to Trammell SCAT does not take into account,

"If you have some abnormality (emphasis mine) to start with, what we would called compounding factors or compounding variables, those are not taken into account. The effect that they have is not taken into account by the test. It simply assumes that all of your symptoms are from a concussion…So now you have a driver that's nauseated, has a balance disturbance, vertigo, headache, can't concentrate very well, and you have him take the SCAT test, which he'll now fail.

Bingo! Power failed the SCAT due to his inner ear infection. According to Trammell, the symptoms of the inner-ear infection — dizziness, vertigo, loss of concentration — meant it was inevitable Power would not pass the SCAT.

So, what's the takeaway from all this?

Well, to repeat, Sunday evening we were led to believe a concussed driver had driven five sessions due to a misdiagnosis. Thankfully, as it turned out the opposite was true: a non-concussed driver was held out due to concussion-like symptoms that didn't arise from a concussion. And while Power likely would have sat out Sunday anyway, the fact an error (only in the sense of a misdiagnosis) was made on the other side is reassuring; as is the fact, the University of Miami's findings square with the assessment INDYCAR gave at the scene of Power's crash Friday.

Also, despite the fact Power was not concussed, it does appear that his cognitive capabilities were compromised. While he still performed at a high-level, the series and teams must protect its drivers from themselves and others. With Power's cognitive abilities compromised he was held out of the car and that's probably a good thing.

Last, whereas it might be convenient to think the team and/or series were somehow negligent, that has proven to not be the case. Power passed the SCAT test Friday after the crash, and the team had every reason to believe he was fit to drive. Further, the series took active measures to reevaluate Power after Saturday. And although the concussion diagnosis turned out to be the wrong one, the test was consistent with the symptoms of his illness.

In other words, in a rather circuitous sort of way, the whole saga revealed INDYCAR is doing a lot RIGHT with respect to this issue.

The weekend got off to a good start with the announcement Thursday that INDYCAR, the city of St. Petersburg and Green/Savoree promotions have agreed on an extension for the race through 2018. While the St. Petersburg event has moved around through the years due to Easter and other scheduling matters, the event has largely enjoyed date equity in March and benefitted from being a known warm-weather destination for those that live in cold-weather states.

Of course, attending the race meant you were spared having to watch the TV broadcast. Sadly, we got exactly what is expected at this point from ABC in conjunction with the IMS Productions staff: AWFUL.

I'll save the details of missing restarts, not showing important replays, telling us repeatedly about Marco Andretti's birthday or whatever else. And no, I'm not suggesting that all would be rosy in the world of IndyCar if there were at least a semi-adequate broadcast. But for the umpteenth millionth time, INDYCAR needs to give itself a chance to attract a broader audience, and the race broadcast certainly isn't helping.

While I know mistakes happen on live TV, the unprofessionalism displayed Sunday is a gross disservice to drivers who put their lives on the line, mechanics who make a living in the series and anyone else who cares about Indy Car racing.

At the very least Mark Miles owes the centennial edition of the world's greatest race a better broadcast than that. Although I hope changes are made before May, I've been around long enough to know better.

Awful broadcast aside, Sunday's rating did show the value of network TV combined with a preferred time slot. Remember, the race was moved up two weeks from its usual last weekend of March date. I'm not sure whether that helped the gate, but I'd feel safe in betting that not going head-to-head with NCAA tournament helped the television rating.

Remember, in 2015, the green flag dropped around 3 p.m. but was wedged between two regional final NCAA tournament games. The 2015 race drew a 0.8 overnight rating and a 0.6 final rating.

While the final rating is not yet in, Sunday's race drew a 1.1 overnight with a 12:50 p.m. ET green flag, a healthy increase.

To reiterate, I've long said IndyCar's TV ratings are ultimately symptomatic of the series' problems, and not THE problem as some suggest. Still, I think a lesson can be learned in taking advantage of the somewhat barren February-early-mid-March sports calendar and not going head-to-head with other major events.

Speaking of going head-to-head with major events, the Phoenix race in three weeks will be on NBC Sports up against the Final Four.

A few hours after crossing the finish line first in the Mexico City ePrix, ABT Schaeffler Audi Sport driver Lucas di Grassi was stripped of the victory. Di Grassi's first car was found to be underweight, and Dragon Racing's Jerome D'Ambrosio was promoted to race winner. This was a repeat of last year's Berlin ePrix when D'Ambrosio was promoted to first-place after di Grassi failed post-race inspection.

However, the story of the weekend was once again series championship leader Sebastien Buemi.

As he has all season, the Swiss had the fastest car in Mexico City. But due to a qualifying mistake for the third race in a row, Buemi had to work his way up to the front. Hampered in part by the ridiculous Mickey Mouse layout in Mexico City, Buemi was unable to get by D'Ambrosio despite a lengthy battle. He was scored with a second-place finish after di Grassi's exclusion.

Buemi is now twenty-two points ahead of di Grassi in the championship. And considering how quick he has been one has to like favor the Swiss' chances to secure the title. That said, between his frequent qualifying mistakes and tendency to become very agitated during the races, Buemi is not exactly displaying the temperament one would associate with a championship-level driver. And if one of the teams can close the gap on RENAULT e.dams and pressure Buemi, you have to think a self-inflicted derailing of his championship chances is a distinct possibility.

Brian Carroccio is a senior columnist for AutoRacing1, and a credentialed member of the Verizon IndyCar Series and NASCAR Sprint Cup Series media.