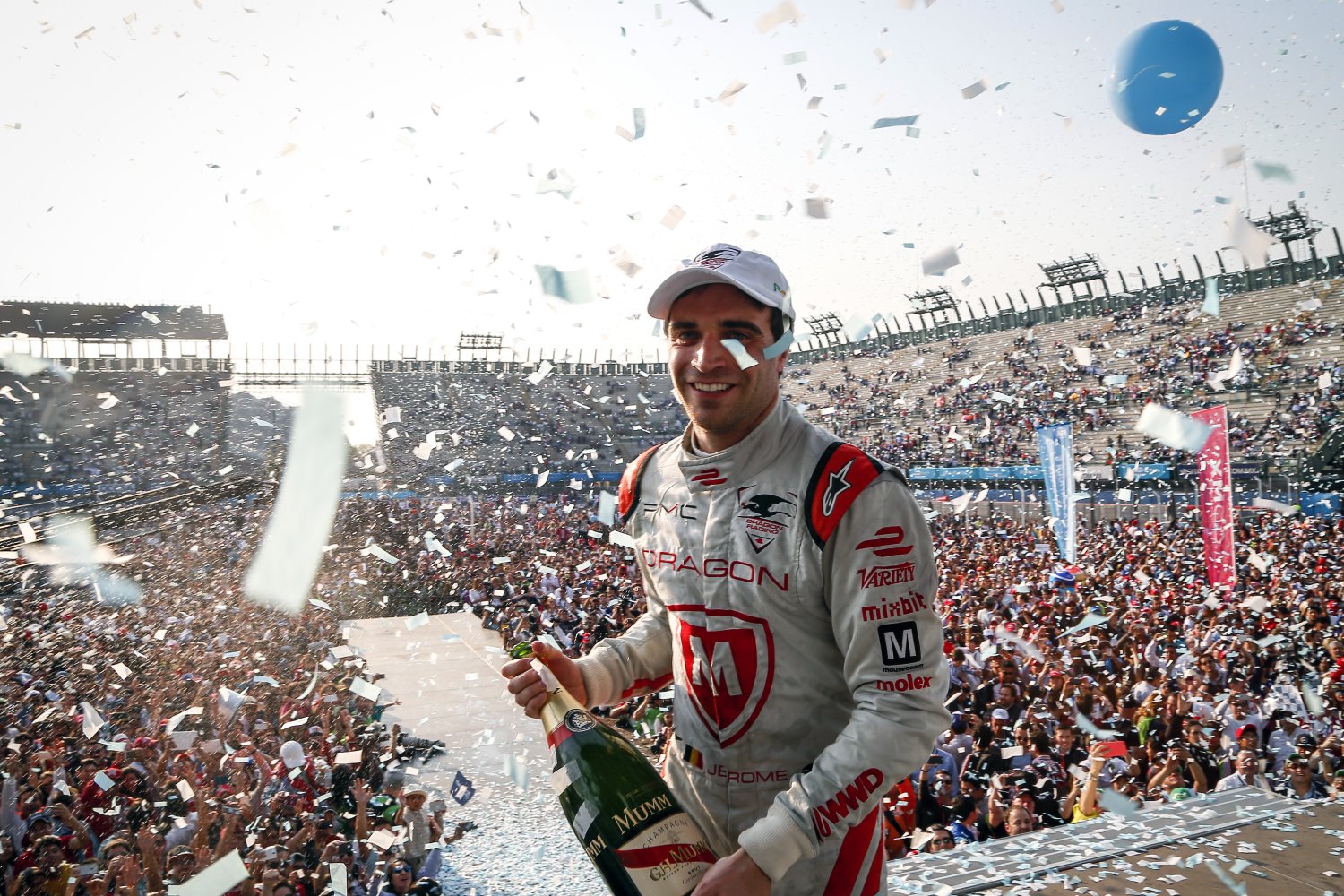 Lucas di Grassi has been excluded from the result of the Mexico City ePrix, handing victory to Jerome D'Ambrosio.

Di Grassi's Abt Schaeffler car that he used for the first part of the race, was found to weigh 886.2kg, 1.8kg under the 888kg minimum. Abt has decided not to appeal the decision.

The decision means di Grassi is now 22 points behind Sebastien Buemi, who is promoted to second place. Nico Prost moves up to third, and the Renault e.dams driver also gains two more points for setting the Visa Fastest Lap after D'Ambrosio's best effort was removed for being set while cutting a chicane.

Loic Duval remains classified fourth but was handed a 15-second penalty for repeatedly cutting the chicane and then ignoring the black and white flag he was shown for this offense.

Robin Frijns is promoted to fifth, Sam Bird to sixth, Daniel Abt to seventh, Nick Heidfeld to eighth, Stephane Sarrazin to ninth, while Bruno Senna now collects the final point in 10th.

03/12/16 Di Grassi has been stripped of his Mexico ePrix win. His Abt Schaeffler car was found to be underweight – more details to follow

03/12/16 Lucas di Grassi used fan power to take an emotional win in front of a large and passionate crowd that was treated to a fabulous inaugural Mexico City ePrix.

The unique layout of the Autodromo Hermanos Rodriguez – part traditional race track, part street circuit – made overtaking tricky, but not impossible. But with an additional 100kJ of energy that di Grassi received through FanBoost, he was able to slipstream Jerome D'Ambrosio and take the lead into the tight first corner.

For three laps di Grassi threw energy consumption to the wind and concentrated on building up a lead instead, which he did with aplomb at almost a second per lap. With D'Ambrosio having his mirrors full of Renault e.dams' Sebastien Buemi, di Grassi was able to establish a comfortable advantage that he converted to not only his second win of the season, but the lead in the drivers' championship.

“FanBoost really helped my race," said di Grassi. “This track is difficult to overtake as you could see. I managed to overtake Nico (Prost) from third to second and then with the help of FanBoost I managed to overtake Jerome (D'Ambrosio) which was not so easy. It was really on the limit for braking for the chicane and the first laps we don't have regen so the car was all over the place."

The battle for second was fierce. Erstwhile points leader Buemi was recovering from a mistake in qualifying, which left him fifth on the grid rather than the pole position his pace in practice had suggested. He passed di Grassi's Abt Schaeffler team-mate Daniel Abt early on, and made up a further place in the pitstops when he leap-frogged his Renault e.dams teammate Nico Prost.

[adinserter name="GOOGLE AD"]On a number of occasions Buemi was able to get in the slipstream of the Dragon Racing car, but each time D'Ambrosio defended robustly. On one occasion there was even contact as Buemi tagged the back of the Belgian at 200kph as they disputed position. Finally, he did manage to get ahead, but had to cut the first chicane in the process.

As Buemi backed off to allow D'Ambrosio to re-pass, it allowed Prost, Abt and the second Dragon of Loic Duval to get into the fight. Eventually, the previous order was restored, but by now di Grassi was almost 10 seconds up the road. The fight for second went all the way to the flag and a photo-finish, with D'Ambrosio crossing the line just ahead!

D'Ambrosio said: “It was really a close call with Seb. We just spoke about it on the podium but I need to see a replay to see what really happened there. One moment we had contact in the first corner and everything went fine. Then he overtook me but cut the first chicane. When he let me by he always lifted in a place I was not going to try to overtake him. Therefore, it created a big mess all around. I think in the end everything played out correctly."

D'Ambrosio joined di Grassi in performing some fantastic donuts in front of the 33,319-strong crowd, who then cheered their heroes on some more as they collected their trophy on the stage The Rolling Stones will be playing on in two days' time.

“I think today we weren't quick enough to be honest," said Buemi. “It's a very strange track here. The altitude, the asphalt was very warm and we didn't have much grip. Looking forward to going back to a normal type of circuit. Clearly what happened in qualifying is a bit annoying because it is hard to understand what happened, I kind of didn't really understand. So at the moment we won't try to analyze it because the car is good enough but in the race it was not really there."

Duval took fourth while Prost finished fifth despite picking up a drive-through penalty for an unsafe release during the pitstops. On the penultimate lap Abt felt something break in the front of his car, which pitched him into the wall. He was able to limp his damaged car home in eighth. Robin Frijns took full advantage of the late drama to take a solid sixth place for Andretti, while Sam Bird felt that seventh place was the maximum he could achieve for DS Virgin Racing this weekend.

Nick Heidfeld picked up two points in ninth, while Stephane Sarrazin collected the final point for Venturi in 10th despite leaving the pits with his car set in 100kW mode.

[adinserter name="GOOGLE AD"]FIA President Jean Todt, who was in Mexico to sign an agreement with Jose Abed, Vice President for Sport and President of OMDAI and the Mayor of Mexico City Miguel Angel Mancera implementing safety training courses for public transportation vehicle operators, was on hand to witness the successful first foray of all-electric racing to Mexico.

“Formula E – a young competition attracting fresh audiences – provides us with a platform to raise awareness on road safety to the thousands of spectators attending, altogether with our partners from the GRSP and the Red Cross," he said. “Making significant progress to reduce the number of road crashes' victims can only be achieved by bringing all stakeholders to take action together, and this weekend we will demonstrate that this is possible."

What the weekend also demonstrated is that Formula E can produce unpredictable, exciting action that gets the crowd on its feet and shows that sustainable motorsport is the motor racing not just of the future but of the here and now.