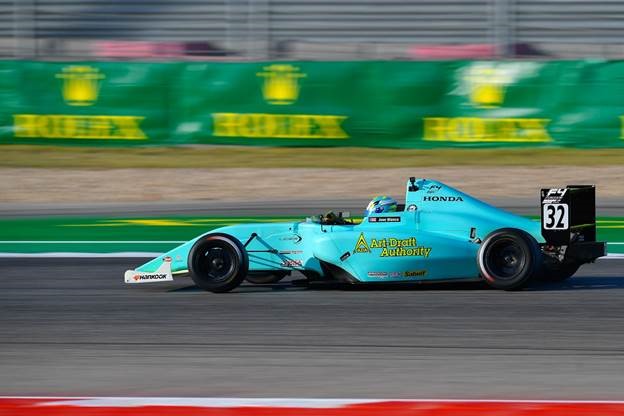 Times could not have been closer in the Formula 4 United States Championship Powered by Honda qualifying on Friday at Circuit of the Americas. When the dust settled, only 22 thousandths of a second separated the front row with Jose Blanco edging out Nicky Hays to claim his fifth pole of the season. Times were so tight that just over eight tenths of a second covered the top-10 finishers, the closest qualifying all season.

Chasing a championship title, Blanco needed a good starting position in the stacked 38-car field to maximize his podium potential in Saturday’s opening round at the United States Grand Prix. Blanco sits fourth in the season-long points battle, trailing just 15 points behind Jay Howard Driver Development rookie Christian Brooks in third. While second place is mathematically out of Blanco’s reach, the Puerto Rican pilot still has a shot of clinching third place.

With everything to lose, Blanco risked it all with a waiting-game strategy that left him clean air and an open track to set off a flyer of 2:15.736-seconds in the closing moments of the 20-minute session.Following a single-car red flag incident, drivers were sent to pit lane to wait as the safety crew cleared the wreckage. Eating precious time off the already abbreviated session, cars were released from pit lane with less than seven minutes remaining on the clock. Instead of trying to fight traffic for three laps, Blanco waited for a break in the train of Honda-powered machines with the goal to get in one clean lap. His strategy was successful as he watched his Crosslink/Kiwi Motorsport team celebrated from the seat of his No. 32 Art-Draft Authority Ligier JS F4 as he crossed the stripe.

“Qualifying was really intense today, the competition here from the front to the back is so good," Blanco said. “I waited behind to get one clean lap and nailed it. It felt so good to see my name change to first on the board. It’s the biggest race of the year in front of the largest crowd of the season and Puerto Rico is here to put on a show. I am very excited for tomorrow’s race."

After his times in practice placed him outside of the top-10, Hays knew he had more to give DC Autosport with Cape Motorsports in qualifying. Hays, who recently closed his rookie season in the French F4 Championship in third place, crossed the line before Blanco with a fast lap of 2:15.758-seconds in his CoTA debut. Hays’ name quickly shot to the top of the leader board before Blanco eclipsed his time just seconds later.

Hays joined the championship-winning outfit for two mid-season events, finishing the six-race stint with two podiums for DC Autosport. With victory just out of reach earlier in the season, Hays returns to F4 U.S. with a little more experience and a hunger to win stateside.

“It’s great to be back racing in the states," Hays said. “It took a little bit of guessing earlier today in practice as it was my first time on the track and my first time back in the Ligier JS F4 car in almost three months. We really worked hard with DC Autosport in analyzing data and going into qualifying I knew what I had to do. I feel more comfortable every lap in the car. I am looking forward to the races this weekend."

In preparation for the weekend, Velocity Racing Development driver Michael d’Orlando tested the team’s F3 Americas car around the fast and challenging CoTA circuit two weeks before making his USGP debut. He put what he learned to good use, as he clicked off a quick time of 2:15.934-seconds, landing him a second-row start, the best placement of his F4 career.

“I can’t even explain how I’m feeling right now other than pure bliss," d’Orlando expressed. “The testing in the F3 car gave me more familiarity with the track and made me feel comfortable behind the wheel. An overwhelming feeling of calmness came over me and I was ready. I got P3 in qualifying and I am really happy."

Another driver that had a breakthrough day was Wyatt Brichacek. The Jay Howard Driver Development sophomore glided through the 20-turn, 3.47-mile circuit, making each of the challenging segments look easy. The extra time he spent testing and the hours on the simulator preparing for the F4 finale paid off as he earned his best qualifying finish of the season. With a time of 2:15.957-seconds, Brichacek will start Saturday’s race on the outside of Row 2.