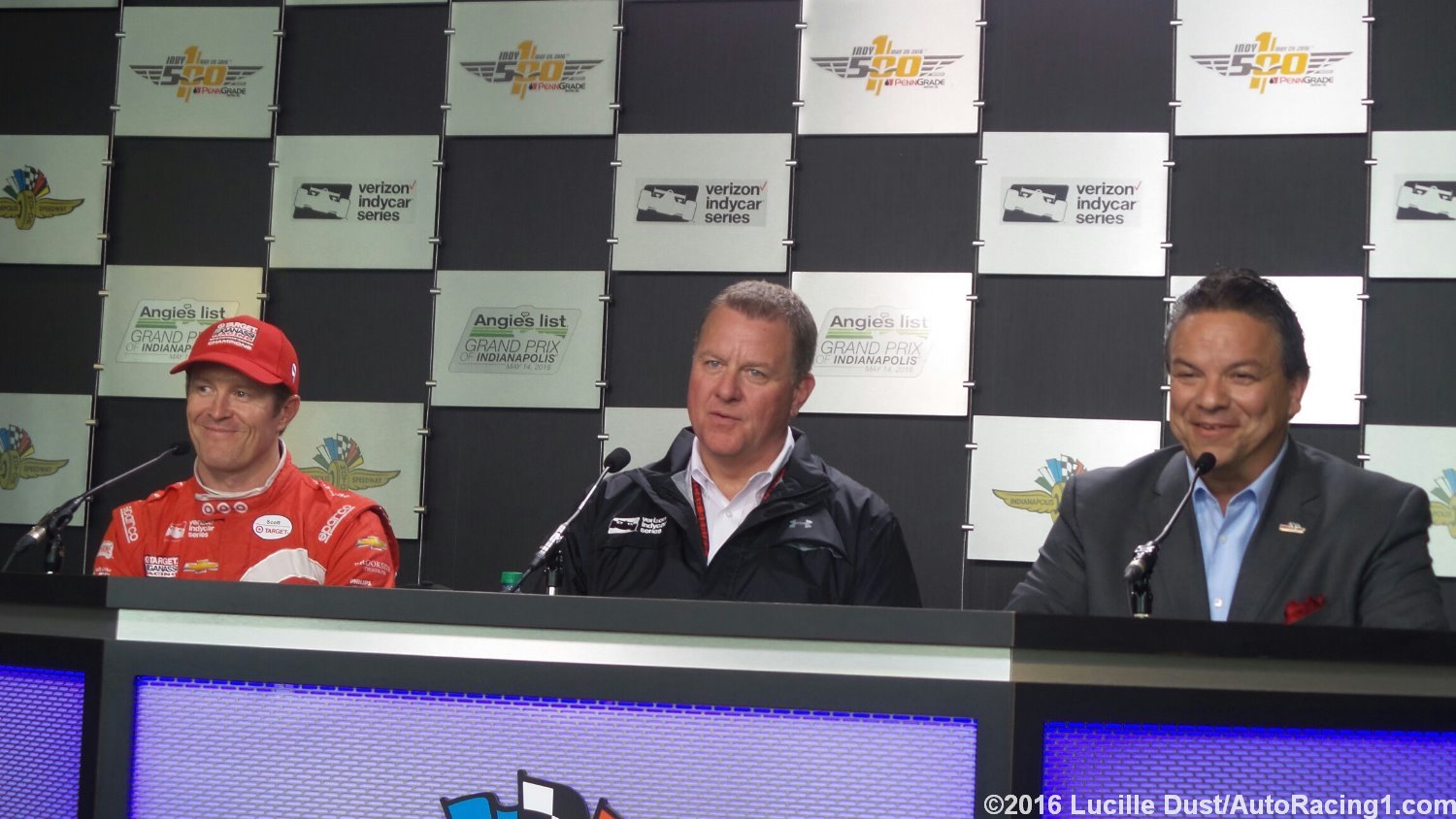 Below, is the release from INDYCAR. This rumor, broke by AR1.com during the Long Beach weekend, is upgraded to 'fact.'

INDIANAPOLIS – INDYCAR is reuniting with an old friend for Labor Day weekend.

The sanctioning organization announced today that the Verizon IndyCar Series will return to Watkins Glen International in upstate New York for an event on Sept. 1-4. Indy Lights presented by Cooper Tires, the top rung of the Mazda Road to Indy developmental ladder, will also be part of the weekend schedule.

The Verizon IndyCar Series event will be the 15th of 16 races on the 2016 schedule. It replaces the Grand Prix of Boston that was canceled by the race promoter two weeks ago.

“It’s great to have the Verizon IndyCar Series return to Watkins Glen," said Jay Frye, INDYCAR president of competition and operations. “A tremendous amount of thanks goes to track president Michael Printup and his entire staff for their efforts in helping make this a reality in such a short time frame.

“Obviously, Watkins Glen has great racing history and it’s a track that will showcase the on-track competition and overall excitement level of our series. Our season is off to a great start and we can’t wait to bring the Verizon IndyCar Series back to our fans at Watkins Glen."

Watkins Glen International has a noted open-wheel racing history that has included Indy cars and Formula One. The scenic, undulating permanent road course has hosted nine past Indy car races, from 1979-81 and again from 2005-10. The first two events were run on the 2.4-mile short course and were both won by Bobby Unser. The race moved to the 3.4-mile long course in 1981 when another Indy car legend, Rick Mears, drove to victory.

The Verizon IndyCar Series returned to the historic circuit in 2005, with Scott Dixon winning three straight years before Ryan Hunter-Reay won in 2008 for Rahal Letterman Racing, Justin Wilson secured the first-ever Indy car win for Dale Coyne Racing in 2009 and Will Power took the checkered flag for Team Penske in 2010.

“We’re excited to welcome INDYCAR back to The Glen," Printup said. “The fact that we could put this deal together so quickly shows how motivated each party was to make this happen for the fans and the competitors. This deal was put together in two weeks, which I think is a record in motorsports."

Watkins Glen joins Phoenix International Raceway and Road America in a 2016 schedule that returns INDYCAR to fan-favorite venues with deep history in the sport. The 60-lap event will be held on the track’s 3.4-mile permanent road course that includes “the boot" extension from the short course. NBCSN and the Advance Auto Parts INDYCAR Radio Network will broadcast the race.

“Open-wheel (racing) is synonymous with Watkins Glen International," Printup said. “It has been for a long, long time. With those cars on that track, it’s just a blistering pace. Racing ‘the boot’ is one of the finest things in motorsports you can watch. … You’re making a left, a tight right and another left and a tight left at the top, and that’s one mile in just a few seconds. That’s awesome with these Indy cars.

“The racing is going to be fantastic. Reintroducing the sport to Watkins Glen International and that world attention that INDYCAR can get at Watkins Glen, combining those two synonymous brands and that history, that will be our success, I think."

Tickets for the Labor Day weekend event will go on sale next week and will be available for purchase at TheGlen.com and by calling (866) 461-RACE. As the penultimate race on the schedule, it will likely play an integral role in the chase for the 2016 Verizon IndyCar Series championship.

The 2016 Verizon IndyCar Series season continues with the Angie’s List Grand Prix of Indianapolis on May 14 (ABC, 3:30 p.m. ET) and includes the highly anticipated 100th Running of the Indianapolis 500 presented by PennGrade Motor Oil on May 29 (ABC, 11 a.m. ET). For information on the series, its 16-race schedule and the 100th Running of the Indy 500, visit www.indycar.com.

05/13/16 IndyCar has scheduled a special press conference for a 'major' announcement today at the Indy Speedway and speculation is that Watkins Glen will be announced as a replacement for the cancelled Boston GP.

05/09/16 Watkins Glen International has emerged as the frontrunner for an IndyCar Series race on Labor Day weekend, the IndyStar also reports. The Sept. 2-4 weekend was recently vacated by the Grand Prix of Boston, and IndyCar and the decision-makers operating the track in upstate New York have moved quickly on a possible deal. An announcement could come this week, according to a source close to the negotiations.

05/06/16 AutoRacing1 is hearing that you can cross off Gateway Motorsports Park as a possible replacement for the recently canceled Grand Prix of Boston Powered by LogMeIn. While INDYCAR is looking at Gateway, we hear track and series are seriously a race for 2017.

This would make Watkins Glen International the next logical choice. Recall we rumored that WGI President Michael Printup and INDYCAR were in discussions about the series returning to The Glen in our Overheard at Long Beach. Of course, there is a Ferrari Club of American event at the track Labor Day Weekend, when the race would run. And we can't imagine the FCA would give up their traditional date without some resistance. However, as you can see from the rumor below, WGI did leave the door open if track and series could reach some sort of agreement beneficial to both parties.

Anyway, as things stand now Watkins Glen is where the smart money is for IndyCar racing Labor Day Weekend. This rumor is upgraded to strong. And we should know something for certain in the next few days.

05/05/16 For more insight on the possibility of the Boston race being replaced by Watkins Glen, see this Star-Gazette article. It sounds like Watkins Glen is more than happy to host an IndyCar race if IndyCar pays Watkins Glen to compensate the Ferrari Club for their inconvenience, and probably some splitting of ticket sales revenue.

05/04/16 Michael Printup, president of Watkins Glen International in western New York left the door open to a Hail Mary relocation of the Labor Day Grand Prix of Boston to his course, but said the track is scheduled to host a Ferrari event over Labor Day weekend.

“We’d be a great site for them, we already were," Printup told the Boston Herald. The track hosted the IndyCar race that was targeted for the Hub for several years. “Where there’s a will, there’s a way, but we’re not even there yet. It’s a huge challenge."

Printup said IndyCar President Jay Frye called him Friday night shortly after the Boston deal fell apart to inquire about the availability of Watkins Glen, a celebrated track once renowned as the home of Formula One racing.

“If Jay came back and offered something that was just totally irresistible for Watkins Glen, we’re a business, we’re publicly traded, we’d listen to it," Printup said. “Jay’s a trusted soul in the racing business."

Printup said scheduled races have been moved around in the past or merged with other races when a new opportunity presents itself.

“Their desired weekend, Labor Day, does have somebody on it — that’s never stopped people before," he said.

Why can't IndyCar run the weekend in conjunction with the Ferrari event? It's not like the IndyCars would be on the track that much over the three days. There would be plenty of track time for the Ferraris. The issue would be who gets to use the garages and whether IndyCar is willing to run the race with little or no sanction fee paid by Watkins Glen.