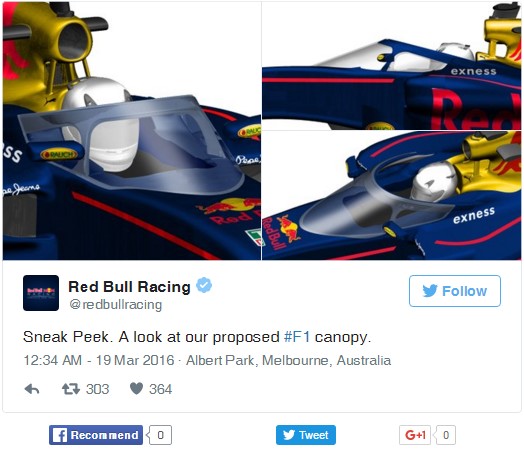 Red Bull's canopy could become the preferred option for 2017 – when it's expected that increased head protection will become mandatory in Formula 1.

Currently the 'Halo' concept proposed by Mercedes and trialled by Ferrari during pre-season testing has gained the most support from those within the FIA, but Red Bull believes its solution not only offers greater protection, but is visually more acceptable.

The FIA's Charlie Whiting has now agreed to let Red Bull trial its version – which is more similar to a fighter-jet canopy – during opening practice for the Russian Grand Prix next weekend, pending the results of further testing due to take place in Friday.

If the tests go as expected and match – or even surpass – those of the Halo, then Red Bull will fit a version to its RB12 during FP1 in Russia in order to gain feedback from its drivers.

Whiting admitted it could then become the preferred option for introduction next year: "We have got to take it [this concept] seriously. If it performs as well as the Halo in testing there's no reason why we can't present it as a potential solution to the Strategy Group and F1 Commission," he told Motorsport.

"Personally I would say the canopy is more aesthetically pleasing solution. However, if both solutions perform equally well in testing I would be surprised if there's an overwhelming desire to keep the Halo."