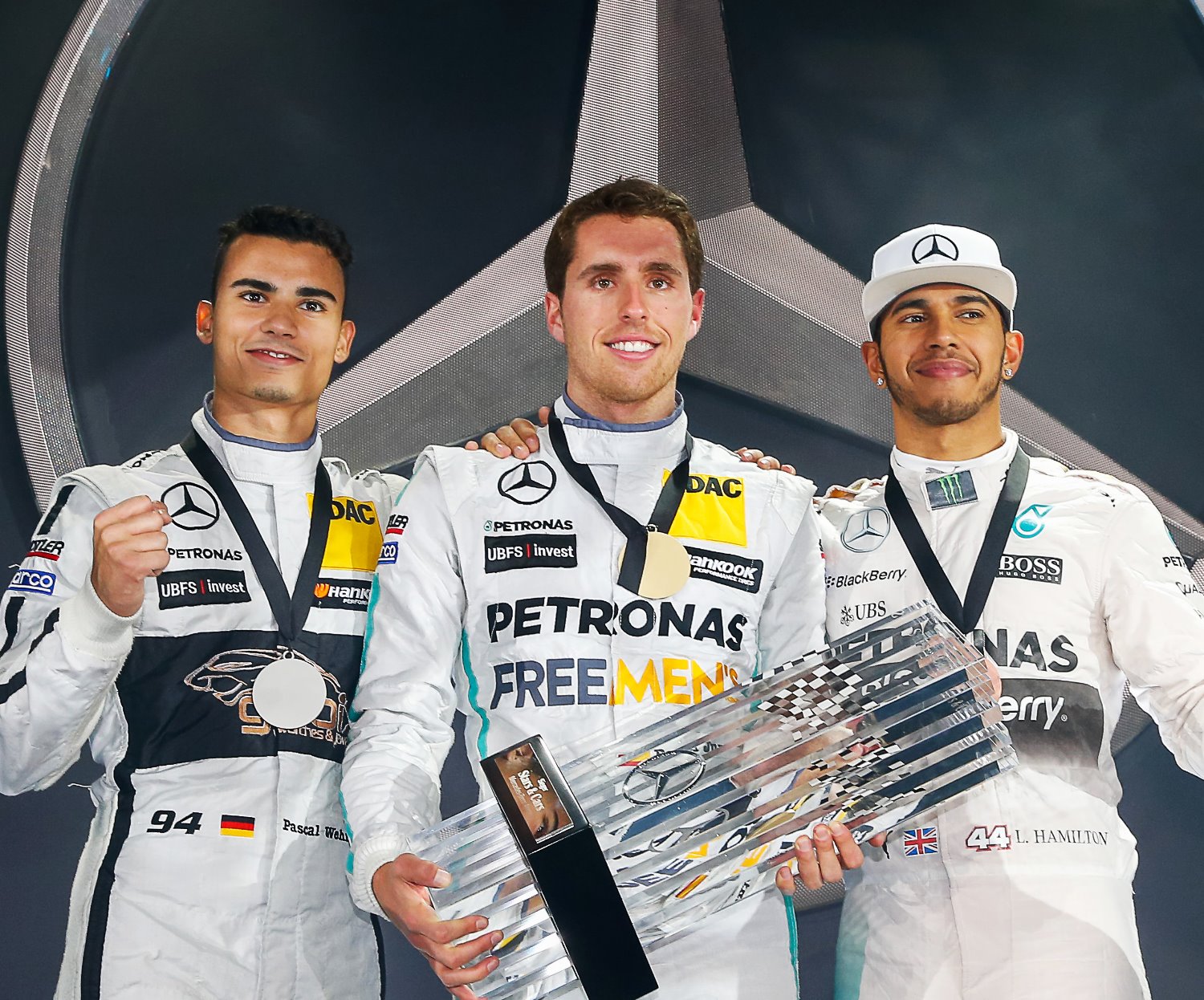 Stuttgart: A perfect way to round off the most successful year in the motorsport history of Mercedes-Benz, as Daniel Juncadella is crowned first ever Stars & Cars Champion. In front of 35,612 spectators at the Mercedes-Benz Arena Stuttgart, the Mercedes-AMG DTM driver prevailed over Pascal Wehrlein in the fourth and final round of the day. This victory for Juncadella rounded off a motorsport season in which Mercedes-Benz claimed no fewer than 19 titles in Formula 1, the DTM, Formula 3, the GP3 Series and the AMG Customer Sports Program.

"We've had an incredible motor racing year," said Ola Kallenius, Member of the Board of Management of Daimler AG responsible for Mercedes-Benz Cars Sales & Marketing. "Everybody in motor racing is passionately committed to the sport and always wants to triumph, but never in our wildest dreams did we imagine that we would win every series in which we took part this season. And so, from our perspective, it was a fantastic year for us. Motor racing is incredibly important to Mercedes-Benz. Our brand was born on the racetrack, and this year our star shone brightly as never before in the world of motor racing."

"We've achieved all of our goals this year. We again won the Formula One drivers' and constructors' world championship with Lewis and the team. In the DTM, we bounced back this year after a tough season in 2014, and the successes of the guys in the other series put the icing on the cake," said Mercedes-Benz Head of Motorsport Toto Wolff. "There is no silver bullet in motor racing. You have to make the right decisions and mold the best drivers and engineers into a team. Having the right team spirit is often underestimated, however, but it's especially important. Our team spirit was outstanding this year. We all pulled together and, as a team, experienced the most successful motor racing year in the history of our brand."

Road to the Stars & Cars final

Stars & Cars, the traditional end-of-season celebration for Mercedes-Benz, was held in a football arena for the first time this year. The four knockout rounds of the competition were contested by 16 drivers, including the two Silver Arrow Formula One stars Lewis Hamilton and Nico Rosberg as well as all eight Mercedes-AMG DTM drivers. Other participants included two-time Formula One World Champion Mika Hakkinen, former F1 and DTM driver David Coulthard and record DTM championship winner Bernd Schneider.

On the way to victory, Juncadella prevailed over Lucas Auer, Bernd Schneider and Nico Rosberg. His opponent in the final, Pascal Wehrlein, eliminated Jean Alesi in the first round before going on to beat David Coulthard in the quarter-final and Lewis Hamilton in the semis. The winner of the final round under the floodlights of the Mercedes-Benz Arena was Juncadella by a score of 2:0.

Between each of the four rounds of Stars & Cars, there were ‘show duels' with a novelty factor. One of these special encounters was between two former McLaren team-mates, Mika Hakkinen and David Coulthard, each driving a Mercedes-Benz G 63 AMG 6×6. Other exhibition runs were contested with historic Silver Arrows or DTM cars such as the Mercedes-Benz W 196 R, the Mercedes-Benz 300 SLR and the Mercedes-Benz 190 EVO II. Appearances by Sir Stirling Moss, Hans Herrmann and Susie Wolff aroused stirring memories of Silver Arrows past. The former Mercedes-Benz DTM contestant ended her active career as a racing driver this year, so Stars & Cars marked her official retirement.

In addition to the races on the track, which had been specially laid out on the pitch of the Mercedes-Benz Arena, the 35,612 fans enjoyed a varied program of entertainment. This included pit stop competitions between the Formula One and DTM crews, interviews with the drivers and musical performances by Cro, Culcha Candela, Marlon Roudette and Larry van Housen.

Comments from the drivers on Stars & Cars

Daniel Juncadella, Winner: "I'm absolutely delighted. I felt really comfortable in the SLS AMG GT3 and found a good rhythm. Stars & Cars was a super event – there were so many fans here tonight. Simply incredible. I was nervous going into each of the races. It's been a very special occasion."

Pascal Wehrlein, P2: "That was simply fantastic. It was a real DTM final, with me up against Daniel. I gave it everything I'd got, but ultimately it wasn't to be. All the same, it's been an incredible evening. I'm looking forward to doing it all over again next year."

Lewis Hamilton, P3: "That was a lot of fun. The donuts and the drifts were great. I lost the semi-final against Pascal on the start. Unfortunately, I got off to a poor start, but Pascal drove really well. It was incredibly close – there was less than a tenth in it."

Nico Rosberg, P4: "Wow, that was a super experience driving in the Mercedes-Benz Arena in front of so many fans. Obviously, I would have liked to make it through to the final, but ultimately, it wasn't quite enough. The DTM guys were really fast and they beat Lewis and me. Respect to them for that!"