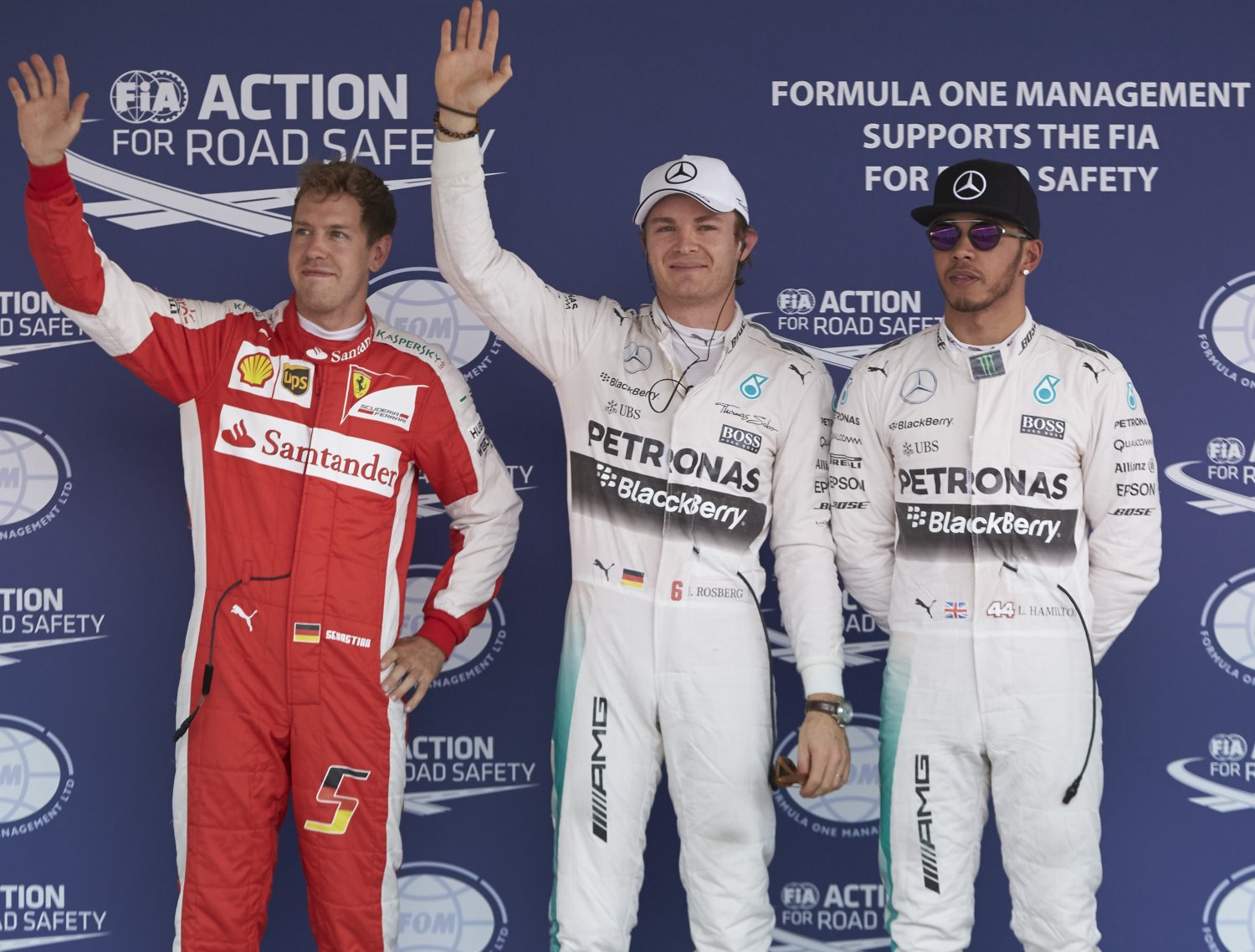 Q: Nico, first of all congratulations, your fourth pole in a row. Qualifying is proving very strong for you at the moment, what was the key today?

Nico ROSBERG: I don't really have a precise explanation. I just felt good all weekend. I've been quick in all different sessions and found a good balance in qualifying. So thanks to my engineers in the team I was able to push and got a really good lap in.

Q: Thank you. Lewis, if I can come to you. You looked good in Q2, you were on top in Q2, but that 50th pole is proving tricky. Were there any mistakes in Q3 on your final lap?

Lewis HAMILTON: Not really, no. This weekend Nico has been quick and I've just been chipping away at it. There were a couple of moments where the car felt pretty spectacular but otherwise generally there are some areas where, for sure, I could improve both in my driving and also with the set-up. But we have quite a bit of a different set-up this weekend, so perhaps the avenue I went might not be the perfect one for qualifying but it'll be good for the race.

Q: Thank you. Sebastian, you tried everything, [but] Mercedes [were] too quick today. Was the drop in temperature in that final session a factor at all for you?

Sebastian VETTEL: I don't think so. In the end we were hoping for it to be a bit closer but in the end it wasn't. I think already in Q2, in Q1 to be fair, with the hard tire they looked very, very quick, so it was difficult. I tried everything. I was very happy with the first attempt in Q3. On the second one I probably pushing too hard and I didn't go any faster. Yeah, I don't think it is fair to blame it on the conditions or the track. In the end they were just a sniff too quick. But who knows what happens tomorrow. Seems to be a fun circuit. Finally it starts to rubber in a bit. Yesterday it was very slippery. It's good fun and it's nice to see so many people coming, so I think it should be exciting for all of us tomorrow.

Rosberg: It's a good start, for sure, starting from pole. It's going to be a long run down to turn one, so it's going to be an exciting battle. Then I'm sure we have a good race car. It will be interesting tire-wise. There was some stuff going on on Friday, which is going to be not so easy to handle in the race but we're prepared well, so looking forward to it.

Rosberg: No, definitely not. There's no difference, it's attack like always. It's three more races to go, great to be here in Mexico, great track, I really enjoy driving here, so business as usual.

[adinserter name="GOOGLE AD"]Q: Lewis, P2 hasn't proved too much of a problem for you in recent times, there's a very long run down to Turn One as well. Is that your target for the race tomorrow?

Hamilton: Actually coming into the weekend it's one of the best spots to start, second or third because it's a long, long way down to Turn One. Just as in Russia. I don't know if it's longer than Russia but I'm quite happy with my spot. As you've said, the races have always been proved to be quite good ones for me so I'm excited for tomorrow and, yeah…

Q: Sebastian, it's looked close this weekend. Did you think pole was on?

Vettel: Well, now we've just finished qualifying… no! If we talk about another tenth I think it's always normal for us to say "yeah, one-tenth here or there, could have squeezed a bit more," but I was reasonably happy with my lap and I think we were missing four-tenths in the end so the gap was probably too big. We have to be fair and say congratulations to Nico who drove a very good qualifying and put in a very strong lap.

Q: (Luigi Perna – La Gazzetta dello Sport) Question for Seb. In your opinion, it will be possible tomorrow to match Mercedes considering your race pace especially with medium tires?

Vettel: Well, I can't predict what's going to happen but usually we're always a bit stronger, compared to them, in the race. As Nico touched on with the tires, could be crucial tomorrow, the circuit is very slippery and I expect it to be slippery again. There might be some rain overnight so might be a bit of a reset for the track. To answer your question, we will have to wait and see tomorrow – but I hope so.

Q: (Michael Schmidt – Auto, Motor und Sport) What happened at the end of qualifying, because everybody seemed to be slower than before?

Rosberg: I was a tenth off my (best) lap, I think, so it was a good lap, just not as good as the previous one.

Vettel: Sounds like a good excuse! I did the same, I was a tenth off, it was a good lap, just not as good as before.

Hamilton: Yeah, I just wasn't quicker on that lap.

[adinserter name="GOOGLE AD"]Q: (Christopher Joseph) To all of you, we touched on altitude on Thursday. I just wondered if you're feeling any physical effects after qualifying and in general, out and about in Mexico City?

Hamilton: No issues, it's tough out there as usual and it will be interesting for the race tomorrow for sure with the altitude. It does make a difference. And otherwise, so far I've had the best time here, I had the best tacos last night and I'm going to go back and have them again tonight and tomorrow night and probably the next night as well. I'm enjoying my stay.

Rosberg: The only time I felt it was running round the track where for sure I had a higher heart rate on Thursday but in the car, not really, it's been fine.

Vettel: I think it's fine, we have a very very long straight to rest so that helps. Other than that, I think it's great for us, it's exciting, a lot of people. I think the size of the grandstands here seem to be at least double to other places and still full so it makes it very special for us.

Q: (Livio Oricchio – Globo Esporte) Lewis and Nico, there's no way not to ask you (this question) considering what we saw in the last few races; will there be any conversation between you both considering the start tomorrow?

Rosberg: It's no different, you know, it's always going to be a battle and what's in the past is in the past and now we move forward, it doesn't change.

Vettel: Can you make sure you take both of you out so I can go through? Yes? No?……OK, I tried.