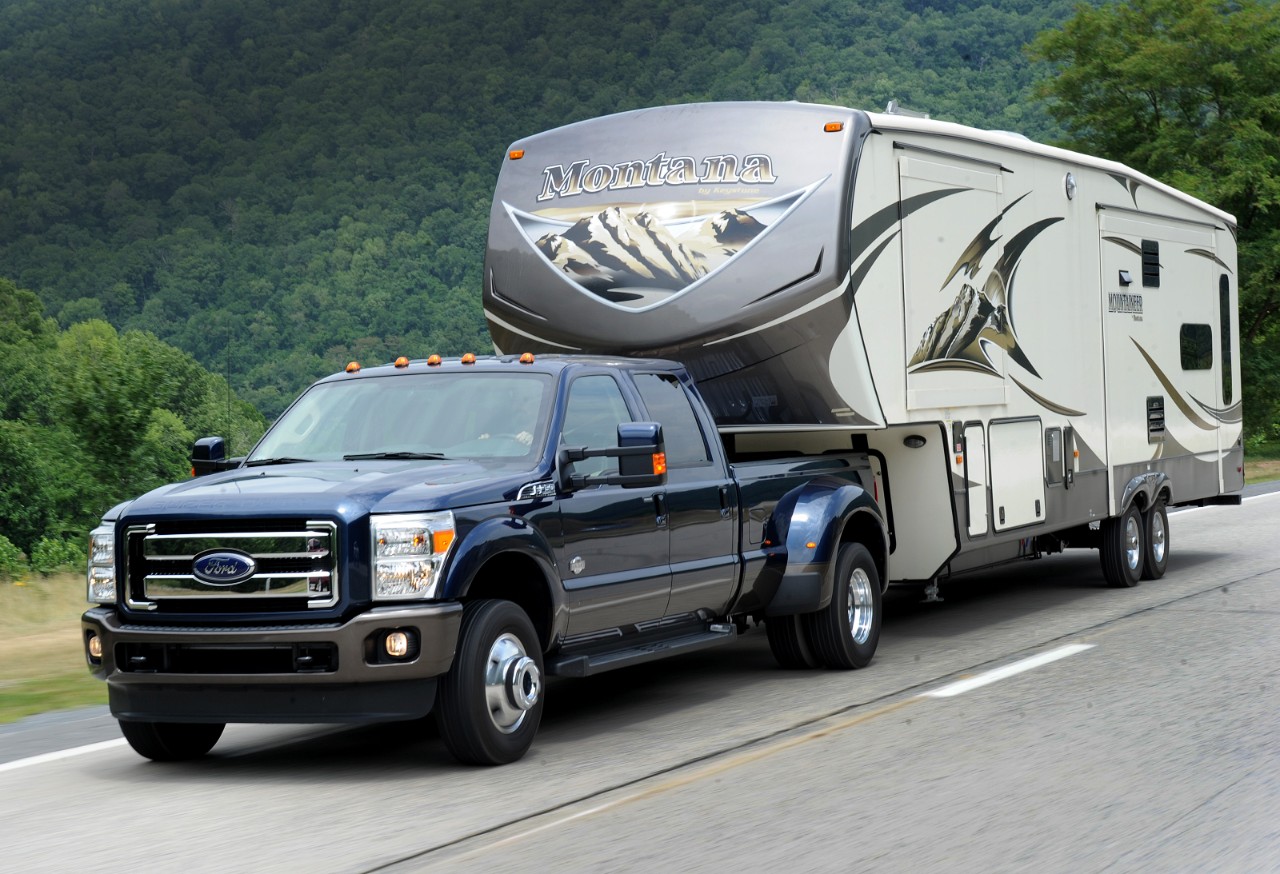 The heavy duty diesel pick up market war has been going for many years now and I think it is safe to say that Ford has brought the biggest gun to the fight. Everyone talks about how their truck can haul the most but we wanted to see just how well the new Ford F350 can tow so we arranged a test to tow the biggest trailer that we could find to see the results.

Key innovations on the 6.7-liter Power Stroke are its compacted graphite iron engine block and reverse-flow layout. This design places the exhaust inside the engine's V-shape with the air intake positioned on the outside, resulting in shorter airflow from the exhaust system to the new, larger turbocharger sitting between the engine's cylinder banks which improves turbo responsiveness.

[adinserter name="GOOGLE AD"]Positioning the turbo inside the engine's valley also helps isolate the engine's hottest temperatures, improving performance and efficiency while also reducing noise, vibration and harshness to enhance driver comfort. Other upgrades include a larger turbocharger for increased airflow, resulting in more power. The compacted graphite iron engine block is stronger yet lighter than cast iron, is more wear-resistant, and has enhanced sealing properties.

New injector tips spray a higher flow of atomized fuel into the cylinders, which helps provide additional power, a more complete burn and reduced noise, vibration and harshness. Other benefits include lower emissions and less fuel deposit buildup on the intake valves over time.

"The designers of the original 6.7-liter Power Stroke V8 turbo diesel predicted it would eventually need to be upgraded for higher output," said David Ives, Ford Power Stroke technical specialist. "They made it easier to add a larger turbocharger, increasing airflow and creating more power for dramatically improved performance, and yet we haven't lost any efficiency."

A good truck is more than just a great engine and our F350 Lariat 4WD would not disappoint. As soon as you get in, actually as soon as you open the door, you realize that this is a big vehicle and it will require some climbing to get into.

Once you have climbed into the beast, you will think you are inside a luxury vehicle not a truck. There are tons of features from leather seats and center console to wood dash trim, and a great sounding stereo with sub-woofer. There is a 4.2 inch LCD screen in the middle of the dash that provides all kinds of information on fuel economy, off road data (roll angles, 4wd system), gauges, trailer brake controller information, and more.

Then there is a huge navigation screen in the center which controls everything from the great sounding audio system to the climate control system. The interior design theme is very rugged and truck like and should make truck buyers very happy. The interior is designed for people that use the F350 for work so it has plenty of storage holes and lots of cup holders. The only disappointment is the small glovebox on the lower dash while the upper dash space is taken up by a giant air bag. We are not sure what is taking up all that space but it just looks like there has to be more space there for a bigger glovebox.

[adinserter name="GOOGLE AD"]Once you are on the road, the F350 reminds you that it a truck with a very truck like ride. Certain freeway bumps really upset the F350 where instead of absorbing the bump, it just bounces over it. But if you expect to be hauling heavy loads, you need stiff springs and that is what you get when you order an F350. On the plus side, the truck chassis is very stiff and there are no rattles or squeaks.

At one point we got on the freeway and were more focused on merging safely when we realized that we were doing 85 mph with the trailer. Thankfully there were no police around but it was amazing at how effortlessly, the F350 picks up speed. Hills are not a problem even when towing a big load and on the open highway, the big beast just wants to cruise. The ride is actually much better with a big load so the F350 becomes a great friend on a long drive hauling an RV or a boat or any other big load.

Long trips do not have to be costly with the F350 especially with the current diesel prices being low. Fuel economy is pretty decent for such a huge and powerful vehicle. We were happy to get about 17 mpg on the freeway empty and around 11 mpg towing the big trailer. The 6.7 V8 can even run on 20% biodiesel (B20).

Probably the biggest flaw with the F350 is price. Trucks are getting more expensive and more luxurious. As manufacturers add more luxury items, the price goes up but amazingly the sales goes up as well. So they keep adding more. It used to be that the XLT trim was the top of the line but now the XLT trim is just in the middle. Base price for an F350 is just about $33,000 which sounds good but just the diesel engine alone is a $9000 option. You can easily end up with a truck that costs north of $75,000.

The good news is that you can configure the truck the way you want it so you don't buy options that you don't need and there are lots of discounts and rebates on these trucks so if you look around and time your purchase right, can find a great deal. The other bonus is that these trucks hold their value very well.

A big F350 is not the right vehicle for everyone and it is not a vehicle for those living in large cities where parking is tight and streets are narrow. But some people can't live without a big truck and whether you need one for work or to take the family on a camping trip, it can be quite useful. Shop around and look for a good deal and you will be impressed.