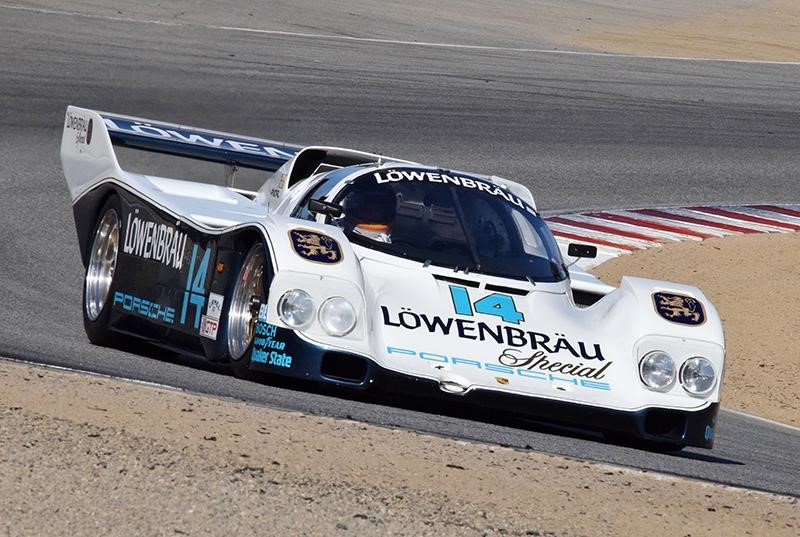 The entry list for the fifth Historic Sportscar Racing (HSR) Classic Daytona presented by IMSA, November 13 – 17, at Daytona International Speedway (DIS) was officially announced today by HSR officials, and the 2019 edition the Classic 24-Hour race at the "World Center of Racing" is on track to be the biggest running of the race to date.

Currently showing over 300 drivers in more than 175 entries from 15 different countries, the list includes an impressive collection of past and current champion drivers, sports car racing legends, motorsports notables, rare and priceless historic sports cars and much more.

One entry certain to steal the spotlight is the legendary Holbert Racing No. 14 Lowenbrau Special Porsche 962 HR1 (pictured above and below), entered by Kevin Jeannette and Gunnar Racing, that will be co-driven by car owner Rodrigo Sales, Derek Bell, Justin Bell and Gunnar Jeannette.

Holbert Racing built chassis HR1 at the team race shop in Warrington, Pennsylvania and debuted the 962 midway through the 1985 season. The car won 10 races in IMSA competition, including the 1985 season finale at Daytona with Holbert and Al Unser Jr. co-driving.

The HR1 returns to Daytona for its second Classic 24-Hour race appearance but the first with Derek Bell on the driver lineup. Bell is a three-time winner of the Rolex 24 At Daytona, with the first pair of wins back-to-back victories with Holbert and Unser in 1986 and 1987 in an earlier No. 14 Lowenbrau Special Porsche 962. Bell made 20 career starts in 24- hour races at Daytona, beginning in 1971 when he co-drove a Wyer/Gulf Porsche 917K with Jo Siffert. His last appearance was in 2003, co-driving a Jim Derhaag Corvette with his son Justin, who had the fastest lap in qualifying.

Car owner Sales has been an emerging talent in both IMSA and World Challenge GT4 and Touring Car competition in recent years, with Gunnar Jeannette among his co-drivers.

Kevin Jeannette's son – and the namesake of his father's long-running Gunnar Racing team – Gunnar is an accomplished professional driver in his own right. His titles include the 2011 IMSA Le Mans Prototype Challenge (LMPC) "PC" championship and a Petit Le Mans GT Daytona (GTD) class victory with WeatherTech Racing in 2018.

The 2019 Classic Daytona presented by IMSA will be the first running of the race with a reformatted and expanded Run Group structure. The major change is the division of the original Group E into two distinct classes, each featuring modern but retired prototypes and GT race cars from this century.

Always an HSR Classic Daytona highlight, Group E is bolstered this year with a trio of Pescarolo Judd entries determined to beat three-time and defending winners Rogers Motorsports and its 2005 No. 38 Audi R8 LMP and co-drivers Andy Wallace, Doug Smith and James Gue.
Run Group E remains a showcase of such iconic machines as the Audi R8 LMP, Pescarolo Judd LMP, Peugeot 908 HDi FAP and Lola B07 LMP race cars that compete in the group with Daytona Prototype International (DPi), LMP2 race cars and others just past their prime.

The Pescarolo contingent includes the debuting 2011 No. 99 ERA Motorsport entry of Jamie Constable from Great Britain (pictured above). Two 2007 Pescarolos have also been entered from GMT Racing for Juan Gonzalez and Butch Leitzinger in the ex-Rollcentre Racing No. 18 and a similar Judd-powered No. 16 entry for Randy Johnson and Nick Boulle. Gonzalez and Leitzinger co-drove the No. 18 Pescarolo to a Run Group win in the HSR Classic Sebring 12 Hour in 2017 and now want an HSR Classic Daytona victory to go with it.

Group A – 1962 – 1972: The oldest and perhaps most memory-stirring division, Group A features legendary and early FIA-era prototype and GT machines that raced in international and world championship competition. The group has attracted race cars such as the Lola T70 and T165, Ford GT40 and several Chevron B8 and B16 models. Production-based cars of the era include an AC Cobra, Shelby Daytona Coupe, Shelby GT350, BRE Datsun 240Z and a strong lineup of early Camaros, Corvettes and Porsche 911s. Two entries of note are a pair of 1955 Mercedes-Benz 300SL Gullwing Coupes (pictured upper left below) from the Germany-based HK-Engineering team. Sports car racing legend Jochen Mass co-drives one of the classic Mercedes along with teammates Hans Kleissl and the sister-car duo of Christian Jager and Guido Haarmann.

Group C – 1983 – 1993: The prime of the GTP and Group C era is at the heart of this division that always draws a strong entry. Entries this year include the Lowenbrau HR1 and an ex-Kremer/Leyton House Porsche 962, a Jaguar XJR-5, March 83G (pictured right above), Nissan NPT90 GTP and a quick GTP "Camel Lights" Porsche Fabcar. For the first time in 2019, Group C will share the track with Group D competitors.
Group B – 1973 – 1982: Evoking the same emotion and memories of Group A with a little more turbocharged power and wide-body aerodynamics, Group B has attracted Porsche 935s and other Porsche 911-based models, BMW CSLs and some big-bore Camaros and Corvettes. Group B is also home to several ultra-quick and classic sports prototypes including a half-dozen Chevron B19, B26 and B36 models, a March 75 S and Toj SC204. A Group B highlight is the return of the big-block Classic Automotive 1979 No. 88 Greenwood Corvette (pictured bottom above) with French sports car driver Jim Pla.

Group D – 1994 – 2003: Historic but familiar, Group D has attracted a competitive mix of early Doran and Riley Daytona Prototypes and several big-bore Ford Mustang T/A, Oldsmobile Aurora, Saleen Mustang and Corvette C5R entries that will battle for production car honors with Porsche 944, 964 and 996 entries. An entry of note is the Classic Daytona return of Forest Barber in the same Bell Motorsports 2003 No. 54 Doran 2003 Doran JE4 he co-drove with Terry Borcheller, Christian Fittipaldi and Andy Pilgrim to the overall Rolex 24 At Daytona in 2004. Barber has owned the Daytona Prototype, which is entered for this year's Classic Daytona by Doran Racing, ever since that milestone victory.

Group E – 2000 – 2018: This well-supported group lets premier ALMS and Le Mans prototypes not eligible to race at Daytona in their prime a chance to take to the 3.56-mile high-banked road course. Two Audi R8 LMPs, the three Pescarolo Judds, a Lola B07/18 LMP, Dallara Oreca DO-05, Courage LC75 and Ligier JSP2 LMP2 car will do battle in what could be one of the closest and fastest races in "HSR Classics" history. The GT field is equally diverse with Lamborghini, Aston Martin, Mercedes-AMG, Porsche, Ferrari, Audi, Corvette and BMW all represented. An entry to watch is the GMT Racing 2007 No. 7 Peugeot 908 HDi FAP former group winner David Porter will be driving solo in the car's Daytona debut.

Group G – HSR Cars: Formerly competing as Group F, the new Group G division is home to HSR classes not represented in the other groups. Offering a mix of primarily production cars from six different decades of competition, Group G includes many of the same teams and race cars that compete in HSR's Vintage GT and Historic GT groups and the HSR Classic RS Cup and HSR Global GT series. Several different Porsche models from all generations make up the majority of the entries, but BMW, Mini Cooper, Aston Martin, Lotus and even a lone Subaru WRX STI are all represented. Other unique entries are Porsche 904 and Shelby Cobra recreations and the oldest American car in the race. The 1956 No. 57 Chevrolet Corvette (pictured below) of Dave Roberts is usually the oldest car at most race events, but this year it was edged by the debuting pair of 1955 Mercedes-Benz 300SL Gullwings in Group A. Roberts co-drives the Corvette with Martin Lauber and legendary NASCAR team owner and engineer Ray Evernham, a team that is combining to field an entry in all Classic Daytona Run Groups for the second-straight year.

Group F – 2000 – 2018: Group F has been revamped to showcase modern Prototype and GT race cars a few years removed from some of their Group E counterparts but just as attention-grabbing on the DIS high banks. The division is now home to a strong entry of the popular Oreca FLM09 Le Mans Prototype Challenge (LMPC) "PC" cars and Gen 2 and Gen 3 Daytona Prototypes "DP" cars no longer eligible for current IMSA competition. Both classes will compete against recently retired LMP2 cars of the same era, including an Oreca Judd. The GT field is just as strong with a solid entry of Porsche 993, 996, 997 and Caymans taking on Corvettes, Camaros, a BMW Z4 and even a second-generation Ford GT Mk7. A local entry of note is the JC Racing LLC 2015 No. 9 Corvette Daytona Prototype (pictured above) owned and driven by lifelong Daytona Beach resident JC France, who with co-drives with Tim Jernum and three-time Rolex 24 At Daytona winner Joao Barbosa.

The HSR Classic Daytona debuted in 2014 at the "World Center of Racing" and the immediate success of the inaugural event called for a second running in 2015. After a year off, the 24-Hour Classic Race on the 3.56-mile DIS road course returned in 2017 and is now an annual fixture on the HSR calendar.

A competitor test day on Wednesday, November 13, kicks off the 2019 HSR Classic Daytona presented by IMSA. The full-day test sets the stage for the following four days of official competition that culminates with the classic 24-hour race from Saturday, November 16, at 2 p.m. EST straight through to the final checkered flag 24 hours later on Sunday, November 17.