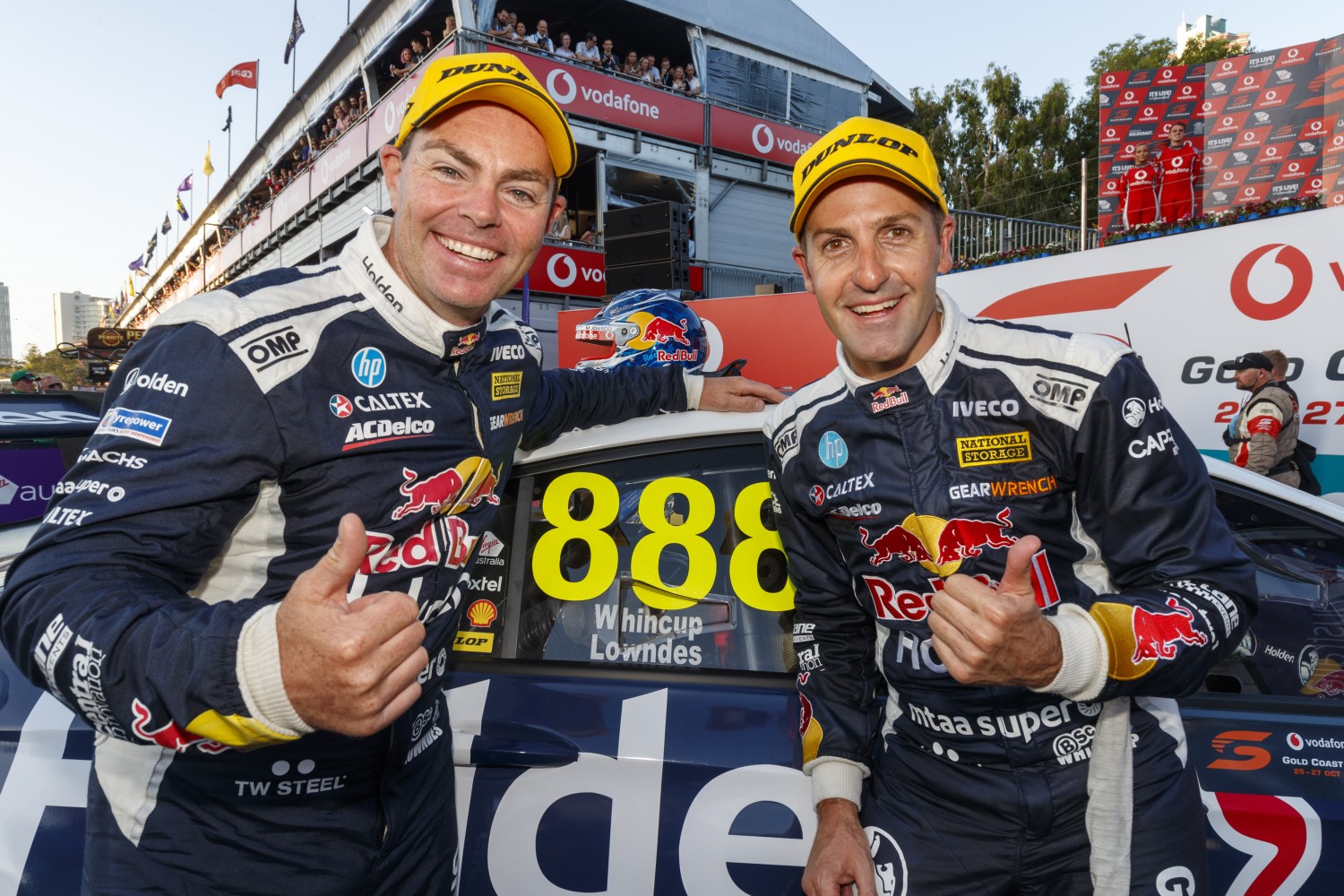 The two greatest drivers in the Supercar era, Jamie Whincup and Craig Lowndes, have today claimed victory in the opening race of the 2019 Vodafone Gold Coast 600.

Lowndes wound back the clock to leap in front of Bathurst winner Alex Premat at the crucial race start and opened up a healthy lead for Whincup, who was able to lead the field home for his 115th career victory and Lowndes 108th trip to the top step of the podium.

The win was Whincup's second win of 2019 and 9th in his hometown. For Lowndes it was win number four on the Gold Coast and first on this circuit since 2013.

“CL did an amazing job to get us the lead of the race and a nice buffer," said Whincup.

“I thought we were in a little bit of trouble there with that late Safety Car, but the car was good, we had pace, I couldn’t be happier."

"I had to get Alex off the line because otherwise it was going to be a long stint," Lowndes said.

Alex sort of put a bit of pressure early on and then we sort of seesawed a bit, then in the end we were able to drive away from him and give Jamie a five second lead.

I only had half an hour run before we got into the race, so luckily I haven’t forgotten how to start a car.

It was a Red Bull Holden 1-2 with Shane van Gisbergen overtaking Scott McLaughlin on Lap 88 to mean he and Garth Tander finished second, while McLaughlin and his Bathurst-winning co-driver Alex Premat held on for third.

"Garth set us up well, ran a bit longer and that helps us at the end, we got that tire advantage, couldn’t use it but that’s all good," said van Gisbergen.

"We all love the track, the great thing is that straight after every session we’re all in there looking at each other’s vision and each other’s data, all driving each other to go faster and really enjoying it," said Tander.

It was Triple Eight's 13th win since 2005 on the Gold Coast, continuing the Brisbane-based teams record of success on the streets of Surfers Paradise.

"Just didn’t quite have it but these guys were first-class all day so congrats on the one-two," McLaughlin said.

"We’ve got a little bit to work on tonight, we’ve got a fast qualifying car so we should be able to start at the front and hopefully if we can have a good race car and be better on those tires we should be right."

There were plenty of thrills and spills on the streets of Surfers Paradise, with a number of drivers having close calls through the concrete canyon, including kiwi Andre Heimgartner, who spun at high-speed after being bumped by local favorite James Courtney.

Chaz Mostert and James Moffat didn't start the race after Mostert crashed heavily in the Supercheap Auto Mustang in the Top Ten Shootout.

Behind the top three finishers, Cam Waters and Michael Caruso who were quickest in yesterday's practice were 4th in the Monster Energy Mustang while Scott Pye was fifth ahead of Lee Holdsworth, Will Davison, Tim Slade, Fabian Coulthard and Nissan's Rick Kelly who finished tenth.

There will be another round of ARMOR ALL Qualifying tomorrow morning and the fan-favorite Top Ten Shootout, while the final 300km race of the weekend will begin at 3:00pm local time.