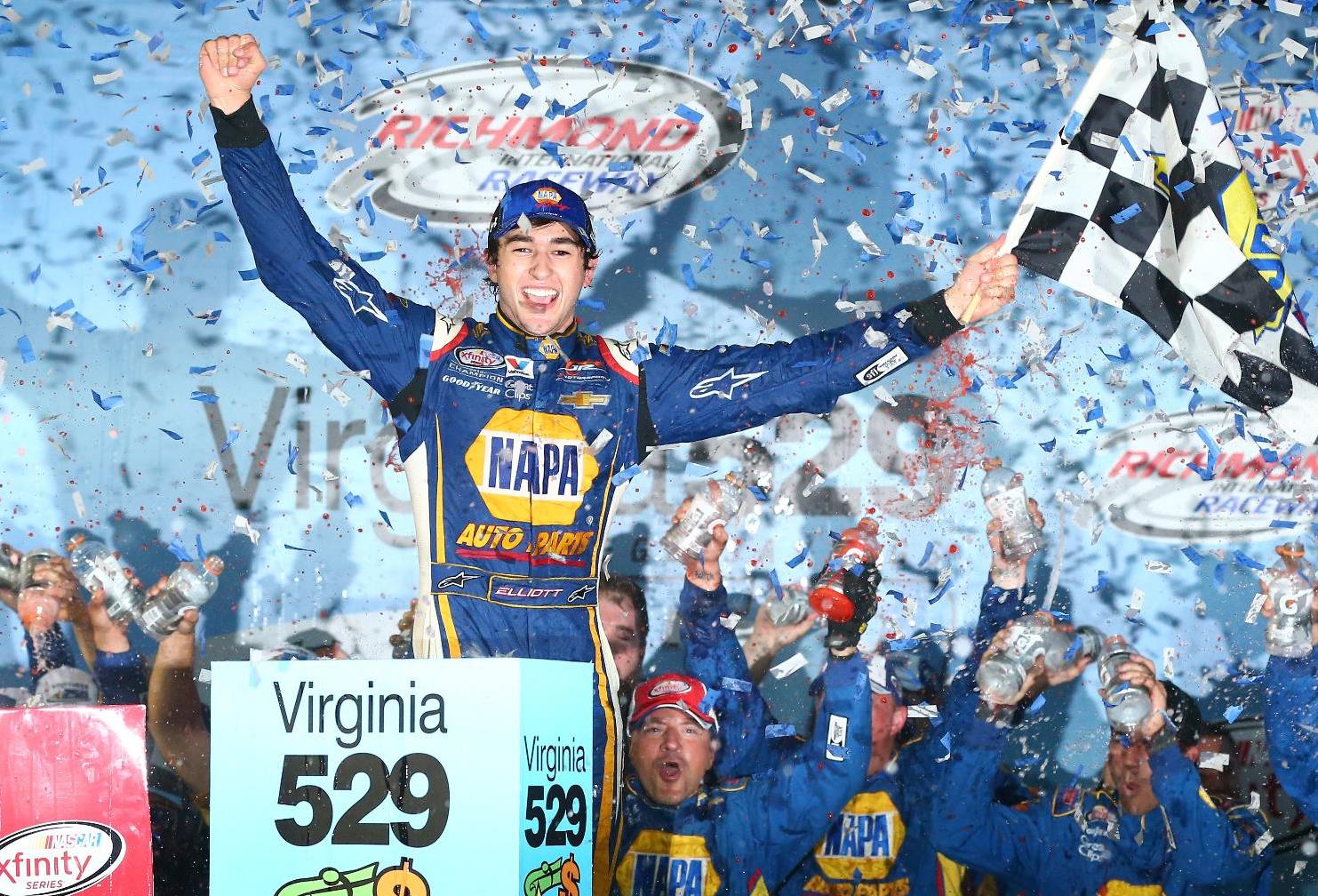 Chase Elliott broke through to record his first win of the season as the defending Xfinity Series champion too the checkered flag in Friday night's Virginia529 College Savings 250 at Richmond International Raceway.

Elliott led the final 83 laps and held off a strong charge by perennial Xfinity favorite Kyle Busch to snap a 39-race winless streak with his fourth career series win.

Elliott's victory helped him tighten up the lead on points leader Chris Buescher, moving him to second in points, just 21 behind the leader the championship battle.

"I'm just super excited to be back in Victory Lane," said Elliott. "I had a couple of chances (to win), and things just didn't go our way. I can't say enough about our pit crew tonight – they're the ones who really gave us the chance to go win this race. The pit stops were by far the best they've been all season, they just did a killer job. "

Elliott's victory was the first by an Xfinity Series regular at Richmond since Kyle Busch won back in 2004, a run of dominance by the Sprint Cup regulars spanning 22 races.

"I've run second to Kyle here last year, so I know how it feels," said Elliott. "You're doing the best you can and they're doing the best they can they have an awful lot of experience. Any companion weekend where you can go and run with Sprint Cup guys and have an opportunity to outrun them…that definitely feels good."

[adinserter name="GOOGLE AD"]Elliott led a race-high 83 laps and kept his car in the top five all night, but didn't take over the top spot until 168 laps in, when he beat his teammate Smith off pit road. Elliott then quickly overtook Ross Chastain for the lead and started to pull away.

Ryan Truex's crash with 25 laps to go set up the final run to the checkers with Elliott bringing the field to pit road for their final stops. Elliott's crew got the no. 9 NAPA Chevrolet out first ahead of Smith, Scott and Busch for the final restart.

Back under green, Busch shot to the outside around Smith and looked to make a move on Elliott for the top spot, but Elliott held him off and began to pull away.

With Elliott checking out on the field, the battle for third place heated up with Scott, Logano and Jones getting past Smith who faded to sixth in the final laps.

Busch's runner-up finish was his second straight following last week’s race at Darlington. Busch has racked up seven straight top-five finishes since returning from injuries he suffered in the season-opening race at Daytona.

"We were pressuring the 9 (Chase Elliott) trying to get by him seeing what we could do there but in the end just those guys were pretty good. We had to play catch up much of that race but right there at the end we kind of caught up but still not enough," said Busch. "I don't know if I would have got the lead, if I could have got away I think Chase (Elliott) was still too good. We fought hard and we came home a close second I guess."

Berry challenged the leaders early in the race and at one point moved up to challenge Brian Scott for the lead, but was done in by several slow stops on pit road that cost him 12 positions over the final 85 laps.

Berry, a stand-out late model driver, was making his only series start driving for JR Motorsports in a car usually campaigned by Kevin Harvick and team co-owner Dale Earnhardt, Jr.

"That was an awesome run. Just needed to better in restarts, need to do better on pit road and I think we would have had a real shot of winning that race," said Berry. "I did not expect us to be that good I felt like a top 10 was definitely possible, but to have a shot at a top five or a win, that was a crazy race. This whole day, I can't believe we had as good a run as we did. I really, really wish we didn't have that last caution, I think we could have had a shot to shock some people. I'm tickled to death about how we ran.

"I sure hope I helped (my cause) tonight. I'm just a short-track racer at heart, so tonight played into my favor."

Ty Dillon finished seventh and fell one spot to third in the point standing, trailing Elliott by six points. Austin Dillon was ninth, followed by Buescher.