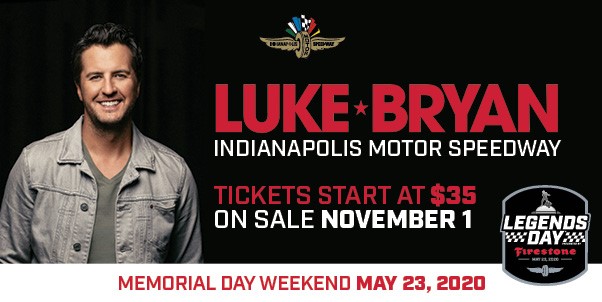 Award-winning country music superstar Luke Bryan will headline the Firestone Legends Day Concert on Saturday, May 23, the day before the 104th Indianapolis 500 presented by Gainbridge.

The concert, which also will feature additional acts to be announced, starts at 3:30 p.m. on the Firestone Stage inside Turn 4 of the IMS oval.

General admission tickets start at just $35. A limited number of concert pit tickets are available starting at $75. For the first time in 2020, a limited number of tickets in a new temporary grandstand are available starting at $115, including concert pit access. A very limited supply of exclusive VIP platform tickets also is available for $250, including pit access, snacks, two complimentary drinks and dedicated bars. Ticket prices will increase as the concert draws closer, so fans are encouraged to buy now.

All concert tickets include admission to the concert and all Legends Day presented by Firestone activities that day at IMS, including autograph sessions with current and past Indianapolis 500 drivers, the 104th Indianapolis 500 presented by Gainbridge public drivers meeting, historic race car laps and more.

"The Firestone Legends Day Concert continues to attract the top names in country music every year, and 2020 will be no exception with Luke Bryan headlining the show," IMS President J. Douglas Boles said. "Luke's high-octane performances will charge up our fans for Race Weekend, and we know they'll sing along with hit after hit. This show will be a perfect match for 'The Greatest Spectacle in Racing.'"

This will be Bryan's second concert at IMS, and first in a decade. He performed as a rising young talent in the Pagoda Plaza on Brickyard 400 weekend in 2010. Since then, Bryan has emerged as one of the biggest stars in the history of country music.

He has more certified digital singles than any other country artist, with 46 million tracks and 12 million albums with 4 billion music streams. Bryan has now placed 23 singles at No. 1, 12 of which he co-wrote.

In May 2019, Bryan launched his "Sunset Repeat Tour" with special guests Cole Swindell and Jon Langston and played for 50,000 fans during its opening weekend. He followed that success with a sold-out show in Boston's Gillette Stadium, bringing his career headline stadium concert tally to 35.

As the Official Tire of Country Music™ and the Official Tire of the Indianapolis 500, Firestone has served as the presenting sponsor of Legends Day since it debuted in 2014. The partnership brings together two platforms – racing and country music – that have played significant roles in the rich history of the time-tested Firestone brand.

The 104th Indianapolis 500 presented by Gainbridge is scheduled for Sunday, May 24. Tickets are on sale now at IMS.com or by calling or visiting the IMS Ticket Office.