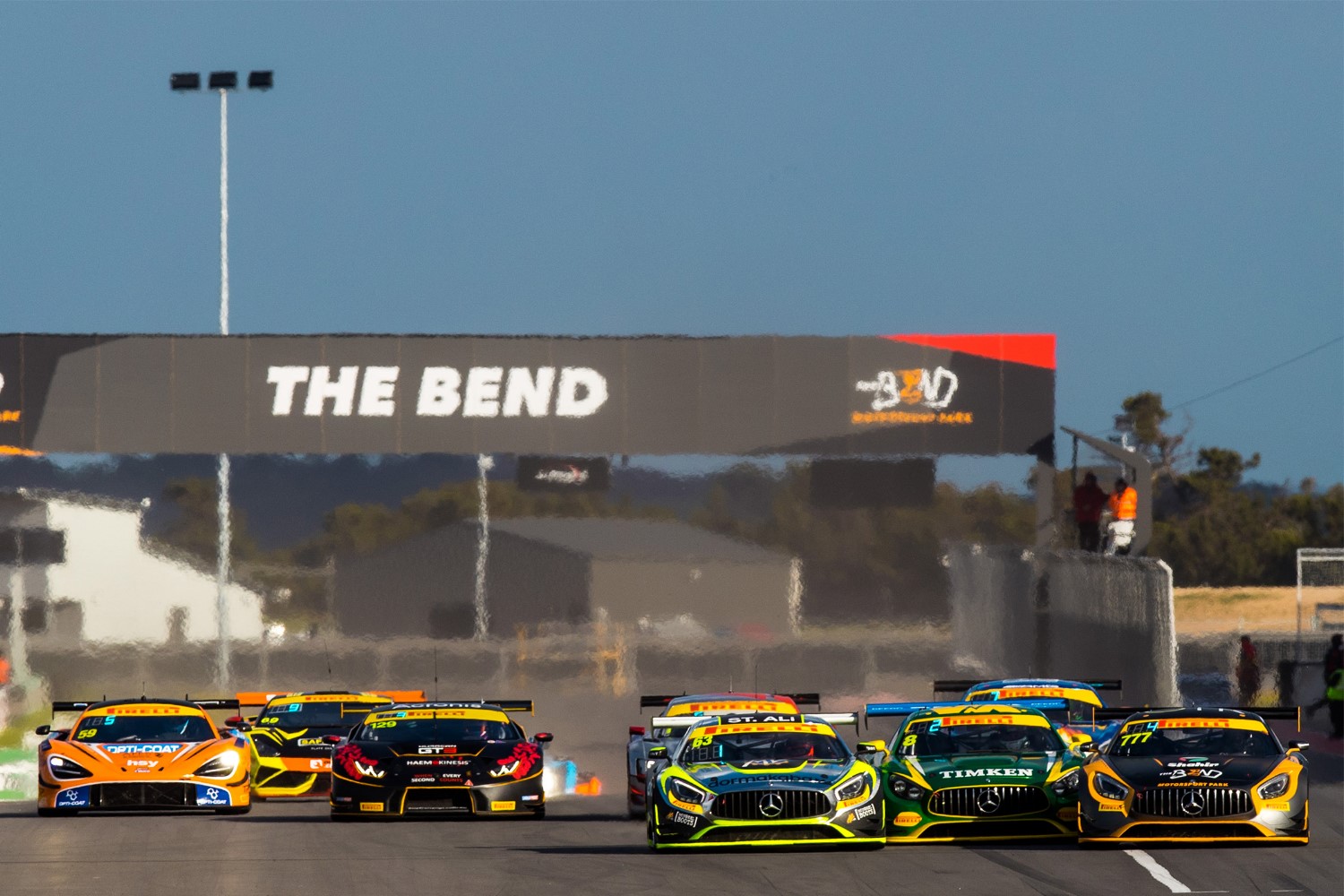 Like Sandown last month, there is a fantastic battle brewing for the 2019 title, with Emery holding a strong points lead on the series return to the demanding 2.98-kilometer, 15-turn Surfers Paradise street circuit, a circuit at which he will be need to call on experience he gained in a V8 Ute all the way back in 2005, whilst title rival Peter Hackett has enjoyed more recent success, with a pair of podium finishes in an Erebus Motorsport Mercedes-AMG SLS in 2012.

The pair though won’t be alone this weekend, with former Australian GT race winners Fraser Ross, Tony Quinn and Ryan Millier all expected to take the fight to the title contenders, all three returning to the series after strong runs during the season’s other street circuit event – the Melbourne Grand Prix.

Ross will likely be the threat for an outright win, with Emery and Hackett conscious of their points. Having missed Perth waiting for the team’s new McLaren 720S GT3 to arrive from the UK, Ross sat out for round two, but he showed across the Albert Park weekend, then again during the endurance championship, that he is an outright threat any time the 59Racing machine hits the circuit.

With his more recent experience on the Gold Coast circuit in Carrera Cup (2015/2016), and his ability to muscle the McLaren around tight circuits, Ross will be one to keep an eye on this weekend. The team too are also intent on making amends for a late retirement from the recent Sandown enduro round whilst in the box seat for victory.

Tony Quinn loves a street circuit, and the popular Scotsman will make a welcome return to AGT campaigning his trusty Aston Martin Vantage V12 GT3, a car he campaigned at both the Grand Prix and Phillip Island rounds earlier in the season, and a car in which he contested a round of the South Island Endurance Series at ‘home’ recently at Highlands Motorsport Park in New Zealand.

Ryan Millier makes his return to the Trofeo Motorsport team campaigning the Lamborghini Huracan GT3 that Liam Talbot and Shane van Gisbergen took to victory at The Bend Motorsport Park earlier in the year, the Victorian always a strong addition to the field, his reputation buoyed by his starring role in Christopher Mies’ 2015 title victory for Audi in the absence of the injured Geoff Emery.

The GT4 category will see the continuity of the title fight between the M-Motorsport team-mates, with newly crowned endurance champions Justin McMillan and Glen Wood looking to complete the 2019 double in the mighty KTM X-Bow GT4. They hold a strong points lead over Vantage Racing’s David Crampton and Trent Harrison, although you could expect the battle to intensify this weekend, with wins now the focus for both teams as much for bragging rights in their internal team battle as championship points..

They won’t have it all their own way though, with AGT rookie Todd O’Brien debuting his Ginetta G50 GT4, the local driver hoping to put his past experience in an Aussie Racing Car on the streets of the Gold Coast to good use, although he is likely to have a battle on his hands with KTM’s Glen Wood who is arguably the most experienced driver in the field on the Gold Coast streets, having taken a trio of top seven finishes at the venue last year in Carrera Cup.

The return of the sprint format also sees the re-ignition of the title battles in Trophy Series and Trofeo Challenge, whilst the Invitational category will also see a great fight develop between some impressive rising stars campaigning the locally built MARC Cars.

Currently the Trophy Series is being led by Victorian teenager Ryan How, however the Audi driver has been forced to miss the Gold Coast event after suffering significant damage during the Barbagallo round of the season, a brake failure whilst leading the final race outright forcing him into the barriers, and despite the best efforts of his team and supporters, he has been unable to prepare the car ahead of the penultimate round.

That provides title rival Dale Paterson with an opportunity to firm his favoritism in the thundering 7.9-liter Chevrolet Camaro GT3, a car that is a big fan favorite and after his round victory at Barbagallo, he sits well within striking range of How’s lead, although he’ll be mindful he needs to be fast and precise with the experienced Richard Gartner third in points in the Safe-T-Stop Lamborghini Gallardo R-EX.

Gartner won’t be the only Gallardo in the field, local driver Peter Corbett will make his Australian GT debut in an identical R-EX, the Queenslander looking to build on some recent state series successes, the trio though will need to keep one eye on the mirrors though with Joseph Ensabella back in his Type 997 Porsche GT3 Cup Car after a podium result in the Trofeo Lamborghini Huracan last time out at Sandown.

Another Porsche that will make its presence felt, will be Trofeo Challenge points leader Nick Karnaros in the Earth Electrical Type 991 Cup Car, the Victorian looking for a solid result to put the maiden championship for the one-make challenge cars out of reach heading into the final round at home at Sandown in early-November.

The Invitational MARC Cars will also give the fans plenty to celebrate across the two 60-minute sprint races over the Gold Coast weekend. Manufactured nearby at Norwell, the V8-powered prototype GTC cars will see them reunited with the GT cars as they are annually at the Bathurst 12 Hour.

Leading the charge for the MARC Cars will be recently crowned Super 3 champion Broc Feeney. The youngest ever Supercars champion (who recently turned 17), will pilot a MARC 1 Mazda alongside fellow local, 16-year old Bayley Hall in a similar MARC 1 Focus. MARC cars regular and Gold Coast local Geoff Taunton will campaign a MARC II Focus as will Adam Hargraves.

Seven years ago during Australian GT’s last visit to Surfers Paradise it was champion-elect Klark Quinn who emerged as the round winner during the two 30-minute races across the Gold Coast 600 weekend, the Porsche driver claiming pole position before going on to win both races and ultimately the first of three AGT crowns.

The race lap record though was set by a storming Allan Simonsen in the Maranello Motorsport Ferrari 458, the Dane setting the mark at a 1:12.3766 in the second race as he fired through the field to chase down the leaders – he and Nick O’Halloran ultimately falling two laps short of a finish after a suspension failure whilst running fourth.

Early weather predictions for the Gold Coast event suggests fine conditions across all three days with temperatures in the range of 16 to 25 degrees but with the possibility of strong winds during Saturday’s opening race.