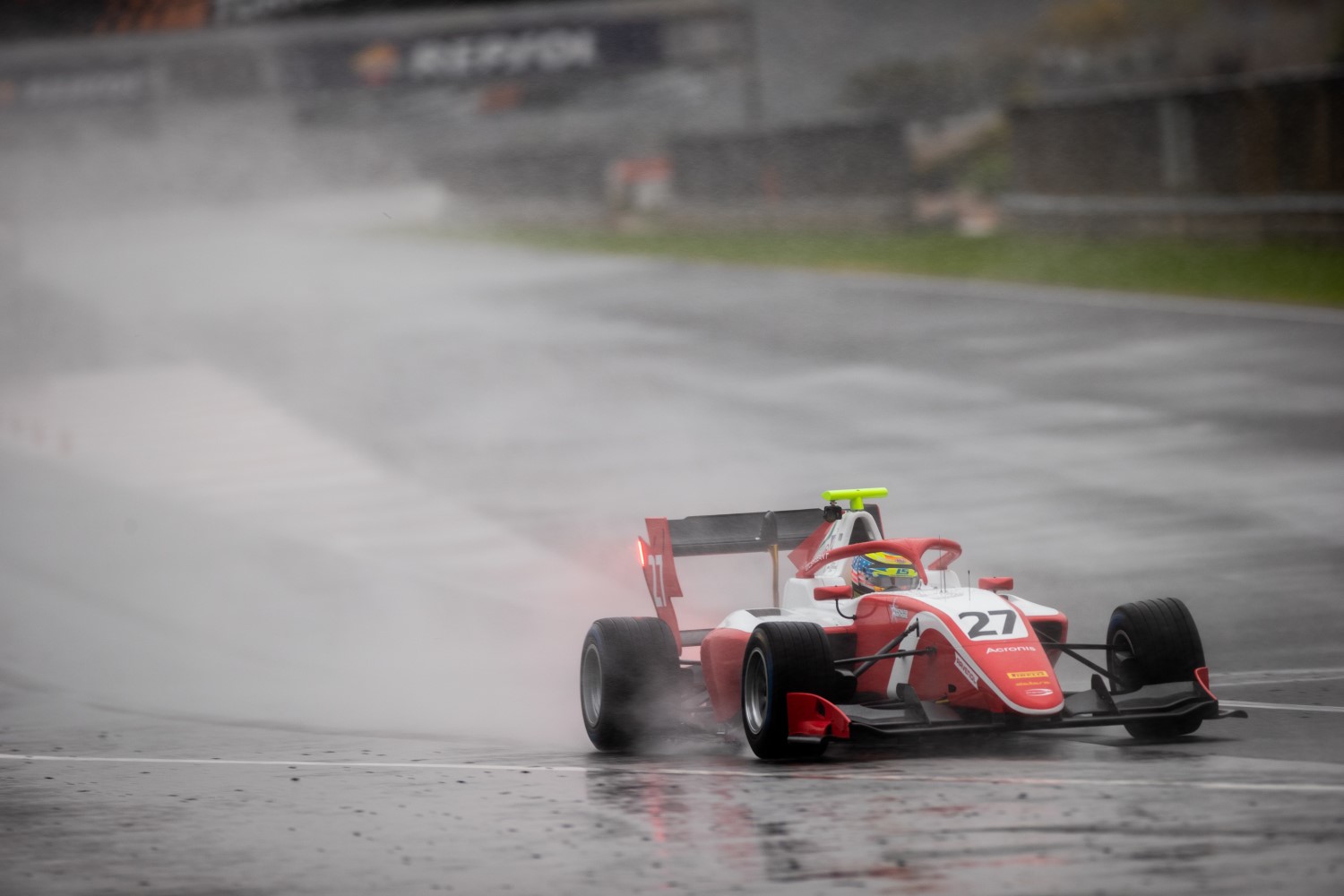 Logan Sargeant topped a rain-hampered final day of post-season testing in Valencia, lapping the Circuit Ricardo Tormo in 1:33.705 in the morning session, to finish ahead of Day 1 and 2 leader Christian Lundgaard.

The PREMA Racer – who sat out Day 2 of testing – settled nicely in to Championship winning machinery and confidently topped both the morning and the afternoon session. Lundgaard, who finished second overall on the final day, was the quickest man across the three-day stint.

The morning began under heavy rain, with cars forced to adopt their wet tires as they headed out. Dennis Hauger was the first of five to hit the track, with Simo Laaksonen, Devlin DeFrancesco, Max Fewtrell and Andreas Estner all firing out at the first opportunity.

Of those five, it was Estner who set the pace on his first appearance in Valencia this week, running 0.246s ahead of Fewtrell. The Hitech Grand Prix racer switched it up a notch and sliced a heavy ten second chunk off his time to take lead shortly after though.

Ferdinand Habsburg, David Schumacher and Dan Ticktum all took trips into the gravel in the opening hour, as the wet conditions tested the driver’s handling around the Circuit de Valencia. Fewtrell continued to lead the session, improving his time to 1:34.844 ahead of fellow Renault junior Lundgaard.

With just 30 minutes to go, Sargeant put the power of his Championship winning machinery to the test, flying around the rain-hampered track in 1:34.309 for P1. He was briefly usurped by Lundgaard, but the PREMA man drew more pace from his car to return to the peak, with a lead of 0.127s.

With the session drawing to a close, the American ace improved for a third time to beat Lirim Zendeli’s wet time from Day 1 by 0.014s. Behind him sat Lundgaard and Jake Hughes, as the cars dipped back into the garage for lunch.

The rain only increased during the break, but that didn’t stop Igor Fraga and Joao Viera heading back out in the Sauber Junior Team by Charouz machine, with the former setting the afternoon standard at 1:38.732.

Zendeli – who had swapped Jenzer Motorsport for Trident on Day 3 – toured fastest when he returned to the track, breaking the 1m 38s barrier, ahead of Ticktum and Billy Monger.

David Vidales lost control of the Campos at Turn 10, which brought a brief halt to the session. When the teams got underway once more, Carlin raced round to take 1-2-3 in the standings, with Ticktum leading Clement Novalak and Monger.

Having spent a lengthy period in the garage, the morning’s quickest man, Sargeant, took control of the afternoon when he returned onto the circuit. The PREMA man smashed the 1m 36s barrier by two seconds to return to the top of the timings once more.

The American’s fastest lap was sandwiched between red flags for Lundgaard, Fraga, Monger and Novalak, as the slippery surface began to take it’s toll on the drivers.

Sargeant wouldn’t be beaten as the cars made the most of the final half an hour of testing, confirming his place at the top of the times on the final day, ahead of Lundgaard and teammate Frederik Vesti.

This concludes the official 2019 FIA Formula 3 season. The teams will regroup in Macau next month for the prestigious FIA F3 World Cup – a stand alone event.

Our next stop will be the first pre-season test of the 2020 season, with dates and location to be revealed soon.