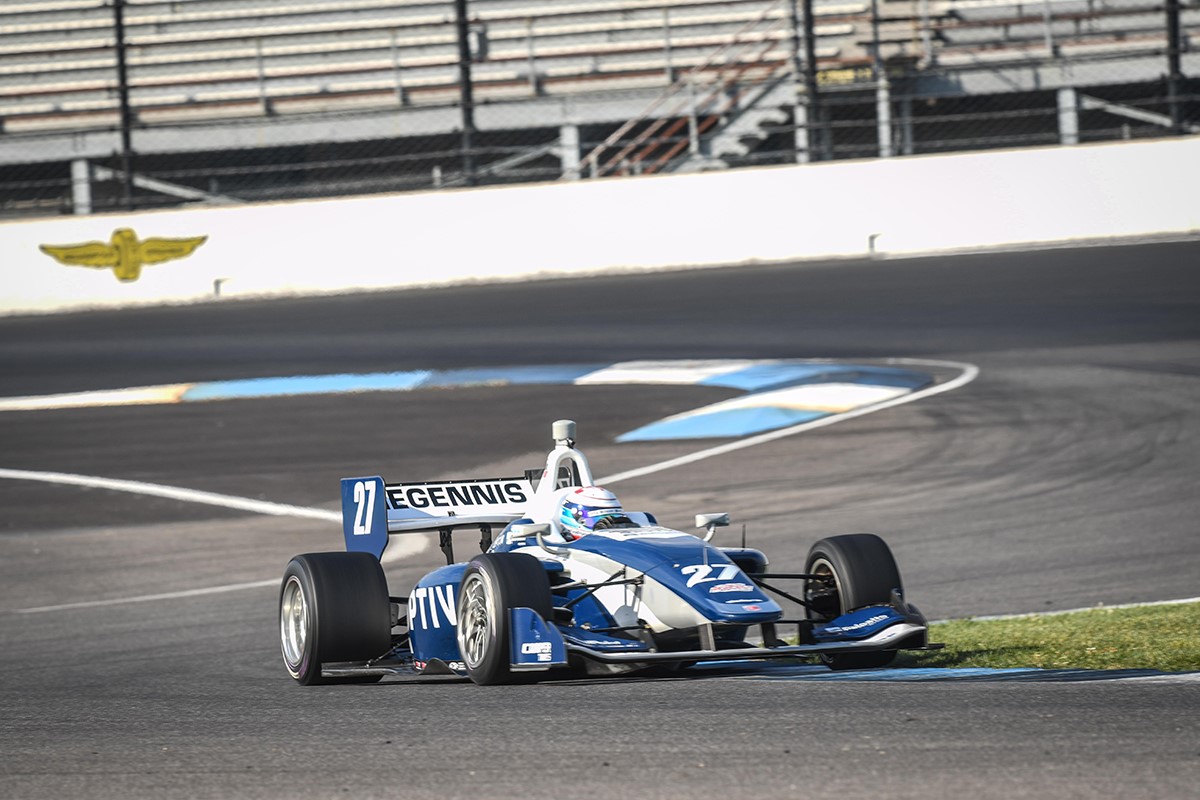 A total of 44 drivers from 12 different nations turned well over 4700 laps between them over the two days, representing all three levels of the Road to Indy Presented by Cooper Tires, with the majority of fastest times being set this morning.

Rinus VeeKay, from Hoofddorp Netherlands, set the pace for Belardi Auto Racing in Indy Lights Presented by Cooper Tires, while this year’s USF2000 championship runner-up Hunter McElrea, from New Zealand, continued to display his ability by stepping up to the Indy Pro 2000 Championship Presented by Cooper Tires Tatuus PM-18 for the first time and posting the fastest time for Pabst Racing. Christian Rasmussen, from Copenhagen, Denmark, was the benchmark in the Cooper Tires USF2000 Championship for Jay Howard Driver Development.

VeeKay Continues to Set the Pace in Indy Lights
After finishing second in this year’s title-chase with Juncos Racing, Dutch phenom VeeKay remained perfect over the weekend in Indy Lights as he continued to work with proven race winning team Belardi Auto Racing. Fastest in all six 45-minute sessions, VeeKay, 19, turned the fastest lap of the test this morning at 1:15.4790, an average speed of 116.329 mph, fractionally better than his 1:15.4795 from yesterday.

A quartet of drivers from Andretti Autosport also improved their pace today after chasing VeeKay in every session, with Robert Megennis, from New York, N.Y., emerging second fastest with a best lap of 1:15.7778.

“It was great to be back at IMS," commented Megennis. “I really do love this track. It’s Indianapolis, so there is something special about it, and having it be where my first Indy Lights win took place, it really made it even more special. I have really enjoyed being at the Chris Griffis test this weekend. I was able to focus on my driving, I definitely learned some news things and improved throughout the test. We tried some different things out with the car and made improvements there. All in all, a successful test and huge thanks to the team for the effort this weekend."

“It was difficult to adapt to the way the car works and handles," said Orudzhev. “The Indy Lights car is a new car to me and took some getting used to. We have been learning every session on track. Yesterday, we were one second off of P1 (within the team) and today we were two tenths. Overall, today was a promising day and yet we still have a bit more to gain."

Singapore’s Danial Frost rounded out the small field present for the Indianapolis test, although both HMD Motorsports and Exclusive Autosport, which recently confirmed plans to field entries in 2020, are among several outfits expected to take part in the next scheduled series test at Sebring, Fla., in December.

USF2000 Aces McElrea, Eves Shine in Indy Pro 2000
Some idea of the level of intensity to be expected in next year’s Indy Pro 2000 Championship was gleaned from this weekend’s test, with the top drivers all posting times within a half-second of each other. Intriguingly, it was a trio of rookies and USF2000 graduates – Hunter McElrea, Colin Kaminsky and Braden Eves – who played the starring roles, with Canadian Parker Thompson the only Indy Pro 2000 veteran interloper after being drafted in by the DEForce Racing team.

“This is surreal, actually," declared 19-year-old McElrea. “I was quickest at this test last year in USF2000 and that really put me on the map going into the (Road to Indy) Shootout (which McElrea won to secure his drive in this year’s USF2000 Championship) – and now, I’m here a year later topping the Indy Pro 2000 test. It’s a credit to Augie Pabst and everyone at Pabst Racing. They let me have a go at this car to prove what I can do, and what they can do as well. For a rookie team in this series to come out of this test one-two, you can’t get any better than that. The car was amazing straight out of the box and I was in the top three in every session I did, with a race run at the end to feel what the car is like in race trim. That was definitely a highlight of the weekend. It was a lot of new things to adapt to, but the Road to Indy has done a great job in making it a big step from USF2000 but a smooth one in terms of gaining confidence. Now I have to work hard to be on the grid next year, but hopefully this helps."

“We just had one quick shakedown of the new car before we got here, just to get a feel for it," added Kaminsky. “Going P1 yesterday in the first session was really cool, since we didn’t know what to expect coming in. The Pabst Racing crew is amazing in what they can do with the USF2000 car and we didn’t know if that would transfer over, but they put together a fantastic car. I didn’t know what to expect with the added horsepower, downforce, wings and tires, but it ended up being an uncanny transition between the cars. I thought it would feel foreign, but it felt so similar. It was great to go one-two with Hunter, it’s a fantastic start. We’re working to put something together for 2020 and we’re really excited."

Thompson, from Red Deer, Alb., Canada, ended the weekend with the third fastest time, 1:19.6035, fractionally ahead of recently crowned USF2000 champion Eves, from New Albany, Ohio, who had been fastest of all yesterday for Exclusive Autosport (1:19.6386), and today was on top of the time charts in each of the final two sessions – held in warmer conditions – at 1:19.6752 for RP Motorsport USA, which guided Kyle Kirkwood to this year’s championship.

“I went quickest in three of the six sessions with two different teams, so that was great," concluded Eves. “Whenever you switch cars, there are minute differences with things like pedal placement to get used to, along with different setups, so there are some things to adapt to. We made progress with each car and got a lot of laps in. It was a very productive test. I grew a great deal as a driver and I got to know two great teams. It will be interesting going into the off season with decisions to make, but being the champ gives me a lot of confidence going into next year. We’re flat out working toward another championship in 2020."

Manuel Sulaiman, from Mexico City, also was within a half-second of the fastest time aboard a second DEForce Racing entry.

Rasmussen Remains Perfect in USF2000
Danish ace Rasmussen carried on today from where he left off yesterday by completing a clean sweep of the weekend for Jay Howard Driver Development. Rasmussen, 19, didn’t quite match his best time from the second session on Saturday, when he posted a best of 1:24.9311 for the 2.439-mile road course, an average speed of 103.383 mph, but he remained the only one among 17 drivers to dip underneath the 1:25 barrier during the weekend. Rasmussen’s fastest time this morning was 1:24.9540.

“To be quickest in all six sessions really adds to our confidence going the 2020 season," he said. “We didn’t have the best race weekend here this year so it’s very cool to go back and do a good job here this weekend. We gained so much data that we can use at all the races, working on setups: we did qualifying simulations, race simulations, everything.

“It’s amazing to get the opportunity to test this much here at IMS – it’s an amazing place to be, with all the history here. I’m very happy with the weekend; we have a really strong car now. There will undoubtedly be more new drivers coming into the series before the first race but this is a big confidence booster. We have to keep working at it, the same as we would if we hadn’t been this fast, and we’ll work at being this fast come next year."

Yuven Sundaramoorthy, 16, from Oconomowoc, Wis., came closest for Pabst Racing, marking a significant improvement this morning by recording the second fastest time of the test at 1:25.0542, merely 0.1002-second shy of Rasmussen’s best in the same session.

“This is a big confidence booster, to come here and do as well as I did," said Sundaramoorthy. “Clearly, we still have some work to do to get to the top step but the team did a great job. It’s nice to come back here and see our development this season. Back in May, I was afraid to carry speed through the corners; now I’m able to do it with a lot less worry, with less early braking. I learned a lot this year, not just from Hunter (McElrea)’s championship run, but having him, Colin (Kaminsky) and Bruna (Tomaselli) there, coaching me. Their input really helped. It was good to see all that feedback at work this morning, setting my quick time of the weekend in the first session – and in front of (Indy 500 winner) Alexander Rossi, who was here to offer me encouragement. So thanks to Alexander and everyone at Pabst Racing, ST Motorsports, my family and friends for getting me here."

“This is my second time in a USF2000 car and I like it a lot," said Porto. “There are so many good drivers here, so I am happy with my times. I learned so much this weekend ahead of the 2020 season, since I intend to be in the series next year. This is such a fun track, I’ve driven it a lot on the simulator – it’s slower on the simulator, but the grip and the braking points are similar. Six sessions was a lot, I really learned a lot about my style of driving and did a lot of setup work with the team. I need to do different things to drive this car as opposed to the F4 car and this weekend really helped me to do that."