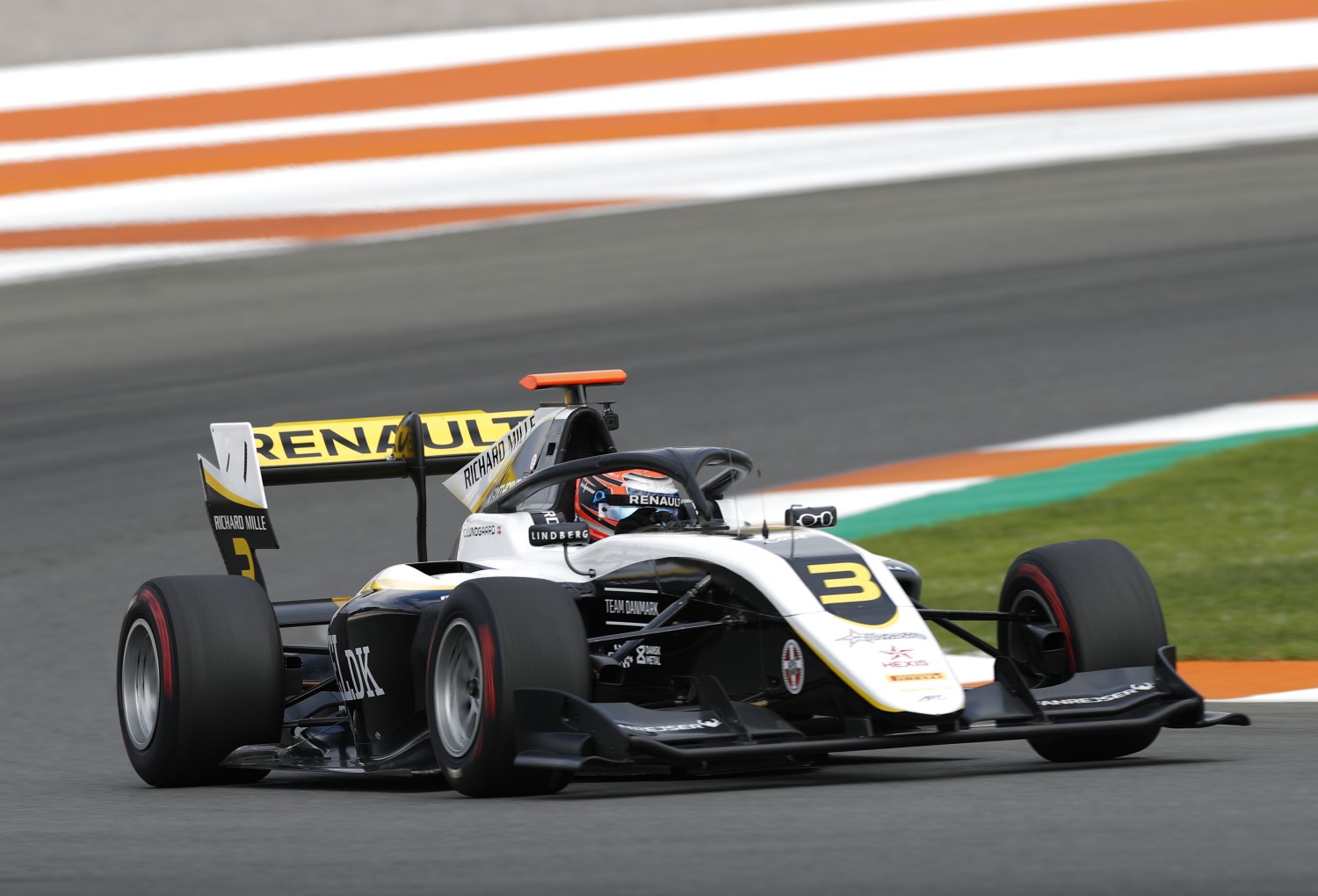 Christian Lundgaard left ART Grand Prix with plenty to be pleased about on Day 1 of post-season testing in Valencia, topping the times with a slick 1:21.370. The Dane ran narrowly ahead of his teammate, Sebastian Fernandez, who finished 0.229s slower. Backing up the ART duo was Alexander Smolyar, who impressed on his debut with Sauber Junior Team by Charouz.

Lirim Zendeli, in his maiden appearance for Jenzer Motorsport, set the pace during a wet morning with 1:33.719, and the German impressed once more in the second stint, finishing fourth in the dry.

Dark clouds loomed above the Circuit de Valencia ahead of the morning’s session and rain began to fall onto the track as the lights went green. 27 drivers headed out in the opening few minutes, but opted against setting a lap time, instead focusing on getting a feel for the damp conditions.

Once track conditions had been evaluated and the cars assessed once more, Jenzer Motorsport sent Lirim Zendeli out to see what he could do in his new machinery. The German wasn’t at full throttle, but still managed to set the standard at 1:39.627, in the wet Pirelli compounds.

The remainder of the 30 drivers followed suit and Dan Ticktum set about giving Zendeli a run for his money, bettering his opening time by more than 5s. The Jenzer driver improved to 1:35,543, but had to settle for P2, ahead of Linus Lundqvist.

Ticktum ran through 13 more laps in the opening hour and continued to top the timings, as Jake Hughes, Smolyar and Richard Verschoor all leapfrogged Zendeli in the standings.

Smolyar was impressing on his debut for Sauber Junior Team by Charouz and punched in a faster tour than Ticktum on his 21st lap, breaking the 1m 40s barrier. He was swiftly toppled by the day’s initial pacesetter though, as Zendeli returned to P1 with a time of 1:33.719.

The track began to dry as the morning session came to a close, but the cars persisted with the wets as damp sections remained, and the German on top wouldn’t be beaten in the tricky conditions. Backing up the Jezner man was Smolyar in second and Ticktum in third, while Hughes and Lundgaard completed the top five.

The track had dried by the time they returned in the afternoon and the 30 drivers quickly switched to the soft compounds, but resisted the urge to head straight back onto the track, instead putting further time in on the cars in the garage.

When they did began to feed onto the circuit 20 minutes later, Smolyar continued his impressive vein of form, setting the benchmark at 1:23.583. Zendeli would eventually whittle his own time down and edge ahead of the Russian, beating him by a narrow margin of 0.180s.

From thereon in, the times began to tumble. Jonathan Hoggard initially stole the lead, before ART duo Lungaard and Fernandez ran ahead by breaking the 1m 23s barrier. They were swiftly displaced by the PREMA of Logan Sargeant, before Verschoor handed MP Motorsport a turn on top.

With time running out, David Beckmann had a stint in P1 with Trident, before Zendeli took his place back out in front. It looked as if it would remain this way, before Lundgaard let loose. The Dane powered around the Circuit de Valencia in 1:21.370, followed by his teammate Fernandez, 0.299s behind.

The ART pair were the pick of Day 1, with Smolyar behind them in third, ahead of Zendeli and Alessio Lorandi. Devlin DeFrancesco, Yuki Tsunoda, Ferdinand Habsburg, Ticktum and Sargeant completed the top ten.

Class of 2019 duo Bent Viscaal and Simo Laaksonen will return for tomorrow’s session, which will include debuts for Enzo Fittipaldi, Theo Pourchaire and Dennis Hauger, amongst others. They’ll all hit the track at 9am (local time).