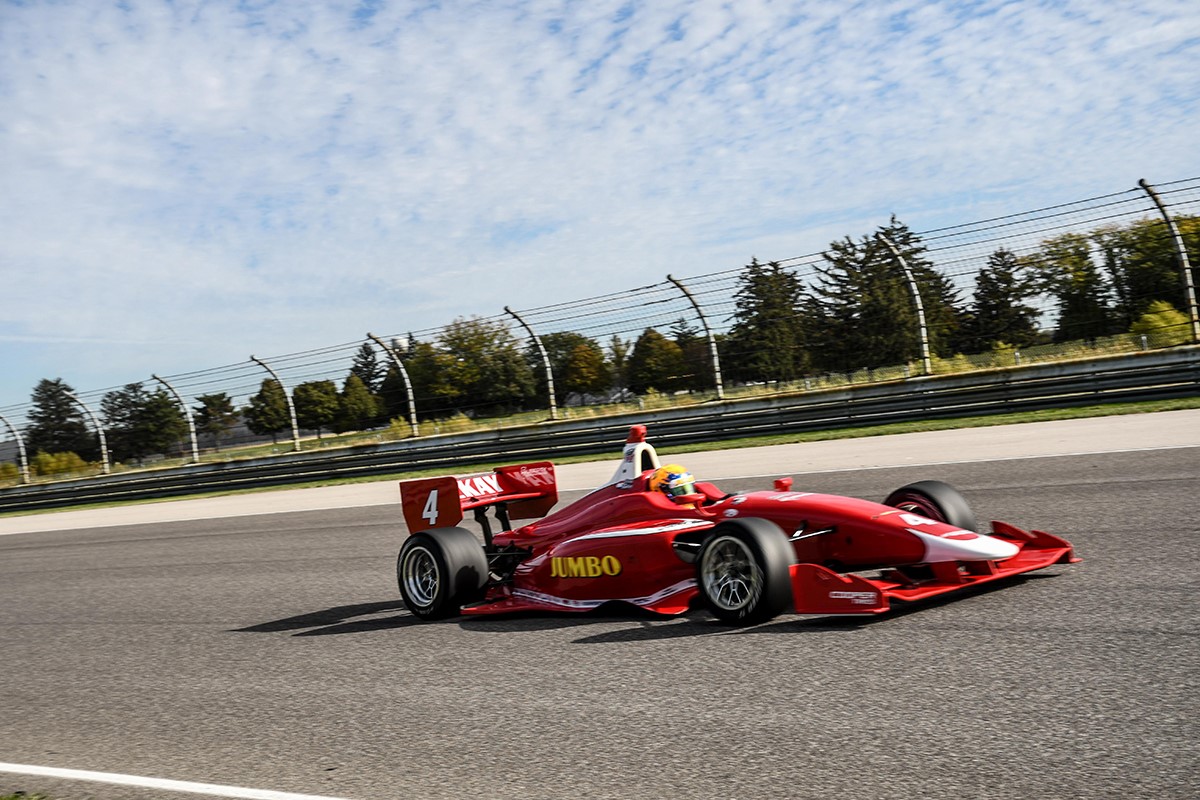 Each series was on deck for three 45-minute sessions, with the day beginning under a clear sky in cool temperatures before gradually warming up to a comfortable 70 degrees by mid-afternoon. The two-day test will conclude tomorrow.

Situation Normal as VeeKay Sets Indy Lights Pace
Rinus VeeKay came up just short of winning this year’s Indy Lights championship, losing out to Oliver Askew by a 21-point margin despite winning three of the final four races. But the 19-year-old Dutchman backed up an impressive midweek NTT IndyCar Series test with Ed Carpenter Racing by returning to his more familiar roots today and setting the fastest time in each of the three practice sessions for Belardi Auto Racing, with which VeeKay made his Indy Lights debut two years ago at the corresponding Chris Griffis Memorial Test.

“We found the setup in the last session and won the day, though that wasn’t the main goal," said VeeKay. “I was here to help (the team) evaluate their setup so that was a bonus. I tested here with Belardi two years ago, so it was great to be back with them. I hope I am going to IndyCar next season but this is two days of driving, two days of getting better and trying to improve that much more."

A quartet of Andretti Autosport drivers proved closely matched for most of the day with Robert Megennis, from New York, N.Y., usually at the head of the pack. Megennis, who qualified on pole position for one of the two IMS races in May, closed to within four tenths of VeeKay in the final, fastest session, followed by rookies Rasmus Lindh, from Sweden, and Singapore’s Danial Frost, both of whom made the step up from Indy Pro 2000 for the first time, and Egor Orudzhev, from Saint Petersburg, Russia, who returned to open-wheel cars for the first time since 2016 after racing closed-cockpit cars in the FIA World Endurance Championship for the past three years.

“It was a solid day," said Megennis. “It’s good just to get laps, especially around Indy. I try to improve every lap, every session that I do so we’ll keep going with that, try some different things on the car to see what’s fast and try to set ourselves up well for next year."

“It’s always a good experience, to get in a new car," added Lindh. “We found a good pace in the end and were just as quick as Megennis, who won a race this year. It was my first day in the car and the team was great. I want to just continue doing well. Now that we’ve learned the basics with the car, we can start work on smaller things. It’s a bigger car so you need to have more patience when it rotates, and it’s a lot more horsepower. It’s a big step, but it’s going well."

USF2000 Champion Eves Impresses on Indy Pro Debut
Three different drivers topped the timing charts during the trio of sessions for Indy Pro 2000, which drew its largest field of the year as the category, revitalized with a new equipment package in 2018 and a name change prior to this season, looks toward continued growth in 2020.

Colin Kaminsky, from Homer Glen, Ill., was quickest out of the box this morning, edging out fellow USF2000 graduate Hunter McElrea as Pabst Racing made an impression right away in the faster Tatuus PM-18 cars after winning back-to-back-to-back Team Championships in USF2000.

Series veteran Parker Thompson, from Red Deer, Alb., Canada, used his experience to excellent effect by topping the early afternoon session on his debut with DEForce Racing before sitting out the final period, during which recently crowned USF2000 champion Eves set the best time of the day for Exclusive Autosport. Eves’ time of 1:19.6386 represented an average speed of 110.253 mph and was within three tenths of Askew’s qualifying track record set in 2018.

“The first session was definitely a big learning curve, so I think I improved a lot and the car improved a lot for my driving in the second session," related Eves. “The transition to this car felt seamless, but that’s what it’s designed to be. Everything feels similar – the same steering wheel, the same pedals – you just have to get on the brakes more. The car is very similar mechanically but the braking and high-speed corners are different: you can go a lot harder. It’s really fun to drive, in the way that driving harder gets more time out of it. But we’ll be working with a different team tomorrow so it will be interesting to see the difference with the champions, RP Motorsport. That’s what these tests are about, the chance to work with new teams and get to know them.

“But my neck is destroyed right now," continued Eves. “I’m not used to the extra grip this car has, so we’ll be working on that in my training during the off season!"

Thompson’s time of 1:19.8591 remained good enough for second fastest ahead of New Zealander McElrea, whose second-fastest time in the final session, 1:19.8632, was good enough for third on the day, fractionally faster than teammate Kaminsky.

“It’s cool that I’ve gone P1 with a different team," said Thompson. “I’ve driven a lot of cars this year and this is a cap on another solid day. Good job by the DEForce crew, they gave me a solid car right out of the box. I don’t know what the future holds, but I seem to make the most out of these one-off opportunities, so I’ll just keep the ball rolling."

“I’m really thankful to everyone at Pabst Racing and all my backers for making this test possible," added McElrea, who lost out to Eves in the battle for this year’s USF2000 title by a scant five-point margin following an impressive debut campaign for the two Road to Indy rookies. “I love this car: it’s faster, with more grip than the USF2000 car and it just clicked with me straightaway. There’s a lot more mechanical and aerodynamic grip, and more power, but that all exponentially goes up together. It’s the same (Tatuus) chassis, so I have my same steering wheel and seat so that makes the learning process shorter. The Road to Indy does a great job of making the steps in the right amount."

British driver Raoul Hyman, a veteran of a variety of open-wheel series around the globe, impressed on his North American debut with the fifth fastest time of the day for Exclusive Autosport, with Phillippe Denes, from Carmel, Calif., also circulating within a half-second of the benchmark time for reigning champion team Juncos Racing.

Denmark’s Rasmussen Fastest in USF2000
Rasmussen, 19, was quickest among a 17-car USF2000 contingent for Jay Howard Driver Development, continuing the form which saw him win three races during a strong rookie campaign in 2019. In fact, Rasmussen scored more points than any other driver during the final half of the season. Quickest in all three sessions, Rasmussen set his fastest time of 1:25.1117, an average speed of 103.163 mph, in the early afternoon.

“We topped all three sessions by a good margin, so it’s a very positive start to 2020," said Rasmussen. “We didn’t have a great race here at IMS back in May, so I was looking forward to coming back here and seeing where the pace was. It’s really nice to see how far we have come in that amount of time. And I have developed quite a bit this year – this is one of the years in racing that I have developed the most. I have to thank Jay, Louis (D’Agostino) my engineer and everyone at Jay Howard Driver Development for developing me as a driver. I feel strong and have a lot of confidence going into next season. My mindset is the same as always: to win races. But now (in 2020), we are going for the championship."

“I can see how much I have progressed as a driver since we were here in May, and I think that progress counts for a lot," said Barrichello. “We switched teams for the last two rounds so now I feel as though the car is performing really well and we’re working hard with the team to reach that first position. I have a lot of confidence in myself and in the car so I can really go for the fast corners. It’s too early to predict the 2020 championship but it feels good to be up near the top, so I know that the hard work is paying off. I’ll work just that much more to get to the top position."

“It has been an amazing few days: just to be in Indy is something special, it’s a magical place," said Bouthoorn. “To drive here and have so much fun – and to have a successful day, I really can’t describe the feeling. I came from karting, so it’s a whole different story. When I saw the car for the first time, I thought it didn’t have much downforce, but when I drove it, it was amazing. It has so much grip and downforce that I couldn’t believe it. It’s been pretty easy to get used to the car, I felt at home right away, even with someone else’s seat in the car. It’s been great running with the Pabst team, I already feel at home so I hope we can do some great things next season."