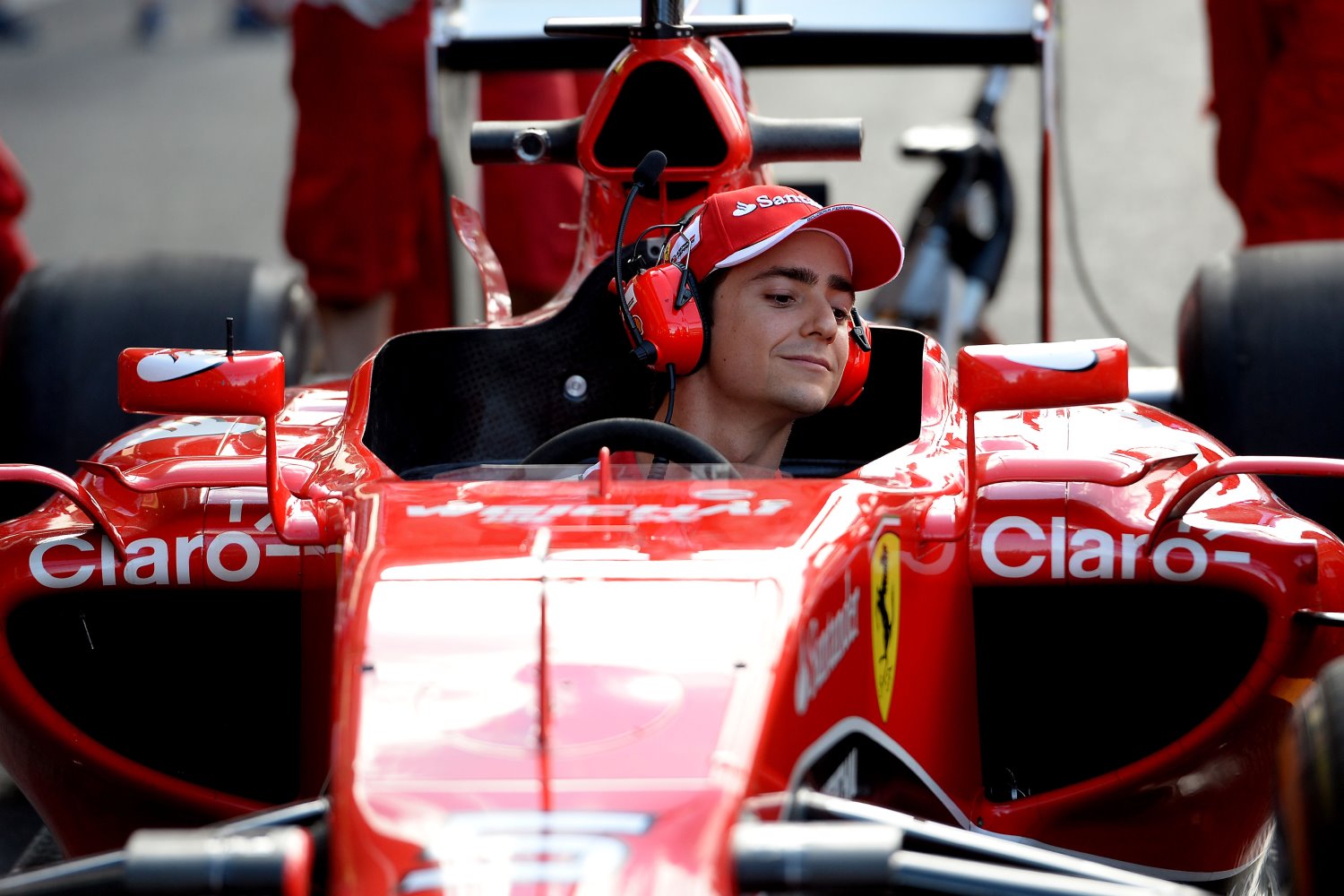 Esteban Gutierrez eyes the Claro sponsorship decal that he has brought to the Ferrari team. Claro and Telcel will pay for his ride at Haas next year. Both Mexican companies are owned by the richest man in the world, Carlos Slim, who is funding the ride for both Gutierrez and Sergio Perez.

Recognizing that in order for the Mexican GP to be successful, there must be Mexican drivers in good cars so the Mexican fans have someone to cheer for, Slim opened his checkbook and made it happen.

Meanwhile the only American on the F1 grid is in the slug Manor car, which is all he could get with the money he had.

10/24/15 Haas F1 will announce their second driver for 2016 this coming Friday evening in Mexico City. Look for the long-awaited confirmation of Mexican driver Esteban Gutierrez.

Esteban Gutierrez looks set to line-up alongside Romain Grosjean at debutants Haas F1 next season, but the team won't be making the announcement at this week's United States Grand Prix.

The signing of Gutierrez appears to be one of the paddock's worst kept secrets, with the Mexican reportedly set to be confirmed prior to his home grand prix next month.

He said: "Someone who has driven an F1 car, of the current generation, money (especially the money) is always important because it costs a lot of money, and North America is a nice place for a driver to come from."

Ferrari reserve driver Gutierrez certainly fits the bill, having raced with Sauber between 2013 and 2014, and hailing from Mexico.

Gutierrez's links with the Scuderia tie in well with Haas, who have a technical partnership with Ferrari, while the sponsorship money that Gutierrez will reportedly bring would certainly be welcomed by a team making their entrance into F1.

10/15/15 (GMM) Gunther Steiner has given the strongest hint yet that Haas will complete its first F1 driver lineup with Esteban Gutierrez.

The new American team has already signed up Lotus' Romain Grosjean for 2016, and hinted strongly that his teammate will be a Ferrari-linked test driver.

But there is speculation the only hold-up in announcing 24-year-old Gutierrez is the finalization of sponsor agreements with his related Mexican backers.

He denied, however, that Haas is obviously a de-facto Ferrari 'B team', given the openly strong links with the Maranello marque.

"We are not a Ferrari B team," Steiner insisted. "We stand on our own two feet, but we work closely with a very good and experienced technical partner in Ferrari."

(GMM) Romain Grosjean's switch to Haas for 2016 was all but confirmed on Sunday.

It is well known that Lotus, Grosjean's current team, is in detailed talks with Renault about a buyout.

Those discussions obviously sped up throughout the Singapore race weekend, aided by the Renault ambassador Alain Prost.

But the F1 legend insisted: "Nothing has been decided yet."

And Prost also told German television Sky on Sunday: "I will not be the team boss."

Also interviewed on Sunday was Renault's F1 chief Cyril Abiteboul, who did admit that talks between the carmaker and the Enstone team are looking promising.

It is rumored, however, that the new Renault works team will not have a French driver next year, as Grosjean is said to have decided to switch to Haas.

Abiteboul told France's Canal Plus in Singapore that a French driver is not a necessity for an international company like Renault, but he also admitted: "It is a shame that we cannot talk about Romain."

09/11/15 Regarding the reader note about Haas F1 Team's unwillingness to hire an American driver, to my knowledge having American drivers was never the stated intention of the team. It seems that because the team is U.S.-based, people have presumed that an American driver or two would inevitably be in the frame. I'll stand corrected if the preceding is wrong, but I don't believe Haas and Steiner have ever stated a desire to be Team USA. I do know they have repeatedly stated that they value experience (and probably sponsor considerations) over anything else.

Granted, I think Alexander Rossi is a fine candidate for Formula One and has clearly shown himself well in GP2 this year. I also would love to see an American F1 team along with a proper driver development program, funding, and the like, a direction Haas has at least for now, chosen not to go. Still, I can't really blame Haas F1 for wanting experience in starting what will be a monumental project. And at this point, that is something no American driver can really offer them.

09/11/15 Additional AR1.com sources have told us that the Haas drivers will be Gutierrez and Grosjean. If an American driver cannot land a ride with an American F1 team, there is almost zero chance an American will ever land a decent ride in F1 again.

09/07/15 Rumors in the Italian media suggest that Romain Grosjean has signed to drive for the new American Haas team alongside Esteban Gutierrez. We have updated our 2016 F1 Silly Season page.

(GMM) Esteban Gutierrez could be close to announcing his plans for 2016.

This year, after the Mexican lost his Sauber race seat, he signed up to be Ferrari's reserve driver.

And now it is reported the 24-year-old's next step could be to the new Ferrari-linked American entrant Haas, backed by his powerful Mexican sponsors.

Gutierrez wrote on Facebook: "This weekend I had an important meeting which will have a big repercussion in my professional life.

"Nothing that comes in my way will stop me, neither will change the person who I have the fortune of being," he added.

08/31/15 Finnish newspaper Ilta-Sanomat claims that Haas is now "very close" to agreeing a deal for 2016 with Esteban Gutierrez, the Ferrari reserve driver.

08/09/15 Incoming Formula 1 team boss Gene Haas has five drivers under consideration for race seats next year, with Esteban Gutierrez looking more likely than ever to return to Grand Prix action in his new team.

As fellow Ferrari F1 reserve driver Jean-Eric Vergne has committed to a deal with the rebranded DS Virgin squad in Formula E, Motorsport.com understands that Gutierrez is set to join Haas with backing from Mexican telecommunications giant Claro.

Gutierrez is part of the Escuderia Telmex system, which is also part of Carlos Slim's conglomerate businesses.

"We're down to five now, I think," Haas told motorsport.com of his shortlist of targets – which is still believed to include Force India's Nico Hulkenberg.

On the subject of his interest in Gutierrez, as well as the technical partnership with Ferrari, Haas said: "He's a Ferrari reserve driver, so Ferrari would be interested in seeing how he does and it kind of helps both parties.

"We get a driver who Ferrari thinks has a lot of potential and we can see how he does too."

On the subject of a timeframe for his driver line-up to be decided, Haas replied: "In the next four weeks or so, this month is when the real thought-proving, intense decision-making occurs.

"But we're also actually waiting for the current F1 teams to make their decisions before we will. You never know who'll become available.

"It seems like the bigger teams are putting in younger and younger drivers, so some of the more experienced drivers might become available." Motorsport.com